What are the effects of smoking while breastfeeding? 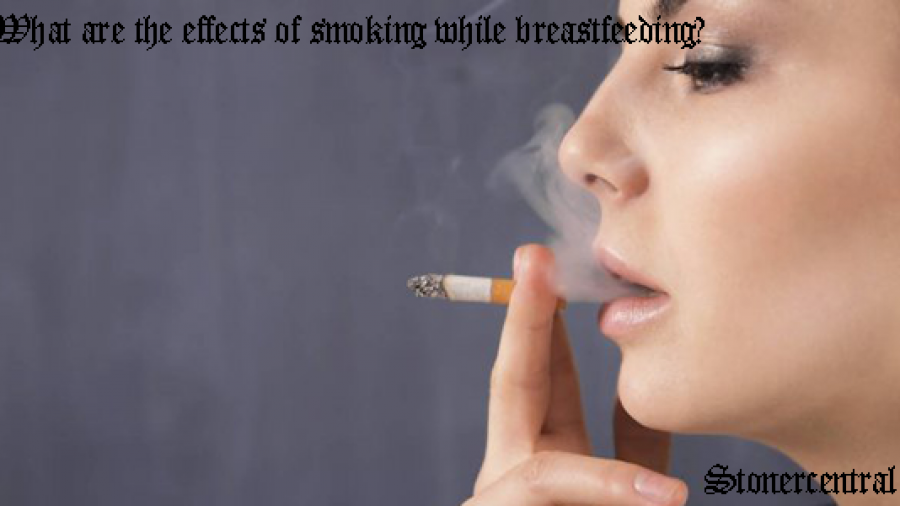 The early days with a baby can be stressful. Smoking is one way that many people alleviate stress. Nicotine, the psychoactive substance in cigarettes, is also one of the most addictive substances—and one of the hardest to quit.

The advice on smoking during pregnancy is clear—it is harmful to the baby and should be avoided. If you previously smoked, you might wonder if you can smoke while you are breastfeeding. If you had quit while you were pregnant but relapse after having your baby, should you still breastfeed?

Smoking not only affects a growing baby during pregnancy, but it might have drawbacks for a breast-feeding mom.

Smoking might reduce a breast-feeding mom’s milk supply. Passing nicotine and other toxins via breast milk is also associated with increased incidences of fussiness, nausea, and restlessness in babies.

Breast-feeding offers many advantages for a new baby, including a boosted immune system. Organizations like the World Health Organization recommend breast-feeding as the healthiest nutritional source for a baby in their first few months of life, and beyond.

If a new mother continues to smoke and chooses to breast-feed, there are several factors to consider.

How Much Nicotine Is Transmitted Via Breast Milk?

While some chemicals aren’t transmitted via breast milk, others are. An example is nicotine, one of the active ingredients in cigarettes.

Smoking’s Effects on Mom and Baby

Smoking not only transmits harmful chemicals to your baby via your breast milk, it can also affect a new mother’s milk supply. This might cause her to produce less milk.

Women who smoke more than 10 cigarettes a day experience reduced milk supply and changes in the milk’s composition.

Other effects associated with smoking and milk supply include:

Babies of women who smoke are more likely to experience altered sleep patterns.

Babies exposed to smoke via breast-feeding are more susceptible to sudden infant death syndrome (SIDS) and the development of allergy-related diseases like asthma.

Nicotine present in breast milk can lead to behavioral changes in a baby like crying more than usual.

A number of harmful chemicals have been detected in cigarettes, including:

There’s unfortunately little information available about how these may or may not be passed to a baby via breast-feeding.

E-cigarettes are new to the market, so long-term research hasn’t been conducted about their safety. But e-cigarettes still contain nicotine, which means they still might pose a risk to mother and baby.

Approximately 25% of American women of reproductive age smoke tobacco, and many continue to smoke during and after pregnancy despite the known potential harm to their own health and to their child’s health. These health threats remain after the child’s birth as the baby is exposed to nicotine and other toxins in both ambient air and breast milk.

Despite the fact that the amount of nicotine transferred into breast milk is more than double the quantity transferred through the placenta during pregnancy, there is strong evidence that breast milk itself provides protection: the incidence of respiratory illness among infants who were breastfed by mothers who smoked was lower when compared with babies who were formula fed. As it appears that the benefits of breastfeeding outweigh the risks of nicotine exposure, nicotine is no longer listed as a drug that is contraindicated during breastfeeding.

Women are strongly encouraged to breastfeed but the ones who smoke are more likely to have a lower milk supply, and those who do breastfeed tend to wean their babies earlier than women who don’t smoke. Studies indicate that smoking more than 10 cigarettes per day decreases milk production and alters milk composition. Furthermore, mothers who smoke are more likely to think that their milk supply is inadequate and are less motivated to breastfeed. Finally, breastfed babies whose mothers smoke more than 5 cigarettes daily exhibit behaviors (e.g. colic and crying) that may promote early weaning.

In addition, because smoking is associated with sleep disturbances in adolescents and adults, researchers have begun to look at the sleeping patterns of babies breastfed by mothers who smoke. They found that the infants of mothers who smoke just before nursing have shorter sleep times and altered sleep architecture.

Smoking is one of the toughest addictions to overcome, but millions of people have eventually been successful in doing so. It can be easier to quit while breastfeeding because certain substances in your system (prolactin and endogenous opioids) will reduce withdrawal symptoms.

You may also be able to use a nicotine replacement patch for part of the day and remove it three to four hours before breastfeeding. Talk to your doctor about this option if you don’t think you can quit on your own.

While there is still little evidence to suggest that smoking mothers has significant adverse effects on their infants, the lack of evidence may be due to the insufficiency of investigation. More research needs to done to address the effects of smoking and breastfeeding not only in the acute phase but also in the long-term, analyzing the possible developmental and behavioral impairments associated with nicotine exposure. Furthermore, there is a clear need for effective smoking cessation treatments for breastfeeding women and also awareness about the consequences of smoking.