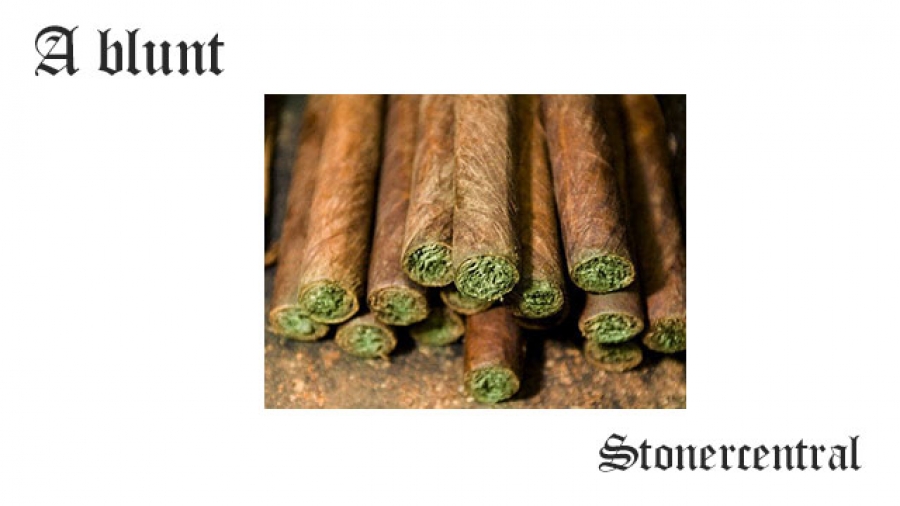 A blunt is a cigar that has been hollowed out and filled with ground cannabis. To construct a marijuana blunt, consumers can either purchase blunt wraps or manually empty a pre-rolled cigar or cigarillo and replace the tobacco with cannabis.

Here are some things to consider before you get out that tobacco leaf or hit the corner store for a blunt wrap:

What is a Blunt Made of?

Typically, blunts are rolled with the same tobacco leaf wrappers used for cigars.

Why Do They Call it a Blunt?

The term blunt originated with an American brand of cigars, Phillies Blunts, which helped popularize this method of consumption throughout cannabis culture. The Phillies brand manufactures a cigar called a blunt — and, over time, the term became tied to the practice of emptying the cigar of tobacco, filling it with cannabis, and smoking it.

What is the Difference Between a Blunt and a Joint?

Not sure what’s the difference between a blunt and a joint? There are a few, including:

Perhaps the most noticeable difference between blunts and joints is their appearance. The tobacco leaf wrappers used for blunts are usually dark brown or tan — while rolling papers, which are used for joints, are typically white if bleached or a lighter shade of tan if unbleached.

Combination of Tobacco and Cannabis

While it’s not uncommon for people to combine tobacco and cannabis in a joint that’s also known as a spliff, blunts are filled strictly with cannabis. Because there is already tobacco in the cigar paper used to roll a blunt, there’s no reason to add additional tobacco.

Do Blunts Have Nicotine?

Yes. There is a good chance that blunt smokers will be exposed to certain levels of nicotine from the tobacco leaf. In a 2016 study published in Drug and Alcohol Dependence, researchers analyzed the wrappers of five different cigar brands commonly used for rolling blunts. The total nicotine content across the cigar wrapper samples ranged from 1.2 to 6.0 milligrams per cigar.

Blunt wrappers have a heavier weight and are much sturdier than rolling papers. This allows much more cannabis — often 2 grams or more — to be wrapped in a single blunt than a joint.

Because of the thicker cigar paper, blunts burn much more slowly than joints, making for a longer smoking session. Combined with their larger size, blunts are a popular consumption method for larger groups.

How Much Does it Cost to buy a Blunt?

The price of a blunt or blunt wrap will vary depending on the brand, the amount per package, the size of the blunt, and the location where it’s sold. You can usually find blunts or blunt wraps at a gas station, convenience store, tobacco store, or head shop. Typically, the price will vary somewhere between US$1 and US$3.

Do Pipes Get You Higher than Blunts?

Some cannabis consumers may also wonder whether there’s a difference in the high created by blunts and other cannabis paraphernalia, such as pipes. The tobacco used in the production of blunts could create a head rush effect in some users, giving them the impression that blunts get you higher than pipes. However, the more realistic reason blunts tend to generate a more potent buzz is because they can hold more cannabis than your average pipe.

Is one better for you than the other?

You might argue that joints are better for you because there’s no tobacco in a joint, but the benefit is minimal.

There’s no safe way of smoking anything. Joints, spliffs, blunts, pipes, bongs — they all carry risks.

Are there other options?

With cannabis become increasingly accessible, you have more options than ever for consuming pot that don’t involve smoking.

Ingesting cannabis isn’t new. People have been making pot brownies and steeping marijuana leaves for tea for ages. These days, you have more options in areas with legalized cannabis, including gummies, lollipops, and capsules.

Just keep in mind that overindulging is a lot easier with edibles, so go slow, especially if you’re new to cannabis.

Cannabidiol oil, or CBD oil, is derived from cannabis. CBD oil doesn’t contain THC, which is the compound that makes you high, but you get all of the other benefits.

You can apply CBD oil to your skin to relieve pain or add it to food and drinks. You can also find CBD oil capsules.

Sprays are a newer way of using marijuana. Liquids are infused with CBD and THC to make sprays that you apply under your tongue.

The catch? This is a relatively new method, so there’s not much research on the safety of cannabis sprays.

There isn’t any long-term data available yet on the safety of vaping. And in recent months, it’s been linkedTrusted Source to serious illnesses and even death.

If you’re going to give it a try anyway, be sure to get your cartridges from a licensed dispensary. Avoid liquids containing additives, including coloring, flavoring, and scents.

Blunts, spliffs, and joints are the main players when it comes to rolled cannabis. While each is slightly different from the other, they all come with the negative effects of smoking.

To use marijuana and avoid the harmful effects of smoke, consider an alternative method. Just be sure to get your products from a licensed dispensary. Be smart with your dosing to avoid any other unsavory effects, too.