What are Cannabis Moonrocks? 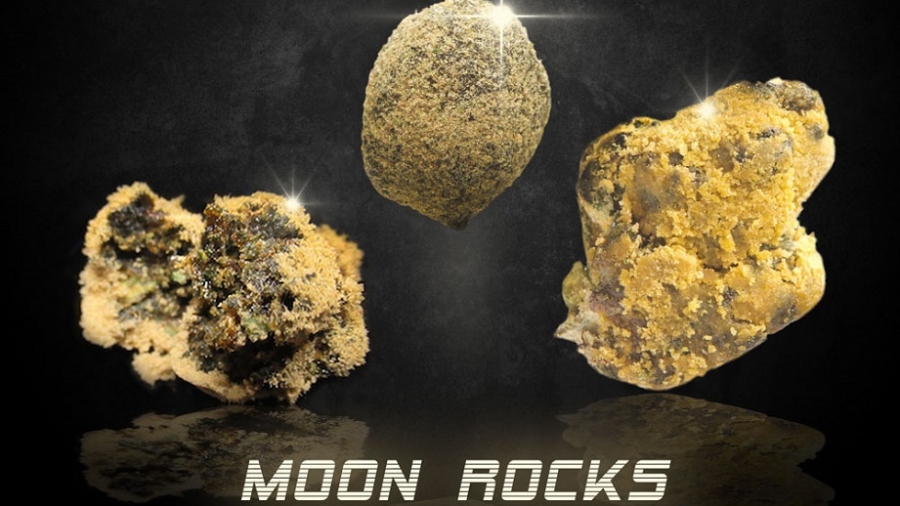 “You should take it slow if you’re trying moon rocks for the first time.”

“Don’t use a grinder on your moon rocks or you’ll lose a lot of kief.”

What are moon rocks?

Moon rocks are aptly named products in today’s cannabis marketplace, as their name is an accurate representation of their effects. Thanks to their signature combination of flower, extracts, and kief for a final dusting of THC-laden trichomes, moon rocks tend to give users to a decidedly “lunar” experience.

Moon rocks are often called “cannabis caviar.” The two terms, though frequently interchangeable, did originally designate two distinct products. “Cannabis caviar” may refer to moon rocks, or it may just refer to nugs covered in cannabis oil. In other words, cannabis caviar must be covered in kief to be considered moon rocks. So if you’re looking to buy moon rocks at a dispensary and you hear your budtender talking about “caviar,” it’s always best to double-check and make sure you’re getting kief-covered moon rocks.

Though moon rocks are a relatively new cannabis product, a wealth of variations are already out in the market. Canna-brands continue to engineer their own variations of the moon rocks concept with myriad combinations of cultivars and concentrates.

Kurupt and Dr. Zodiak met in 2013, and quickly went from collaborating on a mixtape to launching the first line of branded marijuana moon rocks. Since the advent of Kurupt and Dr. Zodiak’s Moonrocks, other brands and dispensaries have breached the stratosphere and launched their own lunar concoctions.

Just how potent are moon rocks?

You might expect moon rock weed to hold a large percentage of marijuana’s most desirable compound, THC. You’d be right. Most moon rocks contain more than 50% THC. Due to its high potency, you probably won’t want to offer a bowl of moon rock weed to a first-time smoker.

How much can I expect to pay for moon rocks?

As you may have guessed, moon rocks are usually a little higher priced per gram or per eighth, or 3.5 grams, than your normal top-tier flower. A gram of moon rock weed averages between $25 and $35, and an eighth averages between $90 and $100.

The terms caviar and moon rocks are sometimes used interchangeably. However, one technical difference exists between the two. Moon rocks are always a cannabis flower that’s been soaked in concentrate and then coated in kief, while caviar may or may not include the kief. Essentially, all moon rocks could also be considered caviar, but caviar without kief is not considered a proper moon rock.

How to smoke moon rocks

Smoking moon rocks isn’t necessarily complicated, but it does require some extra care and attention to detail. Here are some key dos and don’ts to keep in mind when smoking moon rock weed.

How to make moon rocks at home

Should you decide to try your hand at making moon rocks at home, you’ll need the following items:

Once you have all the necessary tools and ingredients, follow this Step-by-Step Guide to Making Homemade Moon Rocks:

1. Take the flower and apply your extract to the whole nug.

3. Roll the extract-covered flower in your kief. Use tweezers if necessary.

4. Take your kief- and concentrate-covered nug and set it aside to dry in a cool place, away from direct light or sunlight.