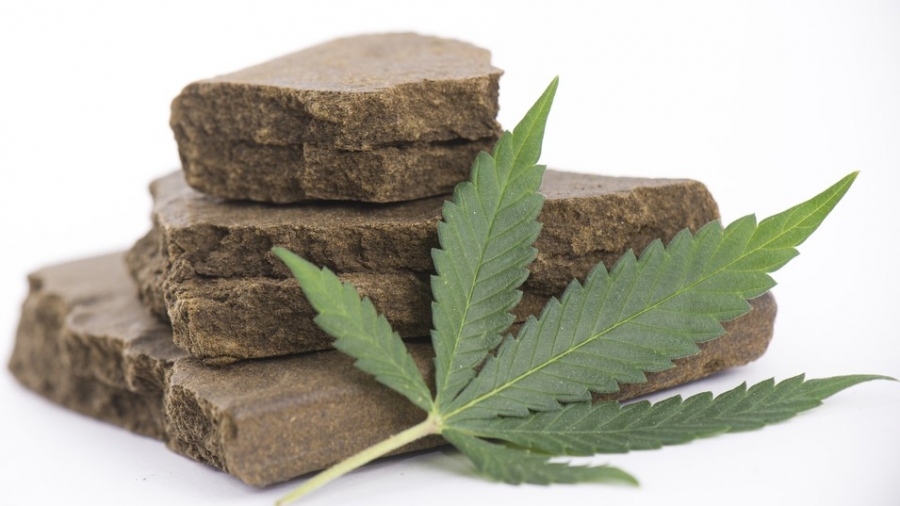 Hash is a cannabis product made from the plant’s trichomes. Trichomes are little growths on the plants filled with sticky resin. They resemble translucent hairs with a knob on the end. Hash comes from the word hashish. It describes compressed and processed marijuana material and includes more than the typical buds used in other forms of marijuana. Simply put, it is the separated resin from the marijuana plant.

Hashish is simply the waxy product formed when the cannabis trichomes (resin glands) are concentrated and compacted into a solid block. As well as cannabinoids, hash also contains small amounts of plant material and plenty of terpenes which help give the distinctive hash taste. Many will simply smoke some in a pipe or bong. Others will roll a thin ‘sausage’ of hash and lay it in a joint to supercharge it. Some people break small chunks of hash into a vaporiser and other prefer to cook with it. Hash is a powerful cannabis concentrate, a little goes a long way!

Hash has been used for thousands of years, ever since the first humans noticed the curious sticky by-product from the cannabis plant. Hash can be smoked, or used in cooking/edibles and and usually contains between 5-40% THC, often with higher CBD levels than traditional weed. The final levels of THC, CBD etc will depend on the cannabis genetics, grow conditions and the hash production techniques. Here is a link about hash types with some interesting info. For some cannabis lovers the rich aromatic scent and taste makes hash a unique treat. It’s easy to store, transport and enjoy.

In the 1980’s hash would be exported from some of the main production areas (Nepal, India, Pakistan, Afghanistan) with a unique seal embossed on the block of hash, and it would be wrapped often in red or gold packaging prior to export. It’s easy to cultivate home grown cannabis, so you can make your own hash at home if you like. Traditional hash imports from places like Afghanistan, Nepal and Morocco can still be found, often at competitive prices. You can find these traditional hash imports in The Netherlands and other countries too.

What are the health effects of hashish use?

The short-term effects of hashish use include problems with memory and learning; distorted perception (sights, sounds, time, touch); difficulty in thinking and problem solving; loss of coordination; and increased heart rate, anxiety, and panic attacks. The effects may be more intense due to the high concentration of THC found in hash and other concentrates.

THC in marijuana is strongly absorbed by fatty tissues in various organs. Generally, traces of THC can be detected by standard urine testing methods several days after a smoking session. In heavy chronic users, traces can sometimes be detected for weeks after they have stopped using marijuana or its concentrates.

The long term effects of hashish or marijuana concentrate use are not yet fully known; but, long-term marijuana plant-use has been studied.

How to Make Hash: 5 Easy Ways

There are several different techniques for making at-home hash, simply select the one that works best for your skills and the tools that happen to be at your disposal. These methods are some of the easiest to try.

This technique which uses both ice and water is sometimes called the “bubble” technique. It isn’t hard to learn how to make ice hash from trimmings. You need a bucket of ice water, stir continuously and add the weed. This can be done either with trimmings or with buds, although buds will produce higher-quality hash.

When you stir the weed and ice water mixture, the resin glands break off into the marijuana. Pour the entire mixture through a bubble bag, which is a very fine mesh strainer bag. The bag will collect the resin glands. These bubble hash tips will give you high-quality hash.

You can see the difference in quality between the two methods: The dry sift is a beautiful golden color whereas the dry ice has been contaminated with some plant material, making it green.

Once we break it open, we see the gooey Play-Doh consistency and the beautiful golden brown color that we’re looking for.

The dry sifting method begins by freezing and fully curing your marijuana. Make sure it’s cold; the colder it is, the easier those resin glands (trichomes) will break off. Using a screen, lie the weed across it. Spread out the weed and break it up.

Using a silkscreen, spread the weed around by shaking it. Ideally you should either put the screen in a box or make sure it has some kind of raised frame around it so as not to lose those precious pieces. The hash will go through the screen, which you can then collect.

Instead of using a silk screen to turn dry trimmings or buds into hash, try using a tumbler.  A tumbler is an electronic device that shakes your trimmings around and sifts them through a fine screen. You can expect a very nice, finely sifted collection of hash afterward, without going through all the effort of doing the dry sifting method by hand.

However, it probably isn’t worth investing in a tumbler if you are only producing small amounts of hash; it is probably less effort to do and clean up after the traditional screen method. Tumblers work best for large quantities of trimmings.

If you have a blender and some trimmings and buds to spare, give the blender method a try. First, fill up the blender halfway with plant matter. Then, fill it up with cold water and ice. Blend for 45 seconds, or as much as a minute, at full power, then let it sit for a few moments. Do this again a handful (three or four) times. You will get more hash the more times you repeat.

Pour the mixture into a large bowl using a strainer. This will get rid of most of the plant matter, but not all. Then, get a coffee filter and pour the remaining mixture into a jar, filling it about 65% full. Pour more water through the filter to fill the jar, letting the solids collect on the bottom for an hour. Remove it after an hour and gently pour out the top 65%, so you keep the matter at the bottom, but get rid of the excess water.

Using a funnel and a coffee filter, slowly pour the rest of the mixture into another jar. The idea is to collect the hash from the coffee filters. It may be easier if you dry it on the filter before removing it with a spoon or credit card.

Hand rolling is a simple yet effective technique. First, wash and rinse your hands thoroughly. Roll the buds between your hands while harvesting the plants. The hash gets stuck on your hands after doing this for a while. Now you can scrape it off your hands into a container. Squish the material  into a little ball (or a big ball, if you have a lot of buds to harvest).

There are several massively useful tips to remember when making at-home hash. First of all, when freezing the plant matter, make sure you freeze it well. Plant matter that is only cold — but not frozen — will not do well when making the hash.

Third, if you grow marijuana regularly, try letting the plant matter collect over time. This is especially the case if you already are trimming your plants as they grow. Collect that plant matter and keep it stored somewhere, but don’t turn it into hash just yet. Wait until the end of the grow season (or end of the year, depending on how much you’re planning to grow) and then turn it all into hash in one go. This will make the most hash and will be the most efficient as well.

Finally, to make the highest quality hash possible, after you’ve used the dry sift method, rerun it over a screen at 90 microns and then again at 73 microns. Do this separately. This will separate the hash from the plant materials, giving you an even more pure product.