Bong vs. Joint: which is better? 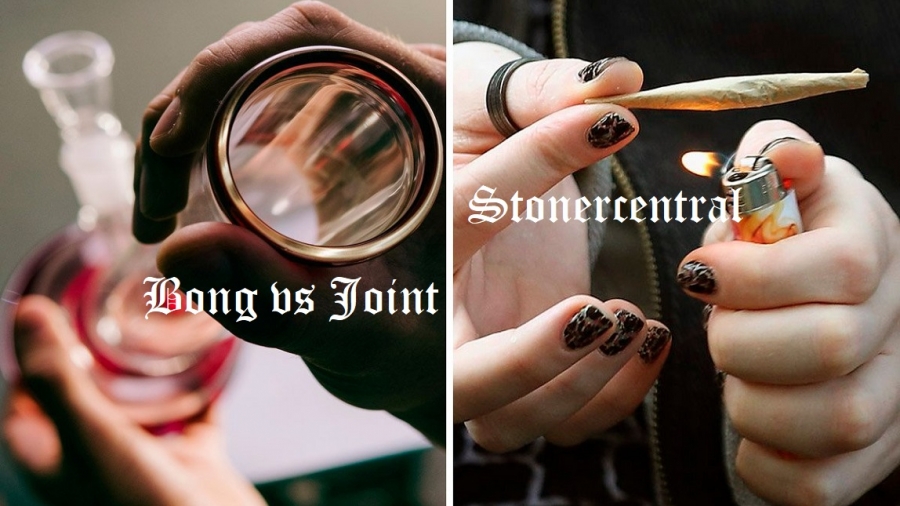 Those are impressive figures. And, with more and more states talking about legalization, it’s natural to assume those numbers will only go up.

Are you just starting out in the wonderful world of marijuana smoking?

Well, sooner or later, you’re going to find yourself choosing between a bong vs joint.

Everybody has their individual preferences when it comes to getting high. As such, there’s no ‘right’ or ‘wrong’ decision to be made here. There are, however, definite differences between the two smoking experiences.

Wondering about the key differences between blunts and bongs in your bid to get high?

Why is there a difference in effect when smoking bongs and joints?

Smoking a bong is not very complicated, but if you’ve never smoked a bong before then you probably don’t know exactly how to go at it. It is clear that smoking a bong is different from smoking a joint: whereas you take one (or maybe two) big hit(s) with a bong, joints last longer; it takes quite a few draws to finish a joint. Between those draws, the joint keeps burning, and smoke is wasted. Although this might not be a huge issue, the smoke that is lost accounts for a few big hits that you did pay for. If you compare bongs vs joints on efficiency, bongs clearly win.

An important reason for many bong-smokers to choose a waterpipe over the traditional joints is that you can get incredibly baked from a small amount of weed, without mixing it with tobacco! Not only is this much better for your health, but the resulting high is also much more pure and enjoyable.

For many people, a joint is the only true way of smoking cannabis. The slow-burning weed-cigarette that gets passed around is here to stay and the stoner culture is impossible to imagine without them. A joint has a few obvious advantages over bongs. You don’t need any special stuff like a pipe, bong or vaporizer; all you need is a rolling paper, a filter tip and a bit of weed. This enables you to roll and spark one up basically anywhere, whereas you can’t just carry your bong around in your pocket all day. A joint also burns slower, and is considered by many as a ritual that can’t simply be replaced by bongs, vaporizers or edibles.

But there are many stoners who worship their bong, and there are some good reasons. Smoking a bong also has many advantages over joints. Perhaps the biggest advantage is that it gets you extra high with the same amount of weed. A lot less smoke gets lost, so the cannabinoids reach your blood more and more effectively, which means you get higher. But it also has something to do with the way a bong is smoked: when smoking a bong, you try to smoke and inhale all smoke at once, which means you inhale much deeper than when smoking joints. The smoke goes deeper into your lungs, where the cannabinoids are absorbed into the blood stream much more effectively than in the upper part of your lungs. This means a bong saves you money.

Do you like tobacco? Probably not, and neither do we. So if you want to smoke a whole joint by yourself without tobacco, you’re going to have to put in quite a bit of weed to roll a decent joint. But if you have a bong, why not fill it up real quick and take a quick bong hit before you go to bed (or school, work..)? You only need a small amount of weed to get really high, really quickly!

Many people also ask us whether a bong or joint is better for wax or dabs. Our answer: BHO / Wax joints are cool, but they come nowhere close to properly dabbing using a bong or dab rig.

Smoking cannabis in a bong is healthier than smoking a joint. Especially if you’re used to mixing your weed with tobacco before rolling up your joint. People usually don’t smoke weed mixed with tobacco in bongs, so besides a better high, you inhale less toxic particles. Another reason why smoking a bong is healthier is that the smoke is filtered by the bong water before inhalation, with the result that some of the harmful particles (such as tar) in the smoke remain in the bong water and never reach your lungs. Of course you can never completely filter out all harmful particles.

Some bongs have a special design that filters the smoke more than once. These bongs also filter out more tar and other harmful substances from the smoke. Percolator bongs are also very popular. A good example with great value for money is our 4-arm Percolator Ice Bong by Black Leaf.

Keep reading for 7 factors that may decide which option is best for you.

The first step to deciding which is best, then, is knowing what’s involved!

Let’s start with joints, which are the classic way to smoke weed.

Here, you take some rolling paper (generally made from hemp or rice), place your weed on the inside and roll it up into a cigarette shape. Give the end a twist to seal it, light that up, and start smoking from the other end!

Bongs come in a wide array of shapes and styles.

In general, though, they’re elongated tubes with a chamber at the bottom (to put water inside) and a small ‘bowl’ on the side (in which to put your weed). You pack the bowl, light the weed, and inhale from the top. As you breathe in, the water bubbles and smoke fills the chamber, which you then suck into your lungs.

One of the primary differences between bongs and joints is the high itself.

Bongs are renowned for providing a swift and glorious high. All of the smoke they create goes straight into your lungs, which gets the cannabinoids into your system.

The high you get from joints is no less glorious, but it might take a while longer to hit. You absorb less smoke this way, which slows the rate of inebriation.

In fact, taking a giant bong hit might prove too much for total newbies. The amount of smoke created and the rate of consumption is like getting a punch to the head. Having said that, the same can happen when you draw too deeply from a joint.

As a basic rule of thumb, take it easy with both when you’re just starting out!

Cost is always a factor too.

After all, good weed doesn’t come cheap. When money’s tight, you want to get the best bang for your buck. If this is the case for you, then bongs might be the better bet.

The cannabinoids get into your system far quicker this way, which means you can get high off less weed. In other words, your money stretches farther.

This point relates to the last.

Joints create a level of wastage that you could argue amounts to wasted money too!

A bong hit is an individual endeavor that’s done and dusted in moments. You light up, breathe in, and bang, done. By comparison, joints are more about the experience.

You grind the weed, roll the joint, light it up, and smoke it over time.

You take pauses between draws and pass it around your friends. That’s all awesome, but it means the weed’s often burning without it being consumed. You’re basically burning money at the same time!

Another consideration is the skill involved in both processes.

Basically, rolling a joint is far harder than it looks! Mastering it takes practice, dexterity, and a steady hand. It’s all too easy to end up with a crumpled mess and wasted weed.

That’s bad news when you’re in a hurry to get high.

Bongs, by contrast, are ideal if you’re a newbie. You simply put some water in the bottom, pack in your weed and start smoking!

Joints might be fiddly to roll when you’re first starting out.

But they’re also beautiful in their simplicity. All you need is some paper, your weed, and a lighter. There’s nothing stopping you from having a smoke with those at your disposal.

Bong hits require more equipment (aka, the bong itself!) and are far more hassle overall.

They’re big and bulky, which makes them difficult to store and transport. Likewise, there’s also the danger of breaking them.

Finally, bongs are problematic when you don’t want people to know you’re smoking weed! It’s easier to hide a tiny joint than it is a giant bong.

We said it earlier, but it’s worth repeating.

Smoking a joint is a classic way to get high. It’s been used throughout time as a go-to mode of weed consumption, which lends it an air of mystique and charm.

It’s arguably a more social experience as well. As we noted, you often share a joint with your pals, passing it around and enjoying the growing high as time goes by. There’s less of that when you’re taking it in turns to hit the straight shot bong.

Time to Choose: Bong vs Joint!

Tens of millions of Americans are getting high every single day.

And, as marijuana becomes legalized, we can expect more people to start doing the same!

As someone new to smoking, it won’t be long before you come across the bong vs joint debate. Both are hugely popular ways to get high, but there are undoubted differences between the two.

Rather than one being better than the other, though, deciding which to try first is a matter of preference and circumstance. Hopefully, this article has highlighted the primary considerations when making your choice.