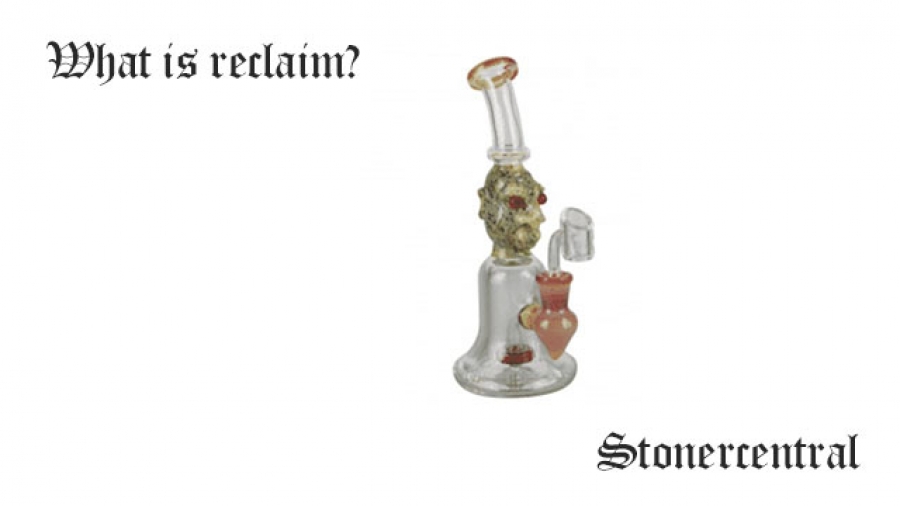 Simply put, reclaim is re-condensed concentrate that collects within your rig after a few dabs. Think of it like resin in a pipe. Every time you smoke your favorite dry pipe, more and more resin builds up, right? Concentrate reclaim is the same way, leaving behind more and more after every dab.

When it comes to reclaim, there are essentially two schools of thought: consuming the reclaim or throwing it away. Ultimately, it’s up to you to decide what to do with your reclaim. To make it a bit easier though, we’ve outlined the talking points for both.

How to Collect Reclaim

Collecting reclaim can be accomplished several different ways. There are even attachments for your rig, called drop-downs, which make the process a breeze. To collect reclaim from your drop-down, all you need to do is flip it over and apply light heat to the bottom. The heat will loosen the reclaim and it will fall out, just be sure to have a silicone pad in place to collect it.

If you don’t have a drop-down, you can still collect your reclaim fairly easily. All you need to do is pour some solvent (isopropyl alcohol or grain alcohol works well) in your rig, shake, pour out and evaporate. Once the solvent is evaporated you will be left with a nice collection of reclaim. If you are planning on eating your reclaim it’s probably best to use grain alcohol as your solvent because it is safer for human consumption than isopropyl.

What to do with Reclaim

Surprisingly, there are many uses for your reclaim. And if you’re concerned about potency, throw those doubts out the door. Reclaim actually has a pretty high level of cannabinoids that can get you feeling effects in no time.

According to a study conducted by MCR Labs, reclaim had as much as 65% total cannabinoids remaining. Of those cannabinoids, more than 95% were decarboxylated on average. Because of the high activation percentage in reclaim, you do not need to manipulate it to feel its effects, opening up a wide range of possibilities for consumption.

Can you smoke reclaim?

Great question. The short answer is: yes, it is safe to consume reclaim, and yes, you will get high from it. According to MCR Labs, a state-certified cannabis testing lab in Massachusetts, reclaim still has the main active cannabinoids that promote physiological changes.

The long answer is: yes, you can get high from smoking reclaim, but it will not be the tastiest or most enjoyable experience because truly, reclaim is oily sloppy seconds with zero terpenes and no taste or smell.

How to collect reclaim

There are couple ways to collect reclaim from your dab rig, both pretty simple.

The first way is to pour the water out of your rig and then pick out the little goldish clumps. Chances are there won’t be many as the majority of reclaim will be stuck to the inside of your device.

The second way to collect reclaim is to melt it out. All you need is a torch and some wax paper:

Just don’t let it get too hot because you don’t want to burn out the cannabinoids.

Is It Safe to Consume Reclaim?

Given its lack of combustion, dabbing is inevitably cleaner than smoking, but it’s not necessarily true that dabs and by extension reclaim are completely harmless. A 2017 study examined the formation of toxic byproducts produced when dabbing at normal temperatures. The researchers found that dabbing does produce toxic by-products as a result of the breakdown of terpenes like myrcene. The researchers focused on two substances, in particular, methacrolein and benzene. Benzene and methacrolein are both potent irritants which are found in areas with high levels of air pollution. Moreover, benzene is a known carcinogen and one of the chemicals which contributes to cancer in tobacco smokers.

The researchers found that dabbing at high temperatures (roughly 900 to 1100 degrees Fahrenheit) contains significant concentrations of both above-mentioned contaminants at levels higher than those known to cause problems. Given that your reclaim is made up of condensed dab vapor, it’s reasonable to assume that it could potentially give off some of these unfavorable chemicals when heated to high temperatures – that’s why low-temp dabbing is so important. The study didn’t look at other contaminants, but it’s likely that your vapor and reclaim contain more unpleasant surprises. Another study from 2017 found that 80% of dab samples contained residual pesticides or solvents.

If you want to use up your reclaim, it’s less likely to irritate your lungs if you make edibles or cannabis capsules. Additionally, on top of any risks from chemical contaminants, leaving organic material sitting in water over time has the potential to grow bacteria and fungus. Nobody wants to breathe or eat a bunch of bacteria and spores. If you want to ensure the safest experience, you shouldn’t leave your reclaim sitting for weeks before collecting it, regardless of how you use it.

Is Consuming Reclaim a Good Idea?

To sum up the science, right now we’re not completely sure about the safety of using your reclaim. Reclaim hasn’t been studied extensively and, in the absence of proper testing, we can’t be sure about exactly how it affects us. That being said, as long as your concentrates are quality and sourced from a trusted location, odds are you’ll be okay – just don’t consume reclaim that’s been sitting out for weeks in old rig water.

If you can’t get any dabs, reclaim could be a decent stand-in until you get your hands on the good stuff. However, despite what some cannabis pages say on this topic, reclaim might not be completely safe. While it’s not as strong – or as tasty – as fresh concentrate, it’s definitely going to get you high. If you’re already a regular smoker or dabber, you might think that’s worth the risk. However, that’s a decision you’ll have to make for yourself until scientists can clear things up.