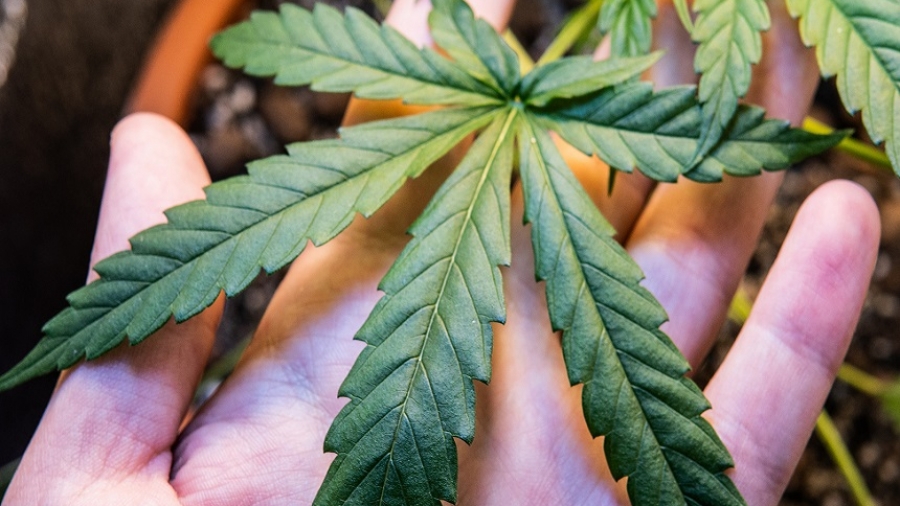 Cannabis plants are resilient. The plant grows successfully all over the globe in many different climates—it’s called “weed” for a reason.

But many problems can arise when growing cannabis, both indoors and outdoors. Bad weather, bugs, nutrient deficiencies, improper watering, and many other issues can pop up.

What’s wrong with my weed plant?

Many issues can arise when growing weed: discoloration of leaves is usually a sign of nutrient deficiency; tiny spots or webbing can mean a bug infestation; stunted growth can be a root problem.

Check out these articles on specific topics on how to troubleshoot issues with marijuana plants:

New growers are often guilty of giving their new weed plants too much love. As we’ve mentioned before, it’s called weed for a reason—a lot of times the answer is to just let the plant be.

This can manifest in overwatering. A new grower may overthink watering and water too much.

But the drying out of soil is important too—that’s how roots pull oxygen out of soil and into the plant. Additionally, standing water can stay in soil and cause root rot if not given enough time to dry out.

Remember to only water a plant if the soil is dry 1-2 inches down. Check out our guide on watering for more info.

Similar to overwatering, beginning growers also have the tendency to give plants too many nutrients. A common misconception is that more nutrients equals bigger plants, so just keep adding more and more!

A weed plant needs the correct balance of nutrients for it to grow properly and be healthy. If anything, err of the side of too little nutrients—it’s a lot harder to correct a plant with too many nutrients than to add more. Keep in mind that organic nutrients are a little more forgiving.

Also, keep an eye on the pH of water you use on your weed plants. This overlooked aspect can quickly lead to big problems.

Common problems to look out for when growing weed

Of course there are many problems that can arise when growing weed that should be fixed quickly. Weed plants are rather responsive, meaning they will show signs of distress if they aren’t getting the proper nutrients, have a bug infestation, or some other issue.

Check your cannabis plants regularly for issues. A good time to do this is when pruning, because you’ll be up close and personal with your plants.

Look at the main stalk of the plant. Stunted growth can be a sign of roots being bound or some other root issue. If one plant is considerably smaller than others or if you’ve been growing it for a while and it seems too small, it could have root issues.

Look for and remove dead or yellowing leaves, and weak or withering branches. If plants are flowering, look for bud rot and mold.

Inspect under fan leaves, as that’s where some bugs live—such as spider mites—and check where the stalk comes out of the soil, as some bugs live there too—in particular, root aphids.

Cannabis plant leaves should be a dark, vibrant green. Yellowing, discoloration, or spots on leaves are another big giveaway that your plant is sickly.

When cannabis plants don’t get the correct amounts of nutrients, they become stressed and more susceptible to bugs, mold, and other pathogens. Their growth may also be stunted, resulting in reduced yields.

Symptoms of nutrient deficiency often present as discoloration in leaves, so learning how to identify and treat these cannabis leaf problems and deficiencies can help your plants thrive.

Getting the right pH for marijuana plants

Marijuana plants can only absorb nutrients through their roots if the soil or other grow medium has the correct pH. If conditions are too acidic or too alkaline, certain nutrients won’t be available to roots. Over-fertilizing plants can quickly lead to pH problems and nutrient lockout.

Before attempting to diagnose any nutrient deficiency, test the pH of your water, as it can vary widely depending on the source. It should be between 6.0-7.0.

Then, check the pH of your soil or other grow medium.

If the pH is correct, your plants may have a nutrient deficiency.

Nutrients are classified as mobile or immobile depending on whether they can be translocated once they have been fully assimilated by the plant. A mobile nutrient stored in the older leaves of the plant can be moved to solve a deficiency in another part of the plant. Immobile nutrients will remain very close to where they were initially deposited.

Mobile nutrient deficiencies will show symptoms in older cannabis leaves at the base of the plant, while immobile nutrients will show the first signs of deficiency in newer growth at the top and outer branches of the marijuana plant. Knowing which nutrients are mobile and immobile will help you diagnose potential deficiencies.

Essential nutrients for marijuana plants and symptoms of deficiencies

Marijuana plants need several essential nutrients, so be sure to keep an eye on these signs and visual cues that could indicate a potential deficiency.

The most common nutrient deficiency in cannabis, nitrogen (mobile) is essential throughout the life of a plant, but especially during vegetative growth.

Phosphorus (mobile) is essential for photosynthesis and the release of stored energy in carbohydrates. While this deficiency is uncommon—usually developing due to pH being above 7.0—the result can be catastrophic for young plants and lead to stunted growth, delayed flowering, low yields, and poor resin production in mature plants.

Crucial to the production and movement of sugars and carbohydrates, potassium (mobile) is also indispensable to the process of cell division as well as transpiration, root growth, and water uptake.

Simply put, without it plants can’t grow. Nitrogen deficiency leads to increased internal temperatures in the foliage of the plant, which causes the plant to evaporate more moisture through its leaves to cool down.

Essential to cell integrity and growth, calcium (immobile) aids the flow of nitrogen and sugars through the plant. Calcium deficiencies in cannabis are usually found in hydroponic grows or outdoors in very wet, cool climates with acidic soil.

Magnesium (mobile) is the central atom in every molecule of chlorophyll, meaning that plants use it in very high amounts. It is crucial for absorbing energy from light, as well as helping enzymes create carbohydrates and sugars that produce flowers.

Essential to plant respiration and the synthesis and breakdown of fatty acids, sulfur (semi-mobile) plays a huge part in the production of oils and terpenes. It is uncommon to see a sulfur deficiency in cannabis, but these deficiencies are usually the result of a loss of phosphorus due to a high pH level in the root zone.

Needed only in trace amounts, copper (semi-mobile) aids in nitrogen fixation, carbohydrate metabolism, and oxygen reduction. This deficiency is rare.

Iron (semi-mobile) is essential for nitrate and sulfate reduction and assimilation, and a catalyst for chlorophyll production. Iron deficiencies are usually the result of improper pH levels or excess levels of manganese, zinc, or copper.

Manganese (immobile) helps utilize nitrogen and iron in chlorophyll production as well as aiding in oxygen reduction. Manganese deficiency is rare and usually caused by high pH or an excess of iron.

A player in two major enzyme systems that convert nitrate to ammonium, molybdenum (mobile) is used by cannabis in very small amounts. Zinc deficiencies are rare and can occur as the result of cold weather.

Zinc (immobile) is crucial for sugar and protein production, as well as the formation and retention of chlorophyll and healthy stem growth. Deficiency is quite common, especially in alkaline soils and dry climates, and is usually the result of high pH levels.

What is nutrient lockout and how to fix it

Nutrient lockout occurs when cannabis plants can’t take up nutrients from the soil. There are two primary causes of nutrient lockout:

When plants first show signs of nutrient lockout, you’ll need to act quickly to reverse it and free up nutrients, otherwise, they will begin to wither and can die.

How to identify nutrient lockout in cannabis plants

Nutrient lockout will resemble a nutrient deficiency—plants will be weak and flimsy with stunted growth. Any yellowing or curling of the leaves also indicate that the plant is experiencing nutrient lockout. Cannabis plants may look like they don’t have enough nutrients when in fact they have been given too much.

When identifying nutrient lockout, test the pH of your water, as it can vary widely depending on the source. It should be between 6.0-7.0. When the pH is too high or too low, nutrient availability plummets and your plants can’t absorb nutrients.

If pH is off, you can raise or lower it with pH Up or pH Down.

Then, check the pH of your soil or other grow medium.