How to Make Live Resin from Fresh Buds 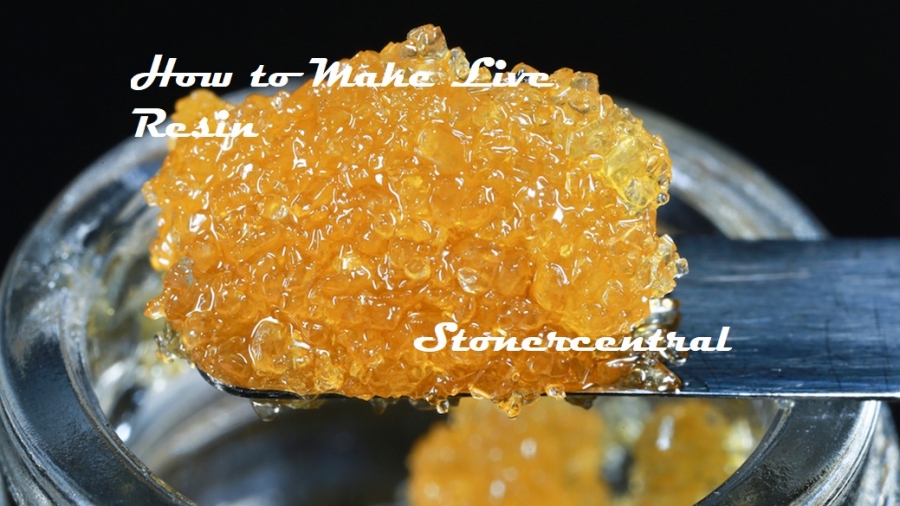 Live resin is a cannabis concentrate. The main difference of this concentrate is that it’s made using fresh cannabis flowers instead of buds that have been dried and cured. This makes for a concentrate with a higher concentration of terpenes and more complex aromas/flavours.

Live resin is made using fresh flowers that are flash frozen right after harvest and are kept at freezing temperatures during the entire extraction process.

There are essentially two kinds of terpenes; monoterpenes and sesquiterpenes. The former are aromatic compounds that give off more light, floral scents aromas, and include compounds like myrcene, limonene, terpinolene and linalool.

Sesquiterpenes, on the other hand, are heavier compounds that produce stronger aromas similar to those found in pepper, oregano and hops. Sesquiterpenes include caryophyllene and humulene, for example.

Recent research done at the University of Mississippi shows that drying and curing cannabis can lead to the loss of up to 55 % of the plant’s essential oil.

The researchers also found that essential oil made using fresh cannabis has a higher concentration of monoterpenes than that made using dried flowers (which was richer in sesquiterpenes). This is because monoterpenes are smaller and evaporate more quickly during the drying/curing process.

By using fresh cannabis, extraction artists are able to create a new concentrate that outshines others in terms of flavour and aroma.

HOW LIVE RESIN IS MADE

Live resin is made like regular BHO, using butane as a solvent to separate the trichomes from cannabis plant material.

The process of making BHO is extremely dangerous, mainly because it involves heating butane, an extremely flammable substance, in order to remove as many traces of it from the final concentrate.

Below, we’ll explain the basic process of how BHO and live resin are made. However, we do not recommend you try to replicate these process at home, no matter how easy or safe they seem to be.

This is purely for informational purposes.

How is live resin different from other weed concentrates?

Typically, once a cannabis plant has been harvested, it is then cured and dried, but this process also damages a plant’s terpene profile. When you purchase cured concentrates, you are buying a product that lacks the true essence of a cannabis plant. When a plant is cured, manufacturers wait a certain amount of time to allow the weed to wick itself of moisture and chlorophyll prior to the extraction process.

During this period, the plant’s trichomes are exposed to heat, oxygen, physical agitation and light. All of these factors help degrade terpenes, so the concentrate you receive lacks the aroma of the plant and also ensures you miss out on potentially therapeutic ingredients.

Live resin is typically a dark yellow color. It is a more malleable concentrate, sitting somewhere between a sauce and a wax—not too wet and not quite like taffy.

Like all cannabis concentrates it is extremely sticky, so you will need a dab tool to handle it. Depending on the producer, some live resins may have a runny consistency and some may be more solid or waxy.

What role do terpenes play?

There are essentially two kinds of terpenes; monoterpenes and sesquiterpenes. The former are aromatic compounds that give off more light, floral scents aromas, and include compounds like myrcene, limonene, pinene, terpinolene, linalool, to name a few.

Sesquiterpenes, on the other hand, are heavier compounds that produce stronger aromas similar to those found in pepper, oregano and hops. Sesquiterpenes include caryophyllene and humulene, for example.

By using fresh cannabis, extraction artists are able to create a new concentrate that outshines others in terms of flavor and aroma.

A study by the University of Mississippi, published in 1996, looked at what happens to a cannabis plant’s terpene content during the drying process. In the study, the authors harvested 60 grams of weed from the same plant and grouped them into four categories; each of which consisted of 15 grams:

Next, the four batches were steam-distilled, and the extracted oil was analysed. It is important to note that steam distillation only extracts a plant’s terpenes. The main terpenes that were removed included myrcene, limonene, linalool, and caryophyllene.

Unsurprisingly, the fresh weed had the highest terpene content, and most of the terpenes evaporated during the first week. There was little in the way of evaporation after that point.

Overall, the study discovered that drying made changes to the relative terpene concentration. Monoterpenes, known for being small and light (such as limonene) evaporated quickly. Sesquiterpenes, known for being large and heavy (such as caryophyllene) took much longer to evaporate, which meant they comprised a significant percentage of the oil after the drying process.

More specifically, they found that drying a cannabis plant for a week at room temperature resulted in a 31% loss of terpenes.

Butane Hash Oil is made by tightly packing cannabis flowers into a container with a small opening and “blasting” or pouring liquid butane into the container.

The butane works as a solvent and separates the cannabinoid and terpene-rich trichomes from the plant matter to create a highly concentrated form of cannabis.

The resulting mixture is then heated in order to remove as much of the solvent as possible. This is arguably the most dangerous part of the procedure, as butane is extremely flammable.

Once as much of the solvent has been removed as possible, the remaining mixture is then poured into a tray where it is left to rest and settle into a thin, gold, and transparent sheet. This product is usually called “shatter” or “pull n’ snap,” depending on its consistency.

Alternatively, some labs will “whip” the mixture in order to remove the butane. This results in a richer, creamier concentrate often sold as “wax” or “butter.”

Professional extraction labs rely on specialized equipment that has been carefully designed to manage this entire process.

The flowers are also kept at freezing temperatures throughout the entire extraction process.

In order to maintain these temperatures, extraction labs use specialized equipment. Precision extraction solutions, for example, use a special extractor that features 4 chambers.

The first chamber contains the butane which is chilled to extremely low temperatures. This butane is then pushed into the second chamber which contains the frozen cannabis buds, before passing into a third chamber where the concentrate is purified and stripped of all fats, lipids, and waxes.

Finally, the mixture is passed into the final chamber where it is heated slightly with water to remove any remaining solvents.