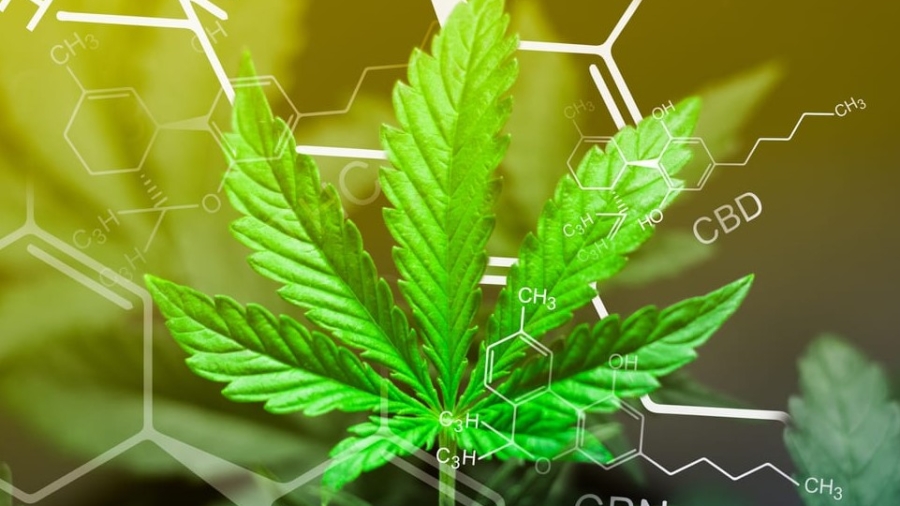 Cannabis is a natural product, the main psychoactive constituent of which is tetrahydrocannabinol (Δ9-THC). The cannabis plant (Cannabis sativa L.) is broadly distributed and grows in temperate and tropical areas. Together with tobacco, alcohol and caffeine, it is one of the most widely consumed drugs throughout the world, and has been used as a drug and a source of fibre since historical times. Herbal cannabis consists of the dried flowering tops and leaves. Cannabis resin is a compressed solid made from the resinous parts of the plant, and cannabis (hash) oil is a solvent extract of cannabis. Cannabis is almost always smoked, often mixed with tobacco. Almost all consumption of herbal cannabis and resin is of illicit material. Some therapeutic benefit as an analgesic has been claimed for cannabis, and dronabinol is a licensed medicine in some countries for the treatment of nausea in cancer chemotherapy. Cannabis products and Δ9-THC are under international control.

The term “phytocannabinoid” has been proposed for the natural components of the plant and “endocannabinoid” for the components synthesized in animals and humans that are the endogenous ligands for cannabinoid receptors cannabinoids in plants are substances that show a carbocyclic structure with 21 carbon atoms and are usually formed by three rings: cyclohexene, tetrahydropirane and benzene. Cannabinoids contain aromatic oxygenated hydrocarbons and do not contain nitrogen. δ9-thc is the cannabinoid responsible for the main psychoactive effects of many pharmacological products. in some Cannabis varieties, the additional cannabinoid homologues substitute the pentyl group usually joined to the aromatic ring with a propyl. Chemical composition of C. sativa is complex because it contains four hundred chemical products (mono- and sesquiterpenes, sugars, hydrocarbons, steroids, flavonoids, nitrogenated complexes and amino acids, and a total of sixty six cannabinoids, with δ9-THC as the psychostimulant in highest proportion. the main cannabinoids are δ9-tetrahydrocannabinol, δ-8-tetrahydrocannabinol (δ8-THC), cannabidiol (CBD) and cannabinol (CBN). Other cannabinoids present in the plant are cannabichromene (CBC), cannabiciclol (CBL), cannabigerol (CBG), cannabigerol monomethyl ether (CBGM), cannabielsoin (CBE), cannabinodiol (CBND), cannabitriol (CBT), dehydrocannabifuran, and cannabicitran, that appear in variable amounts according to the Cannabis variety.

Other closely related substances that occur in cannabis include cannabidiol (CBD) and, in aged samples, cannabinol (CBN), both of which have quite different pharmacological effects to THC. Other compounds include the cannabivarins and cannabichromenes; they are all collectively known as cannabinoids. Unlike many psychoactive substances, cannabinoids are not nitrogenous bases.

Cannabis sativa is dioecious: there are separate male and female plants. The THC is largely concentrated around the flowering parts of the female plant. The leaves and male plants have less THC, while the stalks and seeds contain almost none. Plants have characteristic compound leaves with up to 11 separate serrated lobes. Imported herbal cannabis occurs as compressed blocks of dried brown vegetable matter comprising the flowering tops, leaves, stalks and seeds of Cannabis sativa. Cannabis resin is usually produced in 250-g blocks, many of which carry a brandmark impression. Cannabis oil is a dark viscous liquid.

The pharmacology of cannabis is complicated by the presence of a wide range of cannabinoids. At small doses, cannabis produces euphoria, relief of anxiety, sedation and drowsiness. In some respects, the effects are similar to those caused by alcohol. Anandamide has been identified as the endogenous ligand for the cannabinoid receptor and has pharmacological properties similar to those of THC. When cannabis is smoked, THC can be detected in plasma within seconds of inhalation; it has a half-life of 2 hours. Following smoking of the equivalent of 10–15 mg over a period of 5–7 minutes, peak plasma levels of Δ9-THC are around 100 μg/L. It is highly lipophilic and widely distributed in the body. Two active metabolites are formed: 11-hydroxy-Δ9-THC and 8β-hydroxy-Δ9-THC. The first is further metabolised to Δ9-THC-11-oic acid. Two inactive substances are also formed — 8α-hydroxy-Δ9-THC and 8α,11-dihydroxy-Δ9-THC — and many other minor metabolites, most of which appear in the urine and faeces as glucuronide conjugates. Some metabolites can be detected in the urine for up to 2 weeks following smoking or ingestion. There is little evidence for damage to organ systems among moderate users, but consumption with tobacco carries all of the risks of that substance. Most interest in the adverse properties of cannabis has centred on its association with schizophrenia, although it is still unclear if there is a causative relation between mental health and cannabis. Fatalities directly attributable to cannabis are rare.

Herbal cannabis imported into Europe may originate from West Africa, the Caribbean or South-East Asia, but cannabis resin derives largely from either North Africa or Afghanistan. Cannabis oil (hash oil) is often produced locally from cannabis or cannabis resin by means of solvent extraction. Intensive indoor cultivation has become widespread in Europe and elsewhere. This is based on improved seed varieties and procedures such as artificial heating and lighting, hydroponic cultivation in nutrient solutions and propagation of cuttings of female plants. It leads to a high production of flowering material (sometimes known as ‘skunk’). As with other naturally occurring drugs of misuse (e.g. heroin and cocaine), total synthesis is not currently an economic proposition. No precursors to THC are listed in the United Nations 1988 Convention against Illicit Traffic in Narcotic Drugs and Psychotropic Substances.

Cannabis is usually smoked, often mixed with tobacco or in a smoking device (bong). Because THC has a low water solubility, ingestion of cannabis leads to poor absorption. The average ‘reefer’ cigarette contains around 200 mg of herbal cannabis or cannabis resin.

In many countries, herbal cannabis and cannabis resin are formally known as marijuana and hashish (or just ‘hash’) respectively. Cannabis cigarettes may be termed reefers, joints or spliffs.Street terms for cannabis/cannabis resin include bhang, charas, pot, dope, ganja, hemp, weed, blow, grass and many others

Although the leaves of Cannabis sativa are reasonably characteristic, cannabis and cannabis resin can both be positively identified by low-power microscopy, where the appearance of glandular trichomes and cystolithic hairs is diagnostic. The Duquenois test is considered to be specific for cannabinols. It is based on the reaction of cannabis extracts with p-dimethylbenzaldehyde. This produces a violet blue coloration that is extractable into chloroform. The mass spectrum of THC shows major ions at m/z = 299, 231, 314, 43, 41, 295, 55 and 271. Using gas chromatography, the limit of detection of THC in blood is 0.3 μg/L.

Cannabis and cannabis resin are listed in Schedules I and IV of the United Nations 1961 Single Convention on Narcotic Drugs. In Article 1, Paragraph 1, of that Convention, cannabis is defined as: ‘The flowering or fruiting tops of the cannabis plant (excluding the seeds and leaves when not accompanied by the tops) from which the resin has not been extracted, by whatever name they may be designated.’ Cannabis resin is defined as: ‘The separated resin, whether crude or purified, obtained from the cannabis plant.’ Along with a number of its isomers and stereochemical variants, Δ9-THC is listed in Schedule I of the United Nations 1971 Convention on Psychotropic Substances.

Tinctures of cannabis (ethanolic extracts) were once common, but were removed from pharmacopoeias many years ago. Herbal cannabis (known as ‘cannabis flos’), with a nominal THC content of 18 %, is available as a prescription medicine in The Netherlands. It is indicated for multiple sclerosis, certain types of pain and other neurological conditions. An extract of cannabis (Sativex) has been licensed in Canada.

Another cornerstone in cannabinoid research was the identification of the specific binding sites of d-9-THC in the brain [Devane et al. 1988], which was followed by the cloning of cannabinoid 1 receptor (CB1R) [Matsuda et al. 1990]. This system was named the ‘cannabinoid receptor system’ due to the binding affinity of d-9-THC to these receptors as a partial agonist. Shortly after, a second receptor, CB2R, was discovered [Munro et al. 1993]. Around the same time, the existence of the endocannabinoid system was confirmed by Devane and colleagues following the extraction of a molecule, an ethanolamine of arachidonic acid (AEA), which bound to these receptors [Devane et al. 1992]. This endocannabinoid agonist was given the name ‘anandamide’, based on a Sanskrit word meaning ‘bliss’. Mechoulam and colleagues isolated the second endocannabinoid neurotransmitter, 2-arachidonylglycerol (2-AG), 3 years later [Mechoulam et al. 1995]. Research in more recent years has shown that d-9-THC, as a partial agonist, resembles anandamide in its CB1 affinity, albeit with less efficacy than anandamide, whilst displaying even lower efficacy at CB2Rs than at CB1Rs in vitro [Pertwee, 2008].

CB1Rs are mainly in the brain, particularly in the substantia nigra, the basal ganglia, limbic system, hippocampus and cerebellum, but are also expressed in the peripheral nervous system, liver, thyroid, uterus, bones and testicular tissue [Russo and Guy, 2006; Pagotto et al. 2006; Pertwee, 2006]. CB2Rs are mostly expressed in immune cells, spleen and the gastrointestinal system, and to some extent in the brain and peripheral nervous system [Izzo, 2004; Pertwee, 2006]. Interestingly, both CB1 and CB2Rs are also found in human placenta and have been shown to play a role in regulating serotonin transporter activity [Kenney et al. 1999]. Indeed further research has revealed that the endocannabinoid system also plays a significant role in various aspects of human reproduction [Taylor et al. 2010].

In the brain, CB1Rs are found at the terminals of central and peripheral neurons, where they mostly mediate inhibitory action on ongoing release of a number of excitatory and inhibitory dopaminergic, gamma-aminobutyric acid (GABA), glutamatergic, serotoninergic, noradrenalin and acetylcholine neurotransmitter systems (Figure 1). Because of the involvement of these systems they affect functions such as cognition, memory, motor movements and pain perception [Howlett et al. 2002]. The release of endocannabinoids, such as AEA and 2-AG, from the postsynaptic sites to the synaptic cleft occur in response to elevation of intracellular calcium and they then act as retrograde neurotransmitters on presynaptically located CB1Rs to maintain homeostasis and prevent the excessive neuronal activity [Howlett et al. 2002; Terry et al. 2009]. They are then rapidly removed from the extracellular space by cannabinoid transporters, often referred to as anandamide membrane transporters, which facilitate their breakdown by internalizing the molecule and allowing access to fatty acid amide hydrolase [Pertwee, 2010]. Despite its significance in the endocannabinoid system, little is known about the cannabinoid transporters.

When cannabis is used, d-9-THC as a partial agonist binds to CB1R and acts in a less selective manner in inhibiting the release of neurotransmitters normally modulated by endocannabinoids such as AEA and 2-AG. It has been putatively suggested that it may also increase the release of dopamine, glutamate and acetylcholine in certain brain regions, possibly by inhibiting the release of an inhibitory neurotransmitter like GABA onto dopamine, glutamate or acetylcholine-releasing neurons.