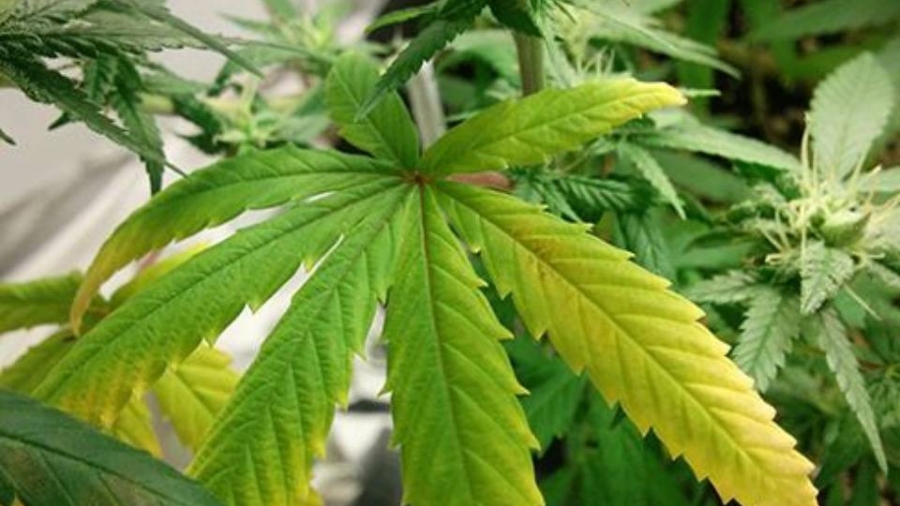 Sometimes called “yellow leaf spot” or “leaf septoria,” this condition is caused by a fungus (or sometimes a bacteria) that attacks cannabis plants and usually appears in warm, wet weather. The symptoms first appear on the bottom leaves of the plant.

The spots may have darkened borders and may have a hard growth in the middle like a little pimple, but the thing that makes the spots the most unique is they are often very uniform, like little circles. Each spot is the receptacle of a spore (ewwww) which look like tiny dark specks in the center of each spot.

Although the spots often appear yellow like in the picture below, they will start turning brown over time. So if you see round brown spots on your cannabis leaves it could also be caused by leaf septoria.

This fungus spores may stay in the soil over the winter, and attack your plants in the summer. Spores are also easily spread by wind and rain.

Causes of Yellow Leaves (From Most to Least Common)

Growers who don’t make sure their pH stays in the right range will often run into nutrient deficiencies, even if they’re starting with a pure source of water and good soil!

These symptoms look like nutrient deficiencies but are actually caused by incorrect pH!

Another common culprit of yellow leaves from incorrect pH is a potassium deficiency. Cannabis plants love lots of potassium, especially in the flowering stage, but nearly all cannabis-friendly nutrient systems contain plenty of potassium. If you’re adding nutrients to the water, this deficiency is almost always the symptom of a pH problem.

This is also a potassium deficiency, even though it looks a little like nutrient burn (too high levels of nutrients). The main clue is the yellow striping on the leaves, which tends to get worse over time until leaves are mostly yellow. Another clue is the brown tips go in further than typical nutrient burn.

Stripes on the leaves (click for close-up) indicates that this is not a Nitrogen deficiency, even though the symptoms are similar. In this case, the symptoms were caused by the pH being way too high.

It’s much more common to over-water than under-water cannabis plants, and the symptoms are very similar. In either case, the solution is to learn how to water your plants exactly the right amount at the right time!