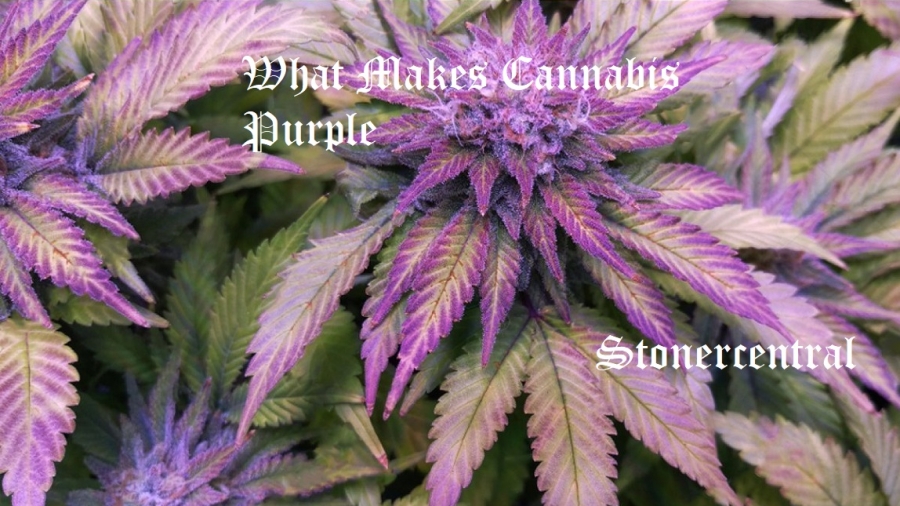 In these modern times of cannabis consumption bad information still runs rampant, and few things in the world of weed have as large a mythic standing as purple bud. This seemingly simple topic can actually be a bit convoluted, starting with, what is purple bud? The short answer is cannabis flowers that exhibit a darker, purple-tinged hue. However, it is not always the shade most people think of as “purple.”

For many years, the only purple varieties of cannabis were those that had been grown outdoors and subjected to cold conditions. Many strains of cannabis purple to some extent when exposed to cold; now, selective breeding programs have yielded cannabis genetics that are purple even in normal environmental conditions.

Anthocyanins are a group of around 400 water-soluble pigment molecules that, due to their structure and biosynthesis, are classed as flavonoids. They appear red, purple or blue according to their pH (in acidic pH levels they appear more red, in neutral conditions purple, and in alkaline more blue).

Flavonoids are generally yellow in appearance, hence their name, which is derived from the Latin word for “yellow”, flavus, and does not indicate any association with flavour. In fact, flavonoids are usually extremely bitter, and are generally associated with pigmentation.

Cannabis is what we consider to be a high plant (as in tall, no word-play here). High plants all possess a vascular system consisting of a xylem and phloem, structures that distribute nutrients and water throughout the plant. These high plants contain anthocyanins in all parts of the plant: leaves, flowers, fruits, stems, and even roots.

Depending on the genotype of the cannabis plant, these anthocyanins may be expressed in the latter part of the flowering period, irrespective of environmental conditions. They may also express in cold conditions. But if the plant does not produce enough anthocyanins, it might not affect the appearance of the plant at all.

How do anthocyanins affect plant appearance?

Anthocyanins are not produced throughout the lifetime of the plant, and it is only during the last few weeks of flowering that they begin to alter its appearance. The absence of chlorophyll in the final stages allows the pigments to show through even more distinctly.

As the days shorten and hours of darkness increase, photoperiod-dependent plants are given the signal to cease producing chlorophyll (which is essential for photosynthesis and vegetative growth), so that energy can be focused solely on producing flowers and ultimately fruits. As chlorophyll breaks down and dissipates from the structures of the plant, and anthocyanins begin to accumulate, the plant takes on vivid purple, blue and red hues.

Even cannabis plants that contain low levels of anthocyanins often change colour towards the end of the flowering cycle. Most growers will be familiar with the gold, orange and ochre hues that appear in many strains of cannabis in the weeks prior to harvest—and while yellowing in the vegetative period or in early flowering is usually indicative of disease or deficiency, in the latter stages of flowering, it is entirely natural.

In this case the pigments responsible are carotenoids, a group of around 600 molecules that range in appearance from pale yellow to deep orange-red.  As carotenoids are produced throughout the life cycle of the plant, their appearance in the final stages of flowering is a result of chlorophyll production ceasing rather than enhanced production of the pigments.

Cannabis can turn purple due to cold

Certain strains of cannabis contain anthocyanins but are unaltered in appearance unless subjected to prolonged periods of cold temperatures. The mechanism behind this phenomenon is not fully understood, but there is a clear link between cold and enhanced anthocyanin production, as blood oranges also require a cold period to fully acquire their red colouration.

One study shows that a complex set of genetic circumstances lead to this occurrence: a gene known as Ruby, which is common to all citrus varieties but is not expressed in most, is expressed in blood orange due to the presence of a special section of DNA known as a retrotransposon, which is a mobile genetic element capable of being transcribed as part of several essential genes.

Due to the ability of retrotransposons to become inserted into essential genes and thereby cause mutations and potential non-viability, plants have evolved complex mechanisms to ensure that retrotransposons and similar genetic elements remain inactive. However, these mechanisms may be disrupted in times of stress, such as when exposed to periods of cold.

Are anthocyanins useful, or just attractive?

Anthocyanins are known to be powerful antioxidants and are also thought to possess analgesic, anti-inflammatory and neuroprotective properties. Recent research has demonstrated that certain anthocyanins have some selective affinity for the cannabinoid receptors, with some types binding to the CB1 and others to the CB2 receptors.

While studies are ongoing, it’s too early to say conclusively whether anthocyanins deserve the recent media headlines that label purple foods as ‘superfoods’. Previous research has linked anthocyanins to a wide variety of health claims, including increased longevity, cardiovascular health, cancer prevention and dementia.

Consumption of blood oranges too has been variously associated with improved cardiovascular health, and there are indications that they may assist in preventing obesity even in individuals fed a high-fat diet.

Solving the mystery of why cannabis and other plants produce abundant anthocyanin when cold or stressed could have many potential benefits in medicine and research. Furthermore, if anthocyanins are found to genuinely possess the health benefits they appear to have, purple cannabis could find itself elevated far above its current status of simply being aesthetically pleasing. It could easily become a serious candidate for further investigation.

Which cannabis strains are purple?

There are many strains of cannabis that are purple. Our own Purple Bud Feminized is one example. This strain is bred from some of the most renowned gene pools, with her ancestors being directly tied to the famous Hindu Kush region’s Indica cultivars, the Netherlands, and California’s medicinal marijuana movement.

How to make your cannabis purple

While there are strains that are specifically bred to be purple, it is important to keep in mind that the purpling of the plant is a direct result of not only choosing the right strain but also in how the plant is cared for. It is a matter of nature and nurture. Strains have “tendencies” (they tend to be high in anthocyanins), but growing conditions can help to bring out the brightest colours.

To increase purpling in cannabis plants, the night-time temperature should be lowered during the flowering stage. The night temperature should then be below 13° C (55° F). If temperatures are properly maintained, it should start to turn purple a couple of weeks before harvest.