What Is the Science Behind White Ash and Black Ash? 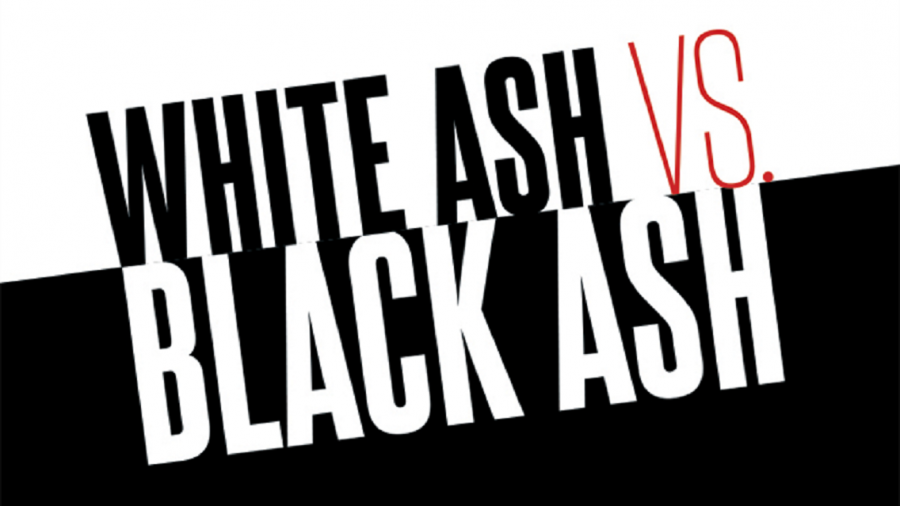 When white smoke appears high up above St. Peter’s Square in Rome, Catholics around the world rejoice. A new pope has been chosen. Habemus papam! We have a pope! No more black smoke, but white smoke and joy.

But the smoke color seen by Catholics is not a direct sign of God. What they are observing is the result of burning paper and straw. The smoke color, either white or black, was controlled originally by burning dry (white) or damp (black) straw. Today additives are used to control the smoke color: Black smoke is achieved by including coal tar and sulfur; white smoke results from added sugar and pine rosin. (And don’t we all like some good rosin.)

Cannabis cultivators and connoisseurs have come to believe that, like the white smoke seen in St. Peter’s Square, white ash left behind in the bowl from smoking cannabis is a cause to celebrate. Black ash, they believe, signifies that the plant was not flushed to remove minerals, nitrates and pesticides. White ash, in contrast, symbolizes properly flushed, dried and cured material.

Cannabis users rejoice when ash is white, but are they worshiping false idols?

What if the color of the ash is not a divine sign but a serendipitous occurrence linked to secular, mundane factors?

Seeing divinity in fire and ash is not new or unique to cannabis consumption. Ash itself is a trinity; it is a complex mixture of charcoal, char and minerals.1 As is often the case, more knowledge and insight mean less mystique. But there are ways in which knowledge gained can open new opportunities. If we used to ask a burning bush for answers about divinity, we now look to a burned bush for answers about forest fires.2 Research into ash from wildfires points to burn temperature as the main factor in determining ash’s properties.3 With increasing combustion temperature, the charred organic material and organic nitrogen concentrations decrease, and the ash color lightens from black to gray to white.4 The lightest color ash is mostly made up of crystalline or amorphous inorganic compounds.5 Further research has yielded additional insight.

At burn temperatures below 450 degrees C, combustion is far from complete, and the ash from low-temperature combustion is rich in organic compounds, with carbon as the main component. The combustion process progresses with increasing temperatures (above 450 degrees C), and carbon becomes volatilized, meaning it turns into a gas. What remains is mineral ash, composed mainly of calcium, magnesium, sodium, potassium, silicon and phosphorous in the form of inorganic carbonates. When the temperatures increase even further (above 580 degrees C), the most common forms of minerals are oxides.6 Another victim of higher combustion temperature is the ash’s total nitrogen content, as nitrogen has a low temperature volatilization.7

Cannabis consumers are not the first to be obsessed with the color of their ashes—the tobacco industry has studied ash color for quite a long time. Already 100 years ago, scientific literature explored the plant ingredients that support or inhibit tobacco burn. It was described that chlorides prevent complete combustion, which then inhibits flavor and aroma. Potassium salts of organic acids, on the other hand, aid in combustion and increase the fire-holding capacity.8

Realizing the importance of potassium salts and other alkali and alkali-earth metal salts, U.S. federal and state agricultural departments, along with academic institutions, began to study the effect of fertilizer use on tobacco smoke and ash.9 Researchers found that fertilizer treatment neither altered the alkali composition of the cured leaves, nor increased the sulfur levels in the leaves. What did make a big difference in tobacco smoke quality was the fermentation process, specifically the high concentration of chlorophyll in low-quality tobacco products.

Early on, white ash in tobacco cigars and cigarettes was accomplished by adding magnesium or calcium acids, nitrates or carbonates. Burning any of these acids in your cigarette will cause alkaline earth metal oxide to form, which imparts a white color to the ash that is left behind.10

The main takeaway is that white ash forms at high combustion temperatures and is mostly made up of minerals. This should lead us to question the doctrine that white ash comes from flushed cannabis plants.

If ash color is not the sign of quality we thought it to be, what are the factors that affect the quality of a plant or plant part after harvest? If we look at relevant industries, such as tobacco or produce, we would think about nutrient content, humidity, temperature, the addition or removal of light, the reduction of the ripening gas, ethylene, and time.

In the general horticulture world, the word “flushing” refers to the act of running a known liquid through a plant’s root ball in order to change pH or media electrical conductivity (EC). To cannabis growers, flushing means something very different: It refers to growers using low-EC water for irrigation during the last few weeks prior to harvest. The thought is this “flushes” out the nutrients from the media which, in turn, flushes them from the plant. The theory is that this ultimately yields a better-smoking flower. We’ve heard explanations supporting this theory that make no sense, such as, “It removes minerals from the plant,” and we’ve heard more plausible theories, such as, “Nutrient deficiency encourages ripening.”

My immediate thoughts go to outdoor cannabis. What about cannabis grown in living soil? Media besides rockwool will never get to an EC low enough to cause true deficiency in a matter of a week or two.

The only scientific paper we’ve seen to date on cannabis and flushing is the thesis “Irrigation Management Strategies for Medical Cannabis in Controlled Environments,” written by Jonathan Stemeroff, while he was pursuing a master’s degree at The University of Guelph. In his thesis, Stemeroff completes a series of experiments testing the nutrient content of dried bud after flushing. He finds that in his numerous flushing experiments, elemental content is not depleted, and yield is not impacted. Basically, unless you are using a rockwool media, you will never lower EC enough to cause true deficiency in a one- to two-week period.

This research does not address the many other things that could be contributing to a better smoke, but it does destroy the theory that flushing removes nutrient elements from a plant. It also encourages the sustainable and cost-effective practice of not applying fertilizer in the last two weeks of growth, as element concentrations were not affected by the low-EC water. Further research should be conducted to complement this study examining the effect of flushing on carbohydrates, chlorophyll, etc.

Other Horticultural Practices for Better Smokability

Another horticultural practice growers perform to improve smokability is turning the growing lights off for a few days before harvest and using no lights during drying. This ritual is supported by numerous studies on various types of live plants and harvested/detached plant parts rapidly decreasing in chlorophyll with the absence of light. It is shown that reducing the amount of light given in the final two days before harvest and during drying slows the degradation of sugars, and decreases starch content.11, 12, 13 Perhaps jump-starting the degradation process before harvest does ultimately increase quality in terms of smokability, which we expect to be represented by a whiter ash color.

Furthermore, another method cultivators perform to increase a product’s smokability is to drop the temperature the last few weeks of the flowering cycle. The temperature drop increases the purple pigmentation to those varieties that have this genetic predisposition. Research has shown that photosystem shutdown causing chlorophyll degradation is increased at low temperatures, even with light. Could dropping the temperature and turning out the lights improve your product’s smokability and smoothness of smoke, and cause a whiter ash? Very possibly, but remember the challenge of removing resulting humidity and the increased risk for botrytis growth at lower temperatures.

So, it appears the manipulation of temperature and light with the goal of chlorophyll degradation and sugar transformation are major contributors to a pleasant smoke and “white” ash, not a good pre-harvest “flush.” This is an example of how easy answers based on poorly informed beliefs likely are not correct. That said, rituals and belief systems that every grower brings into how they grow cannabis might still result in their desired outcome. Just keep in mind that putting a golden calf on top of your stash might mask the underlying scientific reasons for your success, therefore causing you to miss the opportunity to further improve upon your practices.