What Is Cannabis White Ash And How To Get It 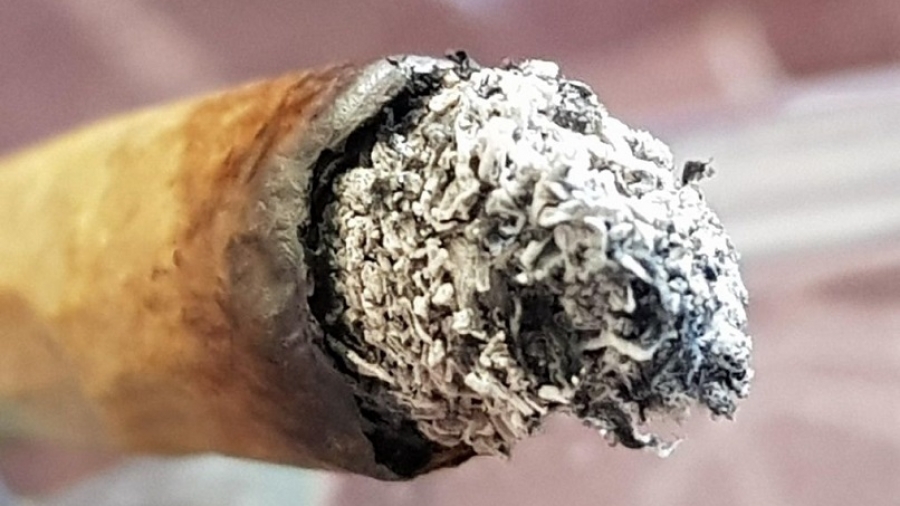 Many claim that white ash is a sign of clean, chemical-free weed. On the other hand, dark ash is frowned upon for the unpleasant smoke it delivers. After much debate and testing, it could be said that the answer lies in the flush and cure. This article discusses white ash and how to get your joints burning smoothly.

What is White Ash?

The definition of white ash is pretty self explanatory, but why is it important? White ash is the result of combusting cannabis buds that supposedly have been properly flushed and cured. In theory, the ash should be on the whiter side if the buds are clean.

It may be that you burnt some weed one day and the ash was dark, hard and crackled big time. The likelihood is that the weed was fed heavy amounts of chemical nutrients and not flushed or cured properly before harvesting. Of course, there are many affecting factors when it comes to determining the quality of your weed, but the colour of the ash can be one of them.

When the ash is dark and hard there could be something wrong with the bud. Growers use all kinds of chemical products to boost their weed. It may increase yields for them, but the final product is less than satisfying and potentially harmful for us.

When weed is very heavily fertilised, or even sprayed with chemicals (weirdly enough, some people do that), the ash will show it. Sometimes the tainted bud is so bad the ash goes solid as well as being on the dark side. Headaches and panic attacks are some of the reported effects of very overfertilized or sprayed buds. Fortunately, if you buy from a reputable source this is never really an issue, but just be careful where you get your weed from.

Growing your own is often the best way to ensure the quality of your weed. If your buds do burn dark, it does not necessarily mean that is a sign of bad quality weed. However, it may mean harvesting was not completed correctly. In most cases the flush and cure do tend to make a positive difference to the final product. Let’s take a look.

The Importance Of Flushing

The topic of flushing has been widely discussed and there are growers who do not believe the process to be an important step in determining the quality of their weed. There are many variables when it comes to flushing and it does not always have to be performed in the same way. The important thing to understand is that flushing is more about cleaning the soil than literally taking out nutrients stored in the buds.

How heavily a grower chooses to flush depends on how the weed was grown. For example, an organic grow using compost and super soils does not benefit from flushing because there are no chemicals used in the growth process. There would probably be quite a difference in the colour of the ash if one was to burn an organic bud next to one that has been fed chemical nutrients until harvest day.

To give you a quick idea, flushing is performed with the intention to flush out any built up minerals, primarily around the root zone. Removing the nutrients from the soil prevents the plant from absorbing more and encourages it to feed off what is left stored in its reserves.

Flushing normally involves giving plants a thorough watering at the beginning of the process to ‘wash’ out excess nutrients from around the roots. This is not entirely necessary but can help to kick start the flushing cycle.

Alternatively, if you don’t feel your plants need a heavy flush, one can simply stick to a watering schedule until harvest. That means just giving plants water as and when they need it. Cannabis plants tend to start drinking less as they mature. It’s a good sign the plant no longer needs further external nutrients.

There are many arguments against flushing and many growers believe it does not make a difference to the colour of the ash. If you’re still unsure whether flushing helps to achieve a whiter ash, why not put it to the test? Grow two of the same strain, one on a light feed and the other on a heavier nutrient schedule. Flush the first plant and not the second. Dry and cure them in the same way and see what the outcome is.

Curing For A Cleaner Smoke

White ash is also considered to be the result of properly cured weed. It is well known in the growing community that drying and curing is crucial to achieve a flavourful, potent product.

When we dry and cure our weed correctly, the remaining sugars continue being metabolised. These compounds break down slowly and are released gradually into the atmosphere. It seems without them, the smoothness of the smoke improves noticeably.

The key here is to not dry and cure your buds too quickly. When this happens, some of the heavier compounds may remain in the bud (such as chlorophyll and other sugars) as they do not have enough time to break down, essentially becoming locked in the bud. Because of this, buds that have been fast-dried may deliver a harsh smoke that has a grassy taste.

The moisture content in the bud could be linked to the colour of the ash. If the buds still hold too much moisture then they may not burn properly (and at a lower temperature) and the ash is likely to be darker unless the weed is heated for a longer period of time.

Drying and curing does help to remove some of the impurities left in the buds, and in theory, results in a whiter ash when burnt. Unfortunately, we still do not know the exact reason for white ash and it is probably a combination of factors, but curing does show significant improvement in bud quality.

The colour of ash may also depend on how the plant material burns. For example, when the material burns at a higher temperature for longer periods of time, the ash tends to be whiter. The drier the material, the hotter it will burn.

Pure white ash essentially means there is no carbon left. Carbon based plant matter burns dark when it combusts (think of charcoal) but if you keep burning it will eventually turn white. The carbon eventually breaks down, leaving just some basic minerals which form a light, white ash.

In the end, there is no concrete evidence to suggest that white ash means the final product is of a higher quality than a bud that produces dark ash. However, it is very common to hear that dark ash is not pleasant. This is why we suggest taking the time to flush and cure your weed, because the difference is more than noticeable.

If you found this article useful or have any comments about white/black ash, please leave a comment down below!