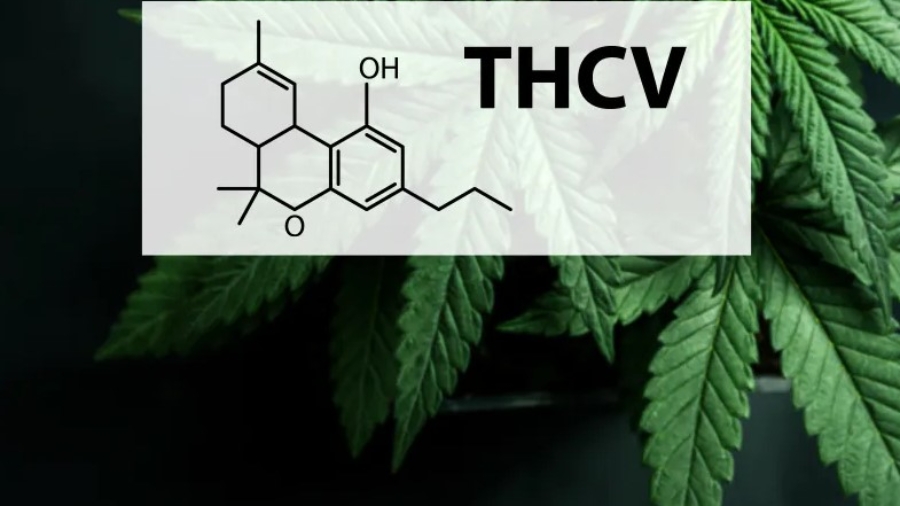 THCV, or tetrahydrocannabivarin, is a compound in cannabis that offers a unique array of effects and medical benefits that sets it apart from other cannabinoids like THC and CBD. Whether you’re a medical marijuana patient looking for a particular type of relief or a casual consumer chasing a specific effect, we’d like to introduce you to this fascinating compound that’s sure to make major waves in the cannabis world as we discover and utilize its full potential.

Tetrahydrocannabivarin, or THCV, is a psychoactive cannabinoid found most prevalently in Sativa strains of cannabis. It is known to produce a more motivated, alert and energizing feeling of euphoria. For this reason, it is often recommended for daytime or any time when functionality is important.

THCV relieves stress and research shows it can help to reduce or even prevent anxiety and panic attacks. For this reason, it plays an important role in the treatment of post-traumatic-stress-disorder (PTSD). It is also neuroprotective, so it is ideal for treating conditions such as Alzheimer’s disease, Parkinson’s disease, and multiple sclerosis. Unlike THC, THCV works to suppress the appetite so it is not recommended for patients suffering from cachexia or anorexia nervosa.

Where Can I Find THCV?

So you’re looking for the effects mentioned above, but you aren’t sure where to start your search for high-THCV strains and products. Most strains only contain trace, undetectable amounts of THCV, making it difficult to achieve the desired therapeutic effect. We can assume that more THCV-rich products will be introduced alongside its growing popularity, but in the meantime, here are some useful hints for locating this rare therapeutic gem.

This list is by no means comprehensive, but it includes strains best known for their tendency toward higher-than-average THCV contents. These strains can be consumed in flower form or they can be processed into extracts, oils, and edibles for a higher concentration of cannabinoids. A few of the strains below, like Doug’s Varin and Pineapple Purps, were specially bred to contain higher levels of THCV. Again, be sure to steer your choices toward African sativas as they tend to contain the most THCV.

Can THCV get you high?

The answer is yes it could, but with an important caveat: THCV is only psychoactive in extremely high doses, similar to CBN. At high doses in potent strains, THCV will produce psychoactive effects that are generally stimulating and promote mental clarity. They are also fast-acting and fast-dissipating (hence the sports-car reference).

What Are The Benefits Of THCV?

One key benefit mentioned above is that THCV acts fast to produce its energizing psychoactive effects. It also dissipates fast, which can be a huge benefit for those who don’t want to experience the effects for long periods of time. In addition to its cognitive effects, THCV also exhibits profound medicinal value in studies to date.

THCV is a well-studied appetite suppressant, which may offer relief for people experiencing obesity. Some research indicates that low doses (5 to 7.5 milligrams) can reduce appetite by inhibiting the action of CB1 receptors. Other research, such as this study by the Journal of Neuropsychopharmacology, suggests that THCV may be an effective weight-loss compound because it improves connectivity in the areas of the brain that are generally altered in people with obesity. This study supported THCV for weight loss but did not support the appetite-suppression theory.

There is also evidence that THCV may help those who suffer from diabetes. In 2013, the Nutrition and Diabetes Journal studied THCV’s potential effects on Type 2 diabetes in mice. The study found that THCV produced an increase in energy expenditure and reduced glucose intolerance in obese mice. THCV also increased insulin sensitivity in the mice with diabetes. The study concluded that THVC may be a “treatment against obesity-associated glucose intolerance.” Another study in 2016 found that THCV improved pancreatic cell function in patients with Type 2 diabetes.

Research indicates that THVC may be a powerful anti-inflammatory agent, which can help stave off a variety of age- and stress-related illnesses. In a study by the Journal of Pharmacology, researchers found that THCV helps reduce swelling in mice. Moreover, the study found that the mice did not exhibit a tolerance to the cannabinoid, despite ingesting it for four consecutive days.

Another animal study in the British Journal of Pharmacology found that THCV, through its interaction with chemical receptors in the body, can decrease signs of inflammation as well as the pain associated with it.

Another benefit that we have research to back is THCV’s ability to suppress tremors associated with illnesses such as ALS, multiple sclerosis, and Parkinson’s disease. Scientific research also supports the fact that THCV can reduce seizures associated with epilepsy. Moreover, research indicates that THVC could reduce not only the frequency but also the severity of seizures when they occur. A study in the Epilepsia journal found that THCV worked when taken during a seizure as well as prior to seizures as a preventive measure.

A Testimonial shared with David Lamach, the maker of Doug’s Varin THC/THCV products, we discuss later in the post.

How Does THCV Work?

At high enough doses, THCV is psychoactive like THC, but most of the similarities end there. One of the most interesting differences between the two is that THCV actually suppresses the appetite at low doses, meaning no munchies like you would get from THC. In fact, studies have shown that THCV can actually counteract some of THC’s effects, which is great news for patients who don’t want to get high.

How does THCV occur?

The chemical structure of THCV is similar to THC, but it’s actually derived from an entirely different precursor. While most cannabinoids, including THC and CBD, are the byproducts of CBGA (cannabigerolic acid) synthesis, THCV is the final byproduct of CBGVA (cannabigerovarin acid). CBGV converts to THCVA, which eventually becomes THCV when exposed to heat or light. THCV is most commonly found in pure sativas originating in Africa, China, Nepal, Pakistan, India, Thailand, and Afghanistan.

How does THCV work in the body?

Like THC, CBD, and other cannabinoids, THCV exerts therapeutic effects through interaction with chemical receptors in nearly every system of the body. The two primary chemical receptors are called CB1 and CB2, which make up what is known as the Endocannabinoid System (ECS). This system is involved in regulating a wide range of our body’s functions required for optimal health.

CB1 receptors are found throughout the body but are concentrated in the brain and nervous system, while CB2 receptors are more prevalent in the immune system. At low doses, THCV acts as an antagonist to CB1 receptors, which means it can block some of the actions caused by THC such as the munchies and intense mental highs.

At higher doses, however, THCV activates both the CB1 and CB2 receptors, and exhibits effects that more closely resemble THC. This results in the enhanced euphoric and cognitive effects along with therapeutic value.

Naturally, THCV is only soluble in oil-based liquids and does not dissolve in water. That said, science has a solution, and it’s called nano emulsions (more on that in our water-soluble cannabinoids blog). Through advanced mechanical processes, THCV can break down into nano particles that effectively dissolve in water.

What is the boiling point?

THCV’s boiling point is a whopping 428 degrees Fahrenheit—a full 114 degrees higher than THC. As a result, you can prepare edibles at a higher temperature, but there is a problem with this technique because a variety of cannabinoids and terpenes begin to vaporize above 245 degrees Fahrenheit (meaning you lose out on flavor and effects). On the plus side, it makes things easier if you want nothing but THCV in your edible.

What type of THCV products are available?

THCV can be found in full-spectrum hemp and cannabis products, including oils, waxes, and edibles. THCV can also be found in extracts and isolates, and distillates.

One example is the Doug’s Varin vape line, launched earlier this year by California Cannabinoids. One of Doug’s Varin vapes is THCV-only, and the other combines THCV with CBD on a 1-to-1 ratio. Both products contain between 25% and 35% THCV and last about half as long as a THC high. David Lampach, CEO of California Cannabinoids, indicated that he acted on “strong consumer” demand for THCV when he helped formulate these products.

What are some other high-THCV products?

Are there other high-THCV strains?

Yes! Although, “high” is a relevant term. Significant levels of THCV are certainly less common than CBD and THC, but in some cases, THCV content may even be higher than THC. Overall, the most common strains with the highest THCV levels are of African and Asian descent, according to the American Journal of Botany.

Other THCV strains include:

How do I extract THCV?

While THCV is much more expensive to extract due to lower levels of it found in plant biomass, the process is largely the same. Like other cannabinoids, THCV is extracted through a chromatography process that uses superfluid liquid solvents such as CO2 or ethanol to separate the compounds from the plant. The solution is then evaporated with heat under a vacuum to remove all the gas and leave a high-purity THCV concentrate behind. Once extracted, THCV products should be stored at room temperature and away from direct sunlight to preserve potency.

How is THCV’s potency measured?

THCV is measured through potency tests in the same way potency is tested in CBD, THC, and other cannabinoids are detected. ACS Laboratory uses LCUV, High Performance Liquid Chromatography with UV detection to ensure that all testing is accurate and consistent.

Why Does THCV Matter?

The word is getting out about this energy-boosting, weight-loss-stimulating, anti-inflammatory powerhouse, and THCV promises to be one of the cannabis industry’s next big ingredients. Currently, there are few strains in the market that produce significant levels of THCV, so there’s a market gap and an opportunity, according to market-research firm Benzinga, to be one of the first companies to market high-THCV strains or extracts.

THCV is a product that invites people of all kinds to give it a try, especially those who have never tried cannabis because they fear the high and the munchies characterized by THC. Unlike its intoxicating cousin, low levels of THCV provide high energy, mental clarity, and appetite-suppressant qualities that may even entice the Type A’s among us. Its ability to draw in a wider crowd of customers is a huge benefit.