The THCV Strains You Should Know About 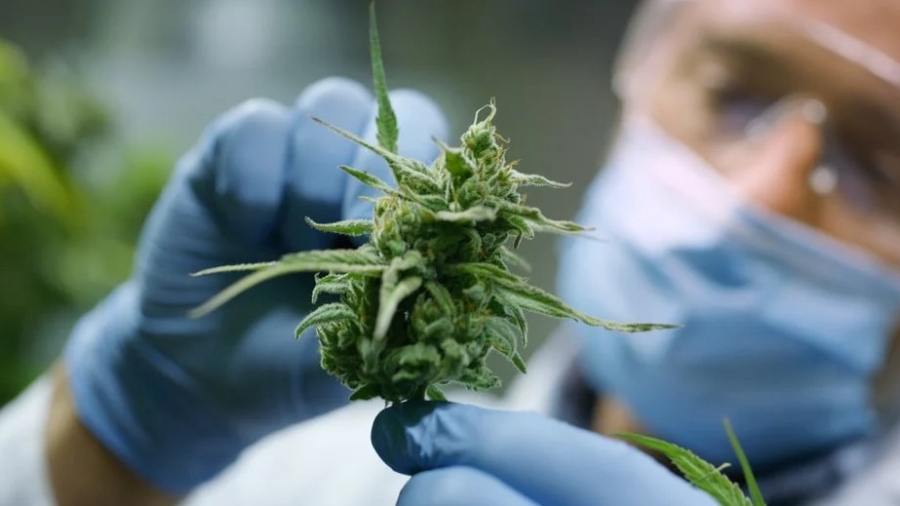 THCV is a minor cannabinoid usually found in trace amounts in most cannabis strains, or “cultivars.” But its slim profile hasn’t prevented THCV from gaining the attention of researchers and recently, a foothold in the health and wellness segment of the cannabis market.

If you’re curious about tetrahydrocannabivarin (THCV), a minor cannabinoid gaining lots of attention for its various effects and potential medical value, you’re no doubt wondering which cannabis strains have high levels of THCV. This particular cannabinoid is most prominent in strains native to Asia and Africa, but with the increasing interest in the compound, more strains are being cultivated specifically for their higher-than-average THCV content. To give you an idea of which marijuana varieties produce this unique compound, here we highlight a few cannabis strains that have high levels of THCV; try to try them all!

The trademark strain Doug’s Varin is a rare sativa that was bred specifically to produce high levels of THCV. With sweet, earthy aromas of citrus and pine, Doug’s Varin offers a clear-headed, energetic experience as well as relief from anxiety and tremors, among other effects.

Tangie is a sativa hybrid bred from a Skunk phenotype and California Orange that offers an uplifting, relaxing experience for both body and mind. The distinct aroma and flavor of sweet tangerines and oranges set Tangie apart even from many other “citrus” strains, and it produces significant amounts of THCV.

Bred to have a high THCV content, Pineapple Purps is a rare, sativa-dominant variety that has the distinct flavor of sweet pineapple.

Durban Poison originates from the port city of Durban, South Africa and was first imported to the U.S. in the late 1970s by one of America’s first international strain hunters, Ed Rosenthal. This award-winning medical sativa has been at the center of the newfound interest in high-THCV strains. With a naturally occurring THCV concentration of nearly 1%, Durban Poison excels at suppressing appetite while inducing energizing and focusing effects of a pure sativa.

The high THCV content is just another reason to love the widely popular Girl Scout Cookies, a pungent hybrid that tastes sweet as sugar. Girl Scout Cookies offers a relaxing effect over body and mind, as well as relief from appetite loss, pain, and anxiety.

The big, resinous flowers of Dutch Treat offers sweet, earthy flavors of fruit, eucalyptus, and pine, as well as high concentrations of THCV. Dutch Treat is known for quickly relieving stress and instilling a feeling of euphoria on the mind.

Sativa strains that originate from the African continent have the highest amounts of THCV. It is not clear why this is the case.  Other strains, especially indicas, will have minimal amounts of THCV. If you are looking to try out a marijuana strain with appetite suppressing effects, you can try any of the strains listed below for the best effects:

Dougs Varin is the most popular marijuana strain as far as THCV goes. It is currently cultivated for its high THCV content. It has an earthy pine aroma that is mixed with citrusy notes. It causes clear headed mental stimulation that doesn’t last for long. It also suppresses the appetite and may promote weight loss.

Pineapple Purps is a sativa leaning hybrid strain that is also referred to as Purple Pineapple. It is a sweet smelling marijuana strain that is packed with high amounts of THCV and moderate THC amounts.  The exact parentage is unknown, though some sources claim that it originates from Pineapple Express or a Cheese strain.

This is a sativa landrace strain that hails from the African continent- Malawi. It causes an energetic buzz that is mentally stimulating and uplifting. It is loaded with THCV and can be used to suppress appetite as well as facilitate weight loss.

This is a rare landrace sativa strain that traces its origin to the Nguni people of East Africa. It is a highly resistant strain that does well in spite of fluctuating weather conditions. It produces a sweet and citrusy flavor and its effects are fast-acting. It’s a great strain for relaxation and unwinding after a long and tiring day.

Power Plant is a powerful sativa strain from Dutch Passion Seed Company. It has high THC that ranges between 15%-20% and an equally high THCV amount. It’s been around since the 1990’s and has won several cannabis awards.

Willie Nelson is a marijuana strain that is named after the infamous country musician “Willie James.” In 2005, this strain won the cannabis cup for being the best sativa strain. It has a mix of sweet and sour tastes with a lemon grass appeal. It is a hybrid cross between Nepalese and a sativa South Asian strain. It causes a clear-headed high when taken in high amounts. It is a great choice for reducing appetite due to its high THCV amounts.

There is a bit of controversy surrounding the origins of this strain. While some argue that it is an Africa Sativa strain, others argue that it has its roots in Mexico. The Red Congolese is a colorful marijuana strain that induces mental clarity and mild stimulation. It is a perfect strain for combating stress, mind fog, anxiety and obesity.

Jack the Ripper’s storied lineage is one breeders and growers love to recount, but producing a strain rich in THCV wasn’t the goal Subcool The Dank (formerly TGA Subcool) had in mind when the idea occurred to cross a Jack Cleaner female with a Space Queen male. Instead, the plan was to breed a fast-acting Haze strain with extreme THC content. But the results speak for themselves: Jack the Ripper consistently weighs in at 5% THCV or higher, with THC content that ranges from around 15-25%.

Unlike other high-THCV strains, which tend to be pure sativas, Pink Boost Goddess is an indica-dominant hybrid with a vanilla flavor and an intense floral terpene aroma.

Skunk #1 is another award winning strain from the Skunk family.  It was originally bred by Sacred Seed Co. as a cross between Afghani landrace, Colombian Gold, and Acapulco Gold.  It has the typical skunky marijuana smell and causes a high energy buzz. It has high amounts of THCV.

While THCV is not specifically listed as a scheduled drug, it is closely related to THC and falls in the category of “Marijuana extracts” which are currently outlawed under federal law. Consequently, THCV is illegal in all the states where THC is considered illegal for human consumption, possession, or sale.

The top 10 THCV strains are currently a hit as science begins to catch up on the potential benefits of this new cannabinoid; it would be helpful to lay your hands on a few THCV-potent strains before they get all-too-scarce.

Specific Benefits and Effects of THCV

You can expect a variety of effects from THCV on your body. Especially in regard to certain medical conditions, there’s much to recommend this cannabinoid.

Anxiety and other mental disorders are directly treated with THCV. Scientifically, a big reason these things happen can be explained by how CB1 and CB2 receptors interact with the compound. As the body interacts with THCV molecules, specific positive effects like the following can be expected:

What to Take Away

In a nutshell, THCV acts as a natural supplement that impacts the body’s natural cannabinoid receptors, pushing them to act in ways that are different from their natural function. Accordingly, a high degree of potential defines this compound as pertains to medicinal applications where pharmaceuticals do the same job poorly, or with more adverse side effects. THCV strains are better than drugs, and as inverse agonists, these strains are jewels in the MMJ crown; functioning as some of the most useful cannabinoids derived from marijuana. There are many health benefits that accompany THCV.

For this and other reasons, you can expect the attention of THCV to expand. Researchers, growers, and medical professionals have recognized THCV as an exceptionally worthwhile cannabinoid. Energy, a balanced high, and therapy to a broad spectrum of diseases represent just a few of the reasons THCV has this reputation. The cannabinoid plays to the strengths of the user without diminishing their abilities. Though the majority of strains incorporating THCV are minimal at present, many who cultivate and research cannabis have expanded their awareness of this cannabinoid, and you can expect it to be more prevalent in the near future as new means of expanding THCV content are discovered.

At MMJ Doctor, our experienced doctors and healthcare providers are dedicated to restoring patient’s physical and mental health.

Get in touch with us to avail your MMJ Card and buy Medical Cannabis easily from any MMJ dispensary.