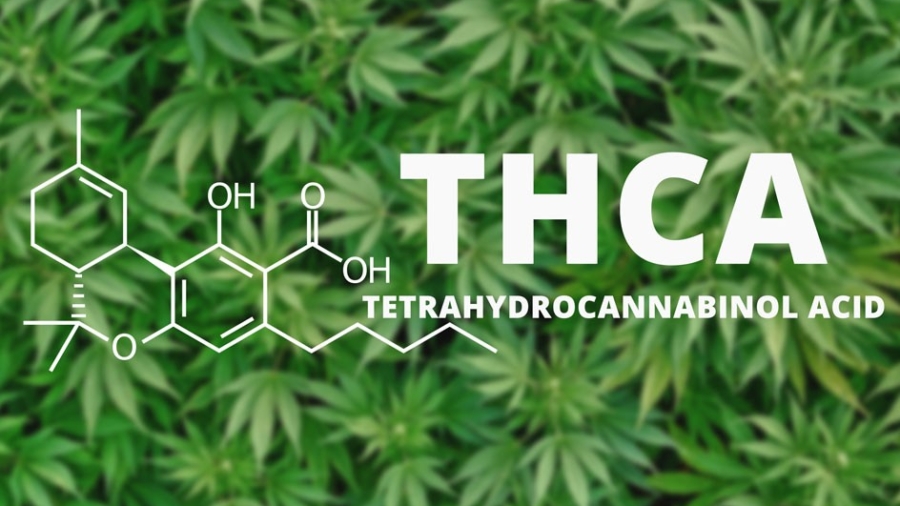 THCA, or tetrahydrocannabinolic acid, is a cannabis compound that is beginning to demonstrate therapeutic potential despite the infancy of its research. You’ve heard of THC, and while they may sound similar, THCA has very different properties. Unlike THC, THCA is a non-intoxicating cannabinoid found in raw and live cannabis. As the plant dries, THCA slowly converts to THC. Heat expedites this conversion in a process known as decarboxylation, a fancy word that describes what happens when you smoke or vaporize flower.

There are 113 identified cannabinoids in the marijuana plant. Researchers also say there are hundreds of other compounds, including terpenes and flavonoids. However, the prohibited status of cannabis means research into its properties is limited. We are aware of THC and CBD primarily because they are generally the two most abundant cannabinoids.

It is easy to assume that these are two of the few cannabinoids with potential benefits. In reality, however, the little research that has occurred regarding other compounds paints a different picture.

It seems that the compounds in cannabis and hemp work better together than in isolation. This phenomenon is called the ‘entourage effect.’

One cannabinoid that is beginning to garner attention is THCA. In this guide, we look into it and also determine how it differs from THC.

Those with any knowledge of cannabis are likely aware of THC. It is the molecule known to produce the famous intoxicating high that so many people love. Modern-day breeders deliberately grow plants with as high a THC content as possible. What many people don’t realize is that the compound is only available in minuscule amounts in raw marijuana.

You can decarboxylate weed it by exposing it to heat. The process of vaporizing or smoking cannabis performs this task automatically. You can also ‘decarb’ by drying and curing the buds. However, this process takes a relatively long time.

THCA is the “precursor” acid to THC. While THC and THCA are nearly identical in terms of chemical structure, they have a few molecular differences. These account for radical changes in the way they affect the brain.

Namely, THCA does not produce any psychoactive, mind-altering effects. This is why you could hypothetically eat a bunch of raw marijuana buds, and hardly get high at all.

Yet THCA is far from inactive regarding the effect that it has on humans. Instead of producing an intoxicating high, for instance, it potentially possesses dozens of therapeutic health benefits. These include analgesic (pain-relieving), anti-inflammatory, and neuroprotective properties.

Like every other cannabinoid, THCA comes from CBGA. As plants mature, their enzymes convert the CBGA into one of three cannabinoid precursor cannabinoids: THCA, CBDA, and CBCA.

THC and THCA are similar molecules. However, THCA’s 3D shape means it is too large to fit into the cannabinoid receptors, particularly CB1 receptors. The reason why THC causes intoxication is that it fits into your body’s CB1 receptors.

When THCA gets heated to extreme temperatures (i.e., when you smoke or vaporize it), it becomes THC. It produces a high at this stage.

What Properties Does THCA Possess?

First of all, it is necessary to issue a disclaimer of sorts. There isn’t enough research into THCA to confidently state what it is capable of. That said, the studies which have looked into the cannabinoid provide positive outcomes in general. One suggestion is that THCA stimulates the appetite like THC. It acts as a cannabinoid receptor in itself and has potential neuroprotective benefits.

Here is a more detailed list of the possible properties associated with THCA. Bear in mind, that we need significantly more research:

There are a few research papers on THCA’s possible benefits. A study by Ruhaak et al., published in Biological & Pharmaceutical Bulletin in 2011, investigated six cannabinoids. The researchers wanted to evaluate the cyclooxygenase inhibiting effects of these cannabinoids. They found that THCA demonstrated anti-inflammatory properties.

A study by Moldzio et al., published in Phytomedicine in June 2012, looked at THC and THCA. According to the research, THCA could protect against neurodegenerative diseases.

Rock et al. published a study in the British Journal of Pharmacology in July 2013. Researchers found that THCA and CBDA were effective in the reduction of vomiting and nausea. Indeed, their efficacy exceeded that of THC and CBD. The study was on rodents, but it was promising nonetheless.

As you can see by the dates of these studies, however, there is little in the way of recent research. Scientists have a hard enough time trying to get funding for THC and CBD experiments!

What are THCA’s Effects and Benefits?

There isn’t enough research on THCA to definitively state what it can treat and with what degree of efficacy, but preliminary research and anecdotal evidence suggest that THCA will play a pivotal role in cannabis medicine as the industry propels forward. Here are some of the potential benefits studies have started to unveil:

Other possible medicinal avenues supported by patient stories include insomnia, muscle spasms, and pain. Unfortunately, we’ll have to wait for more studies to substantiate all of the above benefits before we can fully understand what THCA means for the future of cannabinoid-based medicines.

How To Use THCA?

How do you use THCA and take advantage of its medical capabilities, without smoking it and turning it into THC? One method is by trimming raw cannabis buds and ‘juicing’ the plant matter. We have a tremendous raw cannabis recipe smoothie recipe on this very site. It is a quick and easy way to make the most out of THCA.

Another option is to steep it in hot water and call it THCA Tea. This process exposes the compound to a relatively low temperature, which means it doesn’t turn into THC. Other options include using it as a garnish or creating salad dressings.

Please note that you must not expose the cannabis to a temperature of above 250 degrees Fahrenheit. If you do, you will ensure it breaks down into THC.

Dr. William Courtney of the Cannabis International group has an interesting theory. He believes raw cannabis offers 1,000 times the amount of therapeutic cannabinoid acids (i.e., THCA) than its smoked or vaporized counterpart.

Incidentally, CBD has many of the same properties as THC oil, according to research. It is also non-intoxicating. Check out this article on CBD hemp oil. Proponents claim it can help improve sleep, reduce pain, and alleviate anxiety.

Can You Smoke THCA?

As THCA breaks down into THC when exposed to heat, the answer is a definite ‘no.’ Best estimates suggest that exposing THCA to 212 degrees Fahrenheit for four hours would cause it to convert into THC completely. If you smoke or vaporize raw cannabis, you will lose the THCA.

You now understand that THCA becomes THC when smoked or vaporized. You are also aware the process happens more slowly when the herb is dried and cured. However, there are many other ways for the decarboxylation process to take place:

Have you ever noticed your dispensary label the amount of THCA in a strain instead of THC? As such, you must account for it when calculating a strain’s potency.

One of the most popular techniques for measuring potency in weed is gas chromatography. This method involves applying heat to the plant matter you test. This process decarbs cannabis and converts its THCA into THC. The potency is measured in percentage terms, which gives us a neat and tidy figure. At least, that’s the theory.

In practice, the heating and decarbing processes result in the weed losing a significant amount of weight. This is because the THCA molecules lose lots of their carbonyl groups. As a result, interested parties can use the following formula to try and get an accurate THC level:

For some, the formula above provides them with a ‘maximum’ THC level. However, when you smoke marijuana, not all of the THCA converts into THC. It is overly simplistic to suggest that 30% THCA means 30% THC. In reality, anywhere from 30% to 70% of THCA in any given strain isn’t converted into THC when you smoke it.

Ultimately, the cannabis you consume contains significant amounts of THCA when it is raw. Once you decarboxylate it, this compound is converted into THC, the cannabinoid that provides an intoxicating high. There isn’t a massive difference between the two in molecular terms. However, they produce substantially different effects on the human body and brain. THCA does not cause intoxication.

Even so, proponents of raw marijuana claim it has a myriad of health benefits. Whether you want to explore this form of weed is another matter. Just note that exposure to significant levels of heat will ensure the THCA is ‘replaced’ by THC. You can try THCA by creating a raw weed smoothie, or by treating it as a leafy green!