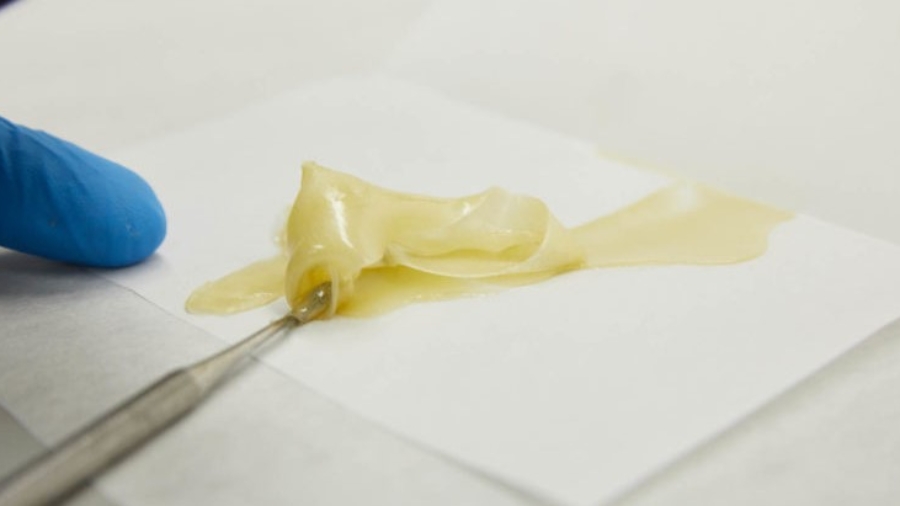 Rosin is a cannabis concentrate made through an extraction technique that manipulates fine hash using pressure and heat. Having a very high cannabinoid and terpene concentration, rosin is further differentiated from other concentrate products because of several important factors.

Rosin refers to an extraction process that utilizes a combination of heat and pressure to nearly instantaneously squeeze resinous sap from your initial starting material. The term “rosin” originated as a method of making a product used to create friction with violin bows.

The first is overall purity, the result of using only heat, pressure and sift bags with microscopic openings—as opposed to any solvents—to separate cannabinoids and terpenes from the plant. As such, rosin won’t have any solvent residue, while other techniques may require going through more steps to purify the concentrate, something that is not always fully achieved.

What is rosin made of?

This cannabis product is extremely versatile, as rosin is made of marijuana flower, hash, or kief and transformed into a full-melt hash oil. The result is a translucent, sappy, and sometimes shatter-like product that can be consumed as rosin dabs. If executed correctly, rosin can rival the flavor, potency, and yield of other solvent-based extraction products.

Also known as whole-plant extracts, full-spectrum extracts are known by that name because they retain the cannabis plant’s full profile and typically contain a variety of cannabinoids, terpenes, and other compounds. They’re quite difficult to produce because many extraction methods filter out some components during their refinement process.

Depending on how it’s extracted, rosin (especially flower rosin) can be considered full-spectrum. Hash rosin, however, is more commonly a select-spectrum extract.

What is rosin? Exploring the purest cannabis concentrate

With numerous businesses entering the newly created concentrates market, one can reasonably expect, or at least hope, that the demand and quality of these products will continue to rise.

Wondering about rosin? With numerous businesses entering the newly created concentrates market, one can reasonably expect, or at least hope, that the demand and quality of these products will continue to rise.

This will likely be a positive thing for cannabis customers since these products are suited for medical and recreational users, and they offer high levels of both cannabinoids and terpenes.

What is rosin? Exploring the purest cannabis concentrate

Rosin is a cannabis concentrate made through an extraction technique that manipulates fine hash using pressure and heat. Having a very high cannabinoid and terpene concentration, rosin is further differentiated from other concentrate products because of several important factors. The first is overall purity, the result of using only heat, pressure and sift bags with microscopic openings—as opposed to any solvents—to separate cannabinoids and terpenes from the plant. As such, rosin won’t have any solvent residue, while other techniques may require going through more steps to purify the concentrate, something that is not always fully achieved.

With numerous businesses entering the newly created concentrates market, one can reasonably expect, or at least hope, that the demand and quality of these products will continue to rise. Photo by iStock / Getty Images Plus

Other positive rosin attributes include the price of production and the possibility of manipulating the concentrate into different textures and consistencies, including shatter, wax and crumble.

What is the potency of rosin?

Reaching the highest potency of any concentrate depends on the starting material used. Also critically important is the quality of the sifts used in the extraction process, because this also determines the concentration of the rosin.

Usually, the cannabinoid concentration is around 70 percent, and can even reach more than 80 percent. It should be noted that an estimated 10 percent of rosin could be various terpenes that were present in the strain used to create the rosin.

Terpenes may also play a key role in the feeling delivered via the fragrance and flavour of the rosin, but also perhaps related to medicinal effects since, when combined with cannabinoids, they contribute to the entourage effect.

How to make rosin

Unlike the methods of extraction relying on using combustible and potentially dangerous solvents (butane, as in butane hash oil, or propane), professional rosin creation involves only a machine press that heats the hash to a moderate temperature. This helps diminish the potential for mishap or injury.

Taking into account both safety and the reasonable price of producing rosin compared to other concentrates, an argument can certainly be made that pressing rosin is an excellent extraction method option. There are two different methods to rosin: the first DIY method is relatively inexpensive; the second, more professional approach comes with higher costs.

Let’s focus on the second method. This will require purchasing a press designed exclusively for making resin, ranging from hundreds of dollars (likely for those relying on manual pressure) to thousands of dollars. Expensive, but nowhere near the cost of a closed-loop extraction systems used for solvent-based extractions.

First, turn the sift filter micron bags—which come in different versions and help determine the rosin’s purity—inside out. Two identical bags, which will go one over the other, will be needed, and ensure the bags do not contain any contaminants, such as hairs or anything else.

Use a funnel to pour the hash into the first micron bag—for best results, create the hash using the dry-sifting method—employ a fine-mesh screen to manually separate the cannabis plant’s finer and small parts that contain cannabinoids and trichomes from the rest of the plant material. The resulting product will have a grainy and coarse texture. The material should then be sieved in a cold room or freezer. If looking to store the dry-sifted hash before consuming it, use the exact same technique as storing the newly created rosin for longer periods of time.

How is rosin different from resin? Broadly speaking, resin refers to a viscous substance derived from plants. Live resin can be made from cannabis concentrate by taking fresh cannabis and freezing it to subcritical temperatures both before and during the extraction process. This allows the live resin to retain the plant’s terpene profile, whereas with rosin, certain extraction processes may result in a loss of some terpenes.

Why is rosin so popular?

One reason for rosin’s newfound popularity is that it’s a solventless technique, meaning the process does not require use of any foreign substances. Instead, rosin uses a mechanical process involving heat and pressure to extract the resin from the plant. Other extraction methods utilize light hydrocarbons such as butane and/or propane. Often, these complex and mechanical systems require a lengthy purge to safely remove most, if not all of the residual solvents from the final product.

Rosin, on the other hand, simply uses heat and pressure and does not require any additional cleaning, so your final product is clean and ready in just minutes. When compared to BHO (butane hash oil), the two are aesthetically indistinguishable. Rosin, when made properly, retains just as many valuable terpenes that account for aroma and flavor. However, in a lab test, rosin will never contain a single parts per million (PPM) of residual hydrocarbon. In other words, you are essentially getting shatter without any solvents when using this process.

Perhaps the most important reason why rosin has been so widely adopted is the sheer simplicity of this technology, allowing enthusiasts with no background in chemistry or botanical extractions to try it out for themselves with minimal risk. You can make rosin at home with just a few household items—check out our step-by-step guide on how to make rosin dabs.

Compared to the days it takes to safely make BHO products, you can see why rosin is a popular trend in cannabis culture. Never before has there been an arguably more versatile, efficient, and safer method of achieving a high-grade solventless hash oil than rosin. Innovators are already creating industrial-sized presses that are capable of processing large amounts of hash oil within seconds. These machines scale up to multiple tons of pressure to extract at extremely low temperatures, thus preserving valuable terpenes.

Many dispensaries are now utilizing this technology and stocking their shelves with rosin. Today you can find it in almost every legal market. The horizon is bright for rosin, and this product will surely continue to make waves in the cannabis industry.

The Future of Rosin

The future of rosin appears bright and shows no signs of slowing. The potential health benefits of rosin make it a prime product for the health conscious. Meanwhile, its ease of use and minimal safety risk make it the sensible choice for small yields and at-home productions.

The next step for SHO is a legalized world is to tap into marketing. If buyers get educated to rosin, as it has been the case in the past few years, more will come over to its side. With equal potency at a much lower cost, the move only makes sense.

As the cannabis industry moves forward, rosin seems to be the horse it saddles up to. Its clear advantages for both home and business use makes it the prime option for virtually every customer in the space.

Gauging the next wave of the cannabis market is a risky move. That’s why the majority of businesses are penny stocks at the moment. However, if you wanted to make one bet, make it rosin. It’s sure to be part of the industry’s future for some time to come.