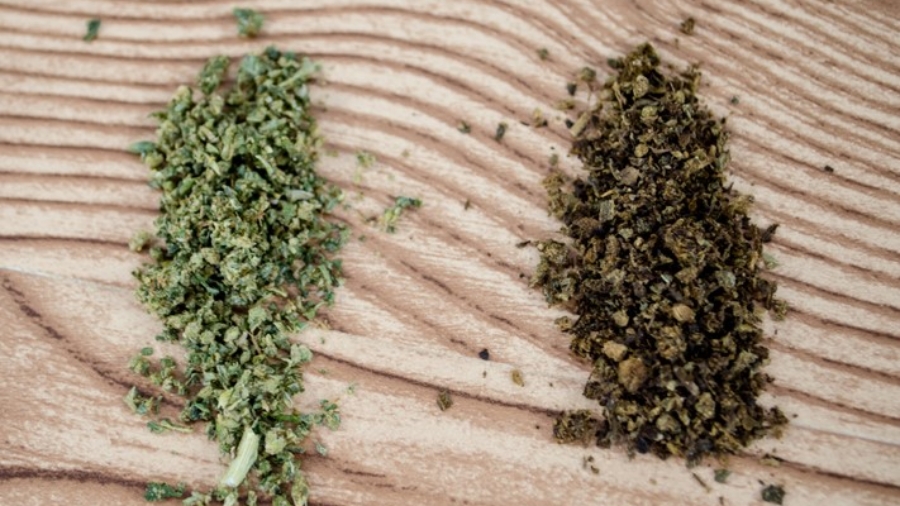 Decarboxylation is the process that activates compounds in cannabis such as THC. All cannabinoids contained within the trichomes of raw cannabis flowers have an extra carboxyl ring or group (COOH) attached to their chain. For example, tetrahydrocannabinolic acid (THCA) is synthesized in prevalence within the trichome heads of freshly harvested cannabis flowers. In most regulated markets, cannabis distributed in dispensaries contains labels detailing the product’s cannabinoid contents. THCA, in many cases, prevails as the highest cannabinoid present i items that have not been decarboxylated (e.g., cannabis flowers and concentrates).

THCA has a number of known benefits when consumed, including having anti-inflammatory and neuroprotective qualities. But THCA is not intoxicating, and must be converted into THC through decarboxylation before any effects can be feltDecarboxylation is easy enough to do at home using tools you likely already have in the kitchen. Beyond the basic oven method, here you’ll also find instructions for decarbing in a mason jar and by sous vide, which are excellent alternatives for those concerned about the pungent scent of cannabis cooking.

The two main catalysts for decarboxylation to occur are heat and time. Drying and curing cannabis over time will cause a partial decarboxylation to occur. This is why some cannabis flowers also test for a presence of small amounts of THC along with THCA. Smoking and vaporizing will instantaneously decarboxylate cannabinoids due to the extremely high temperatures present, making them instantly available for absorption through inhalation.

The THCA in cannabis begins to decarboxylate at approximately 220 degrees Fahrenheit after around 30-45 minutes of exposure. Full decarboxylation may require more time to occur. Many people choose to decarboxylate their cannabis at slightly lower temperatures for a much longer period of time in attempts to preserve terpenes. Many mono and sesquiterpenes are volatile and will evaporate at higher temperatures, leaving potentially undesirable flavors and aromas behind. The integrity of both cannabinoids and terpenoids are compromised by using temperatures that exceed 300 degrees F, which is why temperatures in the 200’s are recommended.

Heat and time can also cause other forms of cannabinoid degradation to occur. For example, CBN (cannabinol) is formed through the degradation and oxidization of THC, a process that can occur alongside decarboxylation. CBN accounts for a much more sedative and less directly psychoactive experience.

Cannabis can also be decarboxylated in a slow cooker by introducing solvents such as cooking oils or lecithin. These methods create infusions that can be used in a variety of cooking recipes, topicals, and even cannabis capsules. Since they contain decarboxylated cannabinoids, they will be effective any way you choose to consume them.

Decarboxylation is the magic that makes cannabis a potent additive to food.

Simply put, it’s a chemical reaction that is achieved through heating up raw cannabis to a temperature at which it releases a carboxyl group and becomes psychoactive.

THCA (Tetrahydrocannabinolic acid) is the active component in raw cannabis, and it’s not a psychoactive compound by default.

Through decarboxylation, we’re essentially applying heat to plant material so that the THCA gets converted to THC, enabling us to get high.

Cannabinoids in raw cannabis have an extra carboxyl ring in their molecular structure.

For the purposes of this article, we’ll focus on the two most prevalent: THC and CBD.

This extra carboxyl group gets removed in the process of decarboxylation due to the effect heat has on their chemical structure.

Once enough heat has been applied, the molecule will release a carboxyl group. That carboxyl group then gets replaced with a hydrogen molecule.

This process is pretty much the same for CBD. Both CBD and THC acids are carboxylic acids which tend to decompose directly when heated.

Only complex carboxylic acids decompose under the influence of heat alone.

As with any other chemical process, there are certain things that need to happen in order for chemical compounds to change their structure.

Decarbing is a process that involves both temperature and time, so it’s all about balancing the two.

Luckily for us, there is a chart for that.

This is called a decarboxylation chart and it allows you to see how you can reach the desired THC by baking the buds on a specific temperature for a set period of time.

How to decarb weed (in 6 steps)

So far, we’ve learned that decarboxylating cannabis is a needed step in making super-potent edibles and that cannabis can be decarbed in several ways, depending on the temperature and the time you bake it at.

We also found out that the easiest way to decarboxylate cannabis is to bake it at a relatively low temperature for about 30 minutes.

How to decarb in a mason jar

If this sounds complicated, you can always get a Magical Butter machine or the Nova Decarboxylator and skip all of the steps above, as the machine does everything for you in under an hour.

Just as you need to decarb your high-THC weed to feel its effects, you’ll also benefit from doing so with your CBD flowers. During the decarboxylation process, CBDA converts to CBD. Although CBDA displays some interesting effects, CBD offers much more well-understood benefits. Before crafting edibles, tinctures, or oils using your CBD buds, make sure you decarb them for the best outcomes.

Decarboxylation Temperature for THC and CBD

Decarboxylation temperatures are largely the same for most major cannabinoids. As mentioned, a temperature of 110°C, sustained for 30–45 minutes, gets the job done.

Many cannabis smokers confuse decarboxylation with vaporization (boiling point). Although decarboxylation naturally occurs when vaping, the boiling point of various cannabinoids, terpenes, and flavonoids can differ dramatically depending on the volatility of the phytochemical in question.

Check out the recommended temperature settings below when you feel like vaping your cannabis.

Cannabinoids vaporize at different temperatures, which means vapes with precise settings can target specific cannabinoids. Alter the temperature depending on what kind of strain you’re smoking—you’ll find different settings work better for high-THC vs high-CBD buds.

Terpenes underpin the delicious and unique flavours of each cannabis strain. Plus, these molecules synergise with cannabinoids to amplify their effects.

Flavonoids also complement the complex phytochemistry of cannabis. These molecules are associated with antioxidant effects, among others. Some of them occur all throughout the plant kingdom, whereas others are unique to cannabis.

To ensure maximum potency, we recommend using the same procedure detailed above to decarb your cannabis buds/kief before making these products.

Now, once your cannabis has cooled down sufficiently, you can put it in a food processor and pulse until it’s thoroughly ground (like oregano).

If you’re going to use your decarbed weed in smoothies or drinks, you should continue grinding until you turn it into powder. For food, there is no need to do this.