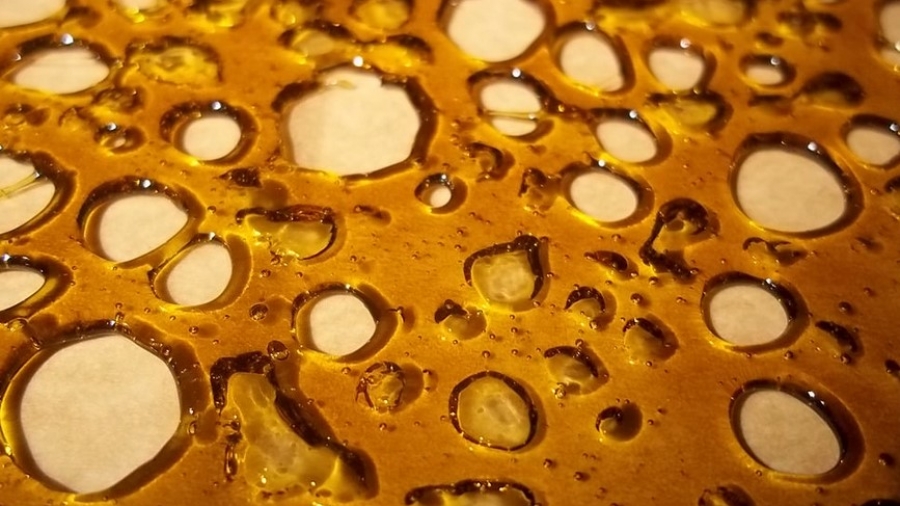 Any lover of dabbing cannabis extracts and concentrates has seen, every now and then, some yellowish/brownish residue stuck to the internal parts of his water pipe or bubbler. This residue is basically composed of resin, which gets stuck to the glass due to the recondensation of the vapour.

This residue is often called reclaim, and while its appearance may not seem as eye-catching as the “raw” concentrate, it still contains large amounts of cannabinoids that can be used.

Be careful though, for reclaim must not be confused with the resin stuck to the pipes from the combustion of dried flowers, which does not contain much cannabinoids due to the high temperatures reached during combustion. We’re exclusively talking about the resin accumulated in rigs and dropdowns when dabbing extracts.

According to the cannabinoid tests made by Scott Churchill – Director of Methodology at MCR Labs – reclaim does contain large amounts of cannabinoids. Several types of reclaim were analyzed in these tests, with diverse texture, consistency, colour and collecting methods.

Indeed, all samples tested showed high cannabinoid content, ranging from 30 to 60% THC. It is then obvious that recovering this resin is worthwile, especially for enthusiasts of BHO in times of shortage.

How to collect reclaim?

There is a very useful accessory for collecting reclaim called drop down, with which vapour is condensed and concentrated. Reclaim is mainly found at the base of the drop down, right below the nail. In this way, you can keep your bubbler clean longer.

To collect reclaim from a drop down, simply heat the accessory with a flame torch and leave it on a silicone pad, reclaim will slowly drip on it. It is important not to overheat the resin, otherwise it’ll lose most of its properties.

If you don’t have a drop down but want to collect the reclaim in your bubbler, you can dilute it with some ethanol. If that’s the case, remember that you must purge your reclaim as you’d normally do with other resin extracts made with alcohol.

To assuage your fears, we’ll start out by saying that yes, there is actual science behind this. MCR Labs in Massachusetts decided to answer the question on many dabbers’ minds: what the heck is in this stuff?

They tested four samples of reclaim, all with different physical characteristics, using the same ultraviolet technology they do when testing regular cannabis and concentrates. This method is called high-performance liquid chromatography (HPLC), and it allows scientists to separate and identify all the individual components in a substance, as well as quantify those components.

With cannabis and products derived from it, the lab is looking to identify cannabinoids, like THC and CBD among many others. The cannabinoid profiles of the reclaim tested all showed that reclaim does retain all five cannabinoids found in marijuana flower, which was a bit of a surprise.  In particular, their samples contained a pretty impressive amount of THC, some CBD, and a fairly high percentage of CBN, which can produce a sense of body stone and sleepiness.

This is a tough question to answer because the lab only had the reclaim, not the original concentrates. But luckily, each sample had pretty different characteristics that you can use to guesstimate how much THC your reclaim might possess.

The takeaway here is that reclaim can retain a significant portion of its THC, but only if it’s relatively fresh. Lighter color appears to be an indicator of better quality reclaim, and definitely don’t use anything that’s completely opaque and black. It seems like common sense, but for the record, experts strongly recommend against the use of anything that could be labelled as “crusty”.

The initial quality of your concentrate will have a massive effect on the quality of your reclaim, so think about going for the top-shelf stuff like solventless and CO2 extracts.

What to Do With Reclaim

Aside from simply dabbing it again, many folks like to use their reclaim for other purposes. Here are just a few ideas for the rookie reclaimer:

Arguably the most popular use of reclaim is in edibles. While dabbing reclaim doesn’t usually taste bad, many people are turned off by the idea. You can use reclaim just like you would oil in a recipe—but do not ever try substituting reclaim for cannabutter! It’s still a concentrate, so just a little should do the trick.

Tinctures are great for anyone who wants a little dose of cannabis goodness without smoking, vaping, or scarfing down brownies. All you need is one of those little dark dropper bottles that essential oils come in, and some more of that high proof alcohol you used to clean the reclaim out in the first place. Just place some reclaim in the bottle with the alcohol and shake it up as well as you possibly can.

Again, potency should be at the forefront of your mind when experimenting with tincture. Be sure to incrementally experiment with your dosage, and never double up to try and get a buzz going faster!

Reclaim is already easily absorbed by the skin and can do wonders for pain and inflammation, but you probably don’t want to deal with the stickiness involved. The solution? Mix it with coconut oil for smooth application. You can also add fragrances like mint or lavender to enhance the aroma, or add some beeswax to alter the texture.

How to smoke or vape reclaim?

There are several ways to smoke or vape reclaim, but let’s be honest now: unless you vaped very flavourful strains (Tangie, Shoreline, etc.) at very low temperature, reclaim is not as tasty as other concentrates. Its taste may remind of pencil leads, a bit unpleasant, and its texture is not as attractive as BHO, rosin or hash.

We recommend using a few drops of terpenes to improve the smell and taste of reclaim. You don’t need to do this if you don’t have terpenes at hand, but the quality of the product is highly increased. It is not by chance that most lovers of dabbing store their reclaim for the hard times when personal stocks are low!

Since reclaim is already decarbed during the vaporisation of the resin, its psychoactive effects can be noticed if ingested. A good idea is to mix it with some fruits, it is a very refreshing way to enjoy your reclaim!

Of course, you can always ingest your reclaim directly or fill some capsules with it, also cook some good cannabis recipes like space cakes, etc.

Remember that reclaim and any edible cooked with it contain THC and are thus psychoactive, so keep it out of reach of children, pets or persons who don’t want to experience the feeling of “being high”.