What is Live Resin Weed Concentrate? 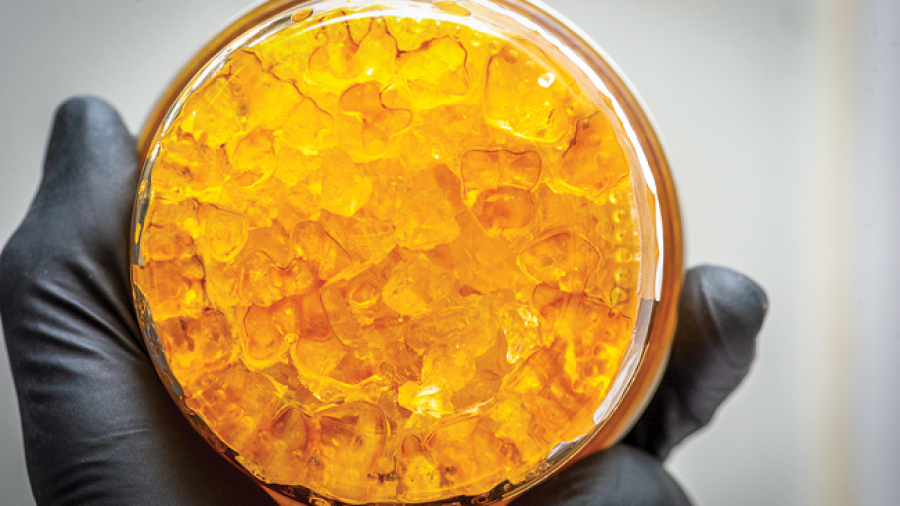 There is a wide range of cannabis concentrates to enjoy out there, including shatter, wax, dabs, hash oil, and BHO. Dubbed ‘the future of cannabis’, concentrates, as the name suggests, are extremely potent forms of weed with an extremely high THC or CBD content. There are concentrates on the market with a THC content of over 90%, so it doesn’t take much to achieve a satisfying high. Likewise, a small amount will do to treat the symptoms of any of the medical ailments that marijuana is purported to assist.

Live resin is a relatively new form of cannabis concentrate that is taking the industry by storm. Not only does live resin wax provide you with a potent concentrate, but it also enables you to enjoy the real aroma and flavor of the marijuana plant. If you’ve ever been lucky enough to see, feel, and smell a cannabis plant as it is being harvested, you’ll know that it is an entirely different animal to the concentrates you find in dispensaries.

The terpene content of living buds offers astonishing aromas, and a single whiff is like walking a stairway to heaven. Alas, once the weed has been harvested, many of the processes that occur between the period when the plant is cut to when you get hold of the final product remove the majority of the weed’s aromas and flavors. Too many extraction techniques leave you with a product that gets you high but lacks the elegance, bouquet, and taste of fresh marijuana.

If only there were a way to maintain the integrity of the plant so that you receive a concentrate that contains all the magic of cannabis. Thankfully there is, and in this article, we will show you how to make live resin. One of the main differences between live resin and rosin, for example, is that the former requires trained technicians and expensive equipment. In other words, you can try to try to create live resin, but it will cost you!

What is Live Resin?

Live resin is a form of cannabis concentrate created via a specialized technique, and it quickly became popular in states such as California and Colorado soon after marijuana was legalized. It is similar to CO2 and BHO concentrates insofar as it requires the right equipment and experienced individuals to complete the process correctly.

Live resin extraction involves the cryogenic freezing of a newly harvested marijuana plant at temperatures below 292 degrees Fahrenheit. The process is also known as full-spectrum, because it involves the whole cannabis plant including the stalk, branches, and leaves. Aficionados love live resin shatter because it helps to preserve the terpene profile of weed. If you use CO2 and BHO extraction, many of the terpenes are lost because they utilize high heat, dissolving any terpenes with a low boiling point.

Typically, once a cannabis plant has been harvested, it is then cured and dried, but this process also damages a plant’s terpene profile. When you purchase cured concentrates, you are buying a product that lacks the true essence of a marijuana plant. When a plant is cured, manufacturers wait a certain amount of time to allow the weed to wick itself of moisture and chlorophyll prior to the extraction process.

During this period, the plant’s trichomes are exposed to heat, oxygen, physical agitation and light. All of these factors help degrade terpenes, so the concentrate you receive lacks the aroma of the plant and also ensures you miss out on potentially therapeutic ingredients.

You’ll find live resin extracts in a variety of colors and forms. The type of cultivar, or strain, used for the concentrate affects a lot of the chemical and physical characteristics of this extract. Live resin is chock full of terpenes, and in greater proportions than other concentrates. With the additional essential oils, the consistency is typically more fluid than other concentrates. The more terpenes, the runnier and more malleable the concentrate. The most common consistencies of live resin are sap, sugar, badder, budder, and sauce.

How Is Live Resin Made?

Live resin is one of the newest concentrates around. Its origins can be traced to 2012-2013 when a team of growers from Colorado pioneered the current live resin extraction process.

The process begins by flash freezing freshly harvested cannabis plant matter. This usually happens by either placing it in a freezer containing dry ice or by being slowly dipped into a container filled with liquid nitrogen. The plant matter is kept frozen right until it is ready for extraction. Usually, extraction takes place within 36 hours of the plant material thawing.

Most live resin is extracted using a simple process that is similar to that used to make most other concentrates. Plant material is passed through with a solvent which is then vaporized out of the final product. The main difference is that the solvent is cooled to -40℃/-40℉ for extraction. The final product is also purged of solvents at a much lower temperature than when making other concentrates.

However, not all live resin is produced this way. Some concentrate makers may modify the process in order to produce more unique products.

Live resin concentrates are usually named after their form and viscosity. You can find live concentrates under names such as “sugar,” “sauce,” “sap,” “jelly,” “badder,” and “shatter.”

Most people prefer to dab or vape live concentrates. These consumption methods allow for better enjoyment of the concentrate’s terpenes – especially dabbing. By comparison, smoking live resin out of a bowl or joint is rather wasteful as many of the terpenes it contains are destroyed immediately by the high heat of fire.

You can also find these concentrates packed inside of pre-filled vape cartridges and pax era pods. Simply attach to a 510 battery thread or Pax Era vaporizer for maximum vaping convenience.

Why Does Live Resin Skip the Drying and Curing process?

The typical process for preparing cannabis for extraction includes drying or curing the raw plant material. Ingesting fresh cannabis won’t give you a high. Drying the harvested cannabis prepares flower to be exposed to heat and to decarboxylate the active compounds that produce the psychoactive and therapeutic effects by removing the moisture accumulated during the cultivation process without degrading or evaporating the terpenes. The goal is to prepare the flower to be consumed for its psychoactive and therapeutic effects without sacrificing all of the flavor and aroma.

The downside to the drying and curing process is that you’re bound to lose some terpenes in the process. Terpenes give us the unique tastes and smells of cannabis cultivars, from piney to skunky to citrusy, and also change the character and intensity of users’ highs. When cannabis buds are fresh, they contain their highest level of terpenes. During the curing process, where cannabis is left to dry for an average period of seven to 10 days, the most volatile terpenes evaporate and change the overall flavor profile of the flower. A 1995 study from the University of Mississippi measured the differences in the amount of terpenes from a fresh cannabis plant to those that had been dried over various lengths of time. Researchers found that drying a plant for a week at room temperature resulted in a 31% loss of terpenes.

The monoterpene-to-sesquiterpene ratio affects the flavor profile of cannabis, as well as any concentrates made from it. Monoterpenes such as myrcene, limonene, linalool, and terpinolene are commonly associated with hops, citrus, lavender, and eucalyptus — the floral, fruity, and aerial flavors in cannabis. Sesquiterpenes such as caryophyllene and humulene are commonly associated with basil, black pepper, cloves, and cinnamon — the spicy flavors in cannabis.

Live resin, using fresh cannabis plants at their peak amounts of both sesquiterpenes and monoterpenes, is able to provide a dabbing experience with more floral, fruity, and aerial flavors than concentrates made with nug run or trim run cannabis.

Terpenes have also been shown to aid — even heighten — the effects of THC, cannabidiol (CBD), and other cannabinoids. In a study published in 2011 by the British Journal of Pharmacology, Dr. Ethan B. Russo wrote about the entourage effects of cannabinoids and terpenes. For example, myrcene — an essential oil found in hops, bay leaves, and cardamom — is commonly found in cannabis. Research supports a hypothesis that myrcene, in combination with THC, may yield the familiar couch lock experience. Terpenes can really boost and amplify our experiences with cannabis.

When Kind Bill was harvesting his plants in the early 2010s, he strongly believed it’d be worthwhile to somehow harness the aroma and flavor of fresh cannabis. The proof is in the resin. The potency and flavorful richness of Live Resin has established it as a sought-after and very desirable concentrate.