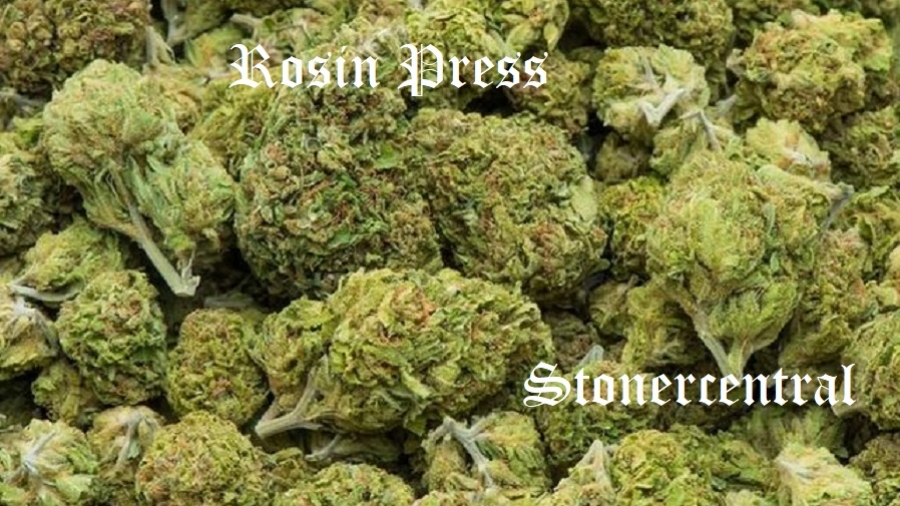 If you’re thinking about making rosin, it’s a good idea to know what you’re getting into! Rosin is a solventless (that means no chemicals) cannabis concentrate that you can make at home. Since it’s solventless, it’s a lot safer than concentrates that use solvents like BHO or Shatter. Rosin is versatile; you can place it on flowers as a “topper”, or you can smoke it as a “dab” if you have the appropriate equipment. In fact, if you’re looking to turn your weed into a dab-able concentrate, rosin is a great way to go.

Rosin vs. Resin vs. Live Resin

If you’ve been to a dispensary, or if you’re active in the cannabis community online, you’ve probably heard of these three similar-sounding things. They’re pretty different from each other, but it’s not as complicated as people make it seem.

Rosin is the result of putting cannabis under intense heat and pressure. If you stick some weed between two hot plates and press the plates together as hard as you can, a golden/golden-brown substance will spill out. That substance is rosin!

When you hear the word resin, it can refer to one of two very different things. One usage refers to “the sticky stuff” on your plants, aka the trichomes. This is the stuff you can collect in a grinder as “kief”. You could also use cold water to agitate resin off your weed (bubble hash) or freeze the trichomes off your weed (dry-ice hash).

Resin also refers to the black sludge leftover in bongs and pipes after extended use. This type of resin is also called “reclaim”, and many people smoke this leftover gunk so they don’t waste weed. Although this can be effective in a pinch, it’s about as gross as it sounds, and we don’t recommend doing it. The stuff is sticky, stinky (not in a good way) and it stains everything it touches.

As the newest kid on the block, Live Resin is one of the most sought-after concentrates available. Live Resin is made from freezing a newly harvested plant then using additional means to extract the trichomes from the plant. This is usually done with a solvent and it takes some sophisticated equipment to do.

Wait, I’ve heard these names before…

If you think you’ve heard the terms “rosin” or “resin” before, it’s because you probably have! The lack of legal legitimacy makes it so that many of the terms we use as cannabis growers are repurposed from other stuff.

Rosin refers to a substance used on the bows of cellos and violins. Rosin makes it easier for the bows to grip the strings of their respective instrument.

Resin is a thick substance made by plants that is usually composed of terpenes. This definition is perfect for what we’re talking about, except that resin can refer to the sticky stuff from any plant.

Made with high-heat and intense pressure.

Makes a strong, sticky substance that you can dab or put on flowers

After drying, you’ll have a crumbly pile of tiny, super-potent pebbles and dust

Learn how to make Bubble Hash

Makes a golden-green powder that can be sprinkled on flowers

Like Bubble Hash, but uses Dry-Ice instead of cold water

Learn How to make Dry-Ice Hash

If you’re going to make your own homemade rosin, there are two main methods: you can use a dedicated rosin press, or you can use a hair straightener. Both these methods will work, but they each have their strengths and weaknesses. In just a bit, we’ll go through each method of making rosin and some of the pros and cons of each technique.

Before You Start Making Rosin…

Rosin is just plain great! It’s impressive, fun to make, and even more fun to use. However, before you start on your rosin making journey, there are a few important pieces of information you should know:

Rosin is weed intensive. It takes a bunch of weed to do, and if you’re lucky with a high-quality hydraulic press and a cooperative strain, you’ll get 25% of your weed-weight back as rosin. In my experience, a hair straightener should return between 5%-10% while a non-hydraulic press (like the one I use in this tutorial) will get you 8%-17% That number can get a little higher or a lot lower and that largely depends on your rosin press, your technique, and the weed you start with. Some strains will make lots of rosin, and some will make very little. Seriously, your weed will make a huge difference in determining how much rosin you can press out of it.

If you harvest lots of weed at a time like with this method, you can go crazy making rosin without worry!

Making rosin involves high levels of heat. Be careful not to burn yourself during the process of pressing, no matter which method you use.

You will have to experiment a bit. Although you can use the default settings provided below, you’ll do even better if you test out different strains, temperatures and length of pressing time.

How Much Rosin Will I Get?

This is a common question growers have before they invest their homegrown weed into making rosin. There isn’t an exact answer since no one can predict the future. However, there are a few factors that will give you a good idea of what to expect from your next pressing.

Strain – The strain you use will make a huge difference! Some strains make tons of trichomes and will give you good returns on rosin, some strains will make next to nothing.

Pressure – The more pressure your rosin press can produce, the more rosin you’re likely to get.

Heat – In short, less heat (down to 220°F) will produce a better product, but less yield. Higher temps will produce more rosin of lower quality.

Moisture – Too-dry buds will soak up much more of your rosin before it can make it to your parchment paper. Buds at about 62%RH will work great.

Age – Although we can’t say this definitively, our testing shows that newer bud seems to put out more rosin than older bud. This could be a side-effect of moisture, but again, we don’t have proof besides informal testing.