How to Smoke Kief 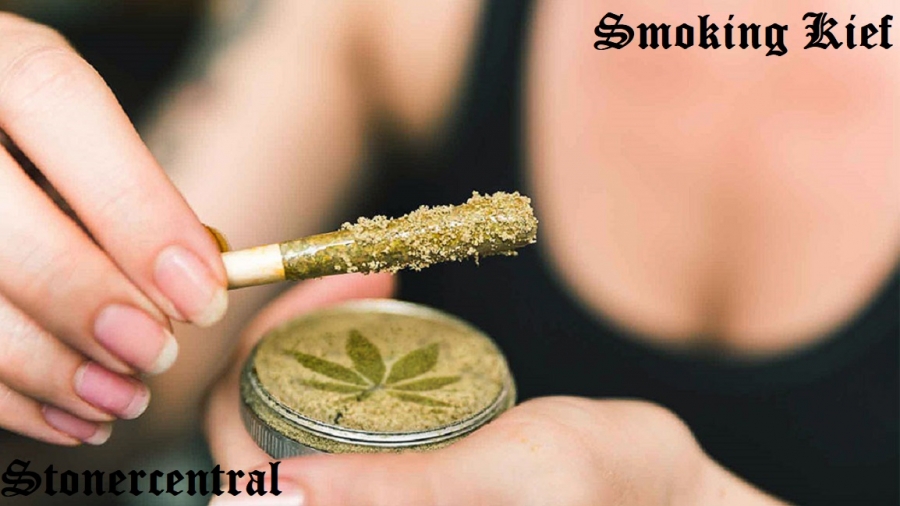 Kief is trichomes from cannabis flowers that can be collected and used in a number of different applications. Trichomes contain the cannabinoids and terpenes produced by the cannabis plant—that’s what makes kief so unique. Because kief consists almost entirely of pure trichomes, it is an incredibly concentrated and potent cannabis product.

Kief is typically collected in one of two ways. The less common method is to collect kief using a series of filters and screens to separate it out from the rest of the plant matter. The more common method is to use a weed grinder with a kief collector.

Collecting kief with screens and filters

Collecting kief with a series of filters and screens requires much more plant matter than collecting it in your grinder, and is typically used to make homemade concentrates, most notably bubble hash. For this method, you’ll need a series of increasingly fine filter screens. The easiest way to do this is with a set of bubble bags and ice.

Begin by layering your bubble bags, one inside the other, with the largest-gauge filter being the innermost bag and the smallest-gauge filter the outermost bag. Dump a bunch of cannabis plant material and ice inside the bags and agitate the whole thing. The idea is to freeze the trichomes, making them brittle and easy to break away from the plant matter.

As you agitate the bag full of weed and ice, all the trichomes will fall off to the bottom of the bag. Now lift out the inside bag (the one with the biggest holes in the filter). The bottom will be lined with all the plant matter and the largest particles. Discard the plant matter, scrape away the big particles on the bottom of the bag, and save them in their own separate place.

Now, repeat this process with each bag. As you go, you will collect increasingly fine particles of plant matter and kief until you reach the final bag, the one with the tiniest filter. At that point, you will be collecting the purest, most potent kief, without any other plant matter. Let the kief dry and you’re ready to smoke it on its own or to press into another product such as hash.

Collecting kief with your grinder

The more common method for collecting kief is to use a multi-chamber weed grinder with a filter screen. This method is very simple. As you grind your herb, chunks of plant matter fall from the grinding chamber into a collection chamber. The floor of this collection chamber is a wire mesh screen so that the finer particles of kief fall through into a specialized kief collector. After grinding a bunch of weed, you’ll eventually accumulate enough kief to scrape it out and smoke it.

People like kief because it’s potent and easy to collect. Basically, kief is a simple DIY way to make concentrates at home collecting trichomes that have fallen off the weed you’re already smoking. Additionally, kief is very versatile. If you collect enough of it you can heat or press it into a concentrate like hash. Or you can simply add it to a bowl, joint, or any other weed-smoking method you like to give your sesh a huge boost of THC.

Many people end up not really using kief that often because it can sometimes take a while for enough to accumulate in your grinder to really use. Further, now that cannabis concentrates are so widely available and of such high quality, many concentrate fans find it much simpler to buy concentrates from a dispensary rather than patiently and meticulously gather kief on their own. They get a better product this way, too.

Most people who smoke kief collect it in their grinder rather than getting tons of plant material and running it through bubble bags. If you want to smoke kief, here’s what you’ll need for the grinder method:

Once you’ve got a multi-chamber weed grinder with a built-in kief collector, you’re ready to start building up your stockpile of kief. Simply grind your weed like regular and after you’ve ground up a decent amount, check the kief collector. Once you’ve got enough to use, it’s time to harvest and smoke it.

Step 2: Collect kief from your grinder

Before doing anything else, put your grinder in the freezer for a few hours. This will freeze all the leftover kief, making it brittle and much easier to scrape away from the grinder.

Remove the grinder from the freezer and unscrew the lid from the kief collector. Using a small scraping tool—most grinders come with one—gather the kief into a little pile. Now, being careful not to spill anything, tip the grinder and pour the pile of kief into a small, clean storage container.

Now that you’ve collected the bulk of your kief, it’s time to go after the stuff that’s a bit harder to get out of the grinder. To do this, try using a paintbrush, toothbrush, or small pipe cleaner. Carefully scrape or brush all surfaces of the grinder, including the bottom and edges of the kief collector, the filter screen, the main chamber of the grinder, and all grinding teeth. Add whatever kief you gather in this step to your storage container.

Smoking kief is very straightforward. Simply add it to whatever you normally use to smoke weed. Some of the most popular ways to smoke kief include the following:

If you’re ambitious and looking for a cannabis adventure, you can make your own moonrocks. To do this, you’ll need a nug of your favorite strain, hash oil or another concentrate that’s been warmed to the point of being malleable and sticky, and a bunch of kief.

Coat the nug in the concentrate, then cover the entire thing in a layer of kief. Make sure you do this when the concentrate is still gooey—the whole idea is to get the kief to stick to the concentrate. After your moonrock has had time to cool and harden, break it apart into smaller chunks, being careful not to knock off the outer layer of kief, and smoke it the same way you do regular herb. Moonrocks are known for being powerful, so get ready for a very strong high.