How to make a good homemade pipe? 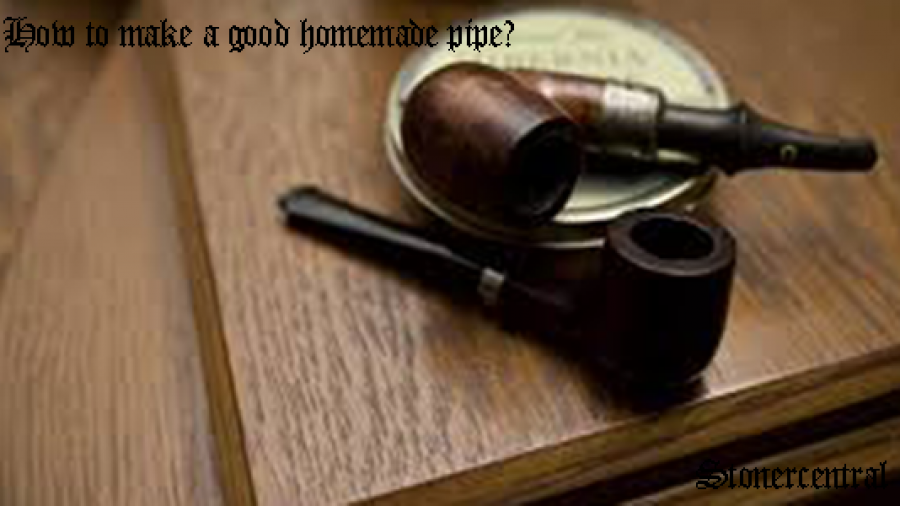 I am a little curious as to why you’re searching how to make a homemade pipe. But I won’t keep you long. Here are 10 very unique ways to quench your thirst for a good smoke, and also a few tips to make sure you have everything in place. Let’s start.

We have all come across situations that we had never imagined to be in. From the pandemic to a hiking trip where you forgot your lighter, every stressful situation has been the motivation for invention. Whether you tried the cavemen way to light up your joint or just discovered a last-minute fix, the man always finds something to makeshift while the original object of interest is missing.

Honestly, it is annoying to have this powerful craving to smoke, only to realize you don’t have the equipment. It might be rare, but it does happen once in a while, which is probably why you are here. Whether your friend who was supposed to get the bong, forgot or just didn’t turn up or it is too risky to keep the smoking instrument in your house, we got your back buddy!

Before we jump into the many wonderful ways to make a homemade pipe, here are some tips and tricks to get you through.

The apple doesn’t fall far from the tree. The tree can then be burned in the apple ;). Apples are great to turn into smoking devices because they taste great and are easy to cut into.

How to Make an Apple Bowl

I’d be lying if I told you that I didn’t almost fall in love with the first Stoner chick I saw make a bowl out of an apple in about 3 minutes back in my party days. I figured it would be cool to learn how to make one, and give me a reason to talk to here/smoke with her.

Find a ripe apple and stab a pencil size object through the top down to the middle but not all the way through. This hole is for the bowl pack.

Take that same pencil and poke a hole in the side of the apple that is perpendicular to the first hole you made. Do not poke this hole all the way through the apple either. These two hole should meet in the middle of the apple. This hole will act as the mouthpiece.

Blow through the holes to make sure they are intertwining as well as to clear any excess apple bits clogging the path up.

Make a third hole in another side of the apple that connects to both pathways. This hole will act like a rush to make sure it’s in a good spot that your finger can reach while you hit it.

Shave off the edge of the top hole to make it bowl-shaped and place your flower in the carved out area.

Light the herb and enjoy the fruity taste in every hit!

This is the easiest way to create a do it yourself smoking device. It can also be done with other fruits and vegetables that are sturdy like POTatoes, cucumbers, and even pomegranates.

If you like sweets, then try out this amazing homemade herb pipe.

How to Make a Starburst Hand Pipe

Okay, so this is going to be messy and sticky. Honestly, whoever came up with this was already extremely stoned, or just down on their luck. Either way, you should be prepared for an absolute mess while making this homemade hand pipe. However, it is worth it when you hit something that tastes like a fruit salad.

Take a pack of Starburst and unwrap each individual starburst.

Stack all the Starburst together in the packet besides two.

Stab a skewer through the connected Starburst in order to keep them together. This also creates an air pathway. Stab it all the way through to the other side to create a rush hole at the end.

Stack the two leftover Starburst on top of the lined up Starburst. These will act as your bowl pack.

Poke a hole from the top two Starburst down to the hole originally made from the skewer.

Shape the bowl so it can hold the amount of herb you want to use in the top two Starburst.

The Starburst can also be mashed together and shaped as if it were clay. If you are having a tough time creating this form of the Starburst pipe than soften up the Starburst by heating them up in the microwave for a few seconds and shape them into a regular bowl.

This may be a bit messy and sticky, but in the end, it is a pretty creative and cool way to smoke.

Pumpkins may not be the most common household item but since fall is approaching they may be common to come across. Because of their various shapes and sizes when compared with other foods, pumpkins are great for making homemade smoking devices.

How to Make a Pumpkin Bong

The size and shape differences make each one completely unique, and you get the opportunity to make a bowl pack in them that is relative to their size for being able to include friends in your smoking experience, or packing extra amounts of herbs into your homemade bowl.

The pumpkin bong is the biggest household smoking item on the list.

Find a pumpkin and hollow it out. It does not need to be cleared out as it does for pumpkin carving but you should remove the skin from the walls where the mouthpiece and bowl will go.

Cut a small hole on one side of the pumpkin so a metal nut can be attached and used as the bowl piece. You can also simply carve out a bowl similar to the apple bowl if you do not have a metal nut.

Take a straw or another circular sturdy material and stab in into the pumpkin the side opposite of the bowl piece. This is your mouthpiece. Sockets also work great, as long as they have a wide enough top part to fill with herbs and a skinny enough bottom that will act as a screen so too much herb does not fall through while smoking.

Make a rush hole if needed.

Add water if you prefer. We recommend trying it without water first.

Light it up and enjoy a different kind of pumpkin spice!

A waterfall bong is easy to make, and creates a cheap handmade bong that makes for an interesting smoking experience.

How to Make a Waterfall Bong from Home

In order to make this homemade bong, you will need:

These are one of our favorites. They take minimal amounts of herb and produce one gigantic hit.

Burn the center of the bottle cap so the socket can be pushed through. A pencil or something sharp can be used to penetrate it first. Make the hole small enough so the nut is tight against the bottle cap.

Burn a small hole the size of a pencil an inch above the bottom of the bottle.

Pack the nut with herb.

Place your finger over the hole in the water bottle and fill it with water.

Place the cap back on the water bottle.

Light the herb in the cap while releasing your finger from the plugged hole letting the water flow out. The herb will not burn unless the water is released from the bottle. This creates a vacuum for the smoke.

Leave a little bit of water at the bottom of the bottle to make for a cleaner hit once the herb is burned and the bottle is filled with smoke.

Remove the cap and inhale all of the smoke in one hit.TIPS: Usually heating the cap up first and then poking a hole in it, heating it up more and then shoving the socket in the hole while the plastic is still hot makes for the most airtight fit for the best smoking experience. The more airtight, the better the vacuum effect, and the better hits you will be able to pull with this homemade waterfall bong.

Try to keep in mind that the plastic takes a while to heat up, but then will quickly burn into large holes. It may take a few tries so be prepared with extra water bottles and caps on deck.

Once you have made a few waterfall bongs from home, you will be a master of homemade smoking devices and will be able to whip these babies up in no time.

A Gravity Bong is very similar to a waterfall in the way it is made but it can be repacked easier. They are also sometimes referred to as G-bongs, mainly because people began making them out of Gatorade bottles. This makeshift handcrafted water pipe may not be pretty, but it gets the job done.