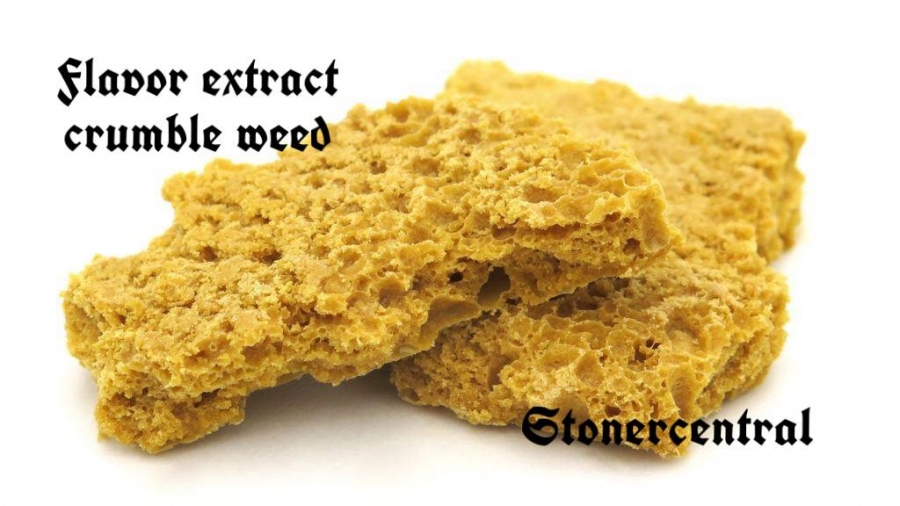 A cannabis extract identified by its malleable texture that falls apart, or “crumbles,” when handled. Unlike other forms of concentrates, crumble — sometimes called “honeycomb wax” — is quite versatile, and not limited to dabbing. Some sprinkle the extract over the top of cannabis buds in a bowl, blunt, or joint. The fragmented texture results from elevated temperatures used during the solvent removal process, or by whipping the extract under the presence of heat.

“I prefer using an electric nail when dabbing my crumble.”

Crumble is an extract, a form of cannabis concentrate that’s produced using a solvent. But unlike other concentrates, which are generally fluid in their consistency, crumble is defined by its unique, crumbly texture. In fact, when made correctly, the final product is the driest type of extract on the market. Crumble can be made with processes that include either trimmed, cured nugs or a freshly harvested plant. It can be consumed on its own, or combined with flower in a variety of ways. This versatility, combined with its potency, makes this increasingly popular among cannabis consumers.

How to Smoke Crumble

One option for smoking crumble is to add it to blunts or joints to enhance the effects. When the flower is flat on the rolling paper or tobacco leaf, add small pieces of the concentrate, ensuring that as much of it lays in the center as possible. Once it’s rolled up and ready, light one end and draw from the opposite end. When the smoke is inhaled, the flower and crumble combination produces significantly heightened effects.

If you’re smoking your flower topped with crumble in a bong or pipe, fill the glass bowl with flower and add the concentrate to the top. Light the mixture with a lighter and, depending on the device, pull air into your lungs when the smoke is ready. The flower and crumble mixture will produce a smoke that’s more potent than flower alone.

How to Dab Crumble

“Dabbing” is another popular method of consuming crumble. Dabbing uses a particular type of water pipe called a “dab rig,” or simply “rig,” as well as a flat bowl called a “nail.” Unlike glass bowls used for smoking flower, nails are designed to withstand higher temperatures.

Use a dabber with a spoon-shaped tip, as opposed to a flat-tipped dabber that’s used for most other extracts. To take a dab, preheat the nail with a gas-powered torch, preferably butane (propane-fueled flames are much hotter and could damage the nail). Once the nail reaches the correct temperature, turn off the torch and safely set it aside. Use your spoon-style dabber to drop the concentrate onto the nail. When the crumble comes in contact with the hot nail, the extract quickly vaporizes. As the vapor emerges from the nail, inhale through the mouthpiece on the opposite end of the rig.

As an alternative to using a gas-powered torch, an electric nail, or “e-nail,” can be used with a dab rig. An e-nail attaches to a dab rig just like a typical nail, but is heated using electricity rather than by a torch. When the e-nail has reached the optimal temperature, drop the crumble into it using your spoon-shaped dapper and draw in the vapor from the rig’s mouthpiece.

How to Store Crumble

Properly storing crumble helps to maintain its aroma, flavor, and potency, helping slow the natural degradation of the extract. Exposure to high temperatures, moisture, oxygen, and light speeds up the degradation process, which can change not only the unique characteristics of the concentrate, but also its effects as well.

Fresh crumble is typically soft and dry with a yellowish color resembling mustard. If it’s not stored properly, it can turn a darker color or harden over time. To ensure the longest shelf life possible, crumble keeps best in an airtight and lightproof container. The ideal containers for storing this concentrate are made of glass or silicone, rather than storing it in parchment paper. Temperature is a factor too: it’s recommended to store crumble in a cool environment.

How Crumble is Made

WARNING: THE MANUFACTURING OF CRUMBLE AND OTHER CANNABIS CONCENTRATES SHOULD ONLY BE PERFORMED BY PROFESSIONALS AS THESE PROCESSES CAN BE EXTREMELY DANGEROUS AND ILLEGAL IN MANY JURISDICTIONS.

For safety and health reasons, producing extracts should be left to professionals, as the setup and materials require precision and accuracy, and can quickly become dangerous.

Crumble can be made with just about any solvent, but similar to the butane hash oil or BHO production process, the most common techniques use a solvent such as butane. Other commonly used solvents include propane and ethanol. Using carbon dioxide (CO2) as a solvent for crumble will likely yield a watery solution, closer to a type of concentrate called sap, especially if there is any remaining moisture in the plant matter prior to the extraction process.

The extraction process is generally the same as with other extracts. The most significant differences come during the post-extraction process. Crumble is typically produced in special rooms that are specifically designed to contain large concentrations of flammable gases, by the following steps:

At this point, the extract is poured onto a pan and placed inside a vacuum oven to remove any residual solvents. The texture of the concentrate produced by this process is typically shatter and can be changed into crumble by either using higher temperatures during the vacuum purge process, or by whipping the slab on a hot plate prior to placing it into the vacuum. The exact vacuum temperatures and amount of agitation differ from strain to strain, but most crumble is purged at a temperature range of 110 degrees Fahrenheit to 135 degrees Fahrenheit (43.33 degrees Celsius to 57.22 degrees Celsius) at a pressure of -29 inches of mercury for 24 to 72 hours.