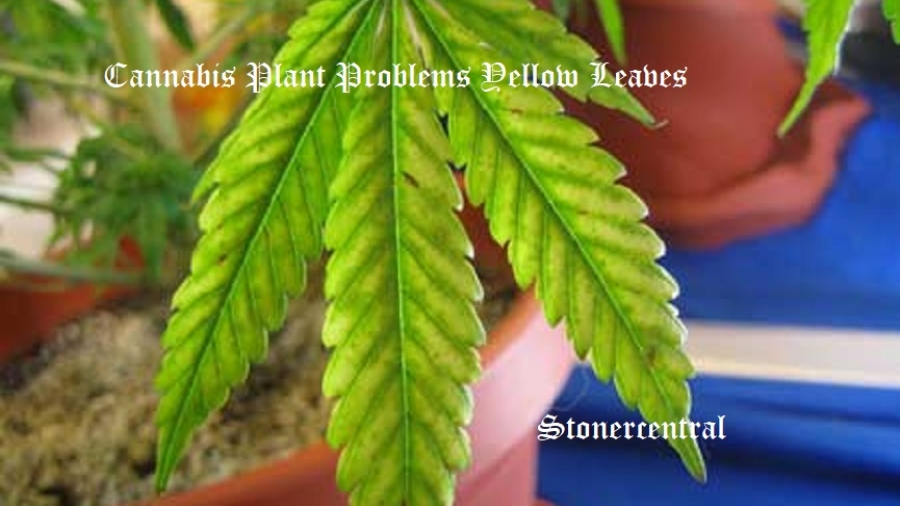 Are some or all of your cannabis leaves turning yellow? Maybe your leaves also have other symptoms like spots, curling, wilting, brown patches, etc. Marijuana plants may get yellowing leaves for several different reasons, so it can be hard to figure out the true root of the problem!

Example of yellow leaves on a marijuana plant caused by light burn, not a nitrogen deficiency.

Today I’ll break down the 10 most common reasons your weed leaves turn yellow, and I’ll show you how to make your plant green again!

Causes of Yellow Leaves (From Most to Least Common)

Yellow or other oddly colored leavesSpots, stripes or patches

Burning around the edges of leaves

In fact, basically any nutrient deficiency can be triggered by incorrect pH!

Growers who don’t make sure their pH stays in the right range will often run into nutrient deficiencies, even if they’re starting with a pure source of water and good soil!

It’s much more common to over-water than under-water cannabis plants, and the symptoms are very similar. In either case, the solution is to learn how to water your plants exactly the right amount at the right time!

Water dripping from a faucet animation – the amount of water (and frequency of watering) have a huge impact on your cannabis plants!Droopiness (it’s normal for plants to droop a little before the lights go out, but you know the drooping is a problem if it’s already happening at the beginning of their “day”).

Odd problems and symptoms from poor water practices including yellowing and sometimes other deficiencies.

Overwatering – leaves seem “fat” and swollen with water. Often you’ll have a feeling you may be overwatering your plant, especially if it’s a small plant in a large container.

Underwatering – leaves often seem “papery” and thin because they don’t have any water inside them. Chronic underwatering leads to overall yellowing and deficiencies.

Overwatering is most common with young plants since they still have small, weak root systems

You can hurt plants by giving too much or too little water at a time, and you can also cause persistent droopiness by watering too often or too infrequently

Bad soil with poor drainage can cause the symptoms of overwatering even if you’re watering the plants perfectly!

Growers who spend long periods away from their plants and/or don’t pay attention to their watering needs are much more likely to run into problems with droopiness!

Example of a cannabis plant with a Nitrogen deficiency – notice the leaves are pale and bottom leaves are turning yellow and wilting offPlants tend to be lime green or pale all over, even though the leaves appear healthy without stripes or spots

Yellow leaves tend to appear towards the bottom of the plant

Yellow leaves feel soft and are easily pulled off (in fact they usually fall on their own). If a leaf feels very stiff or is hard to pull out, that means it is not a Nitrogen deficiency

Affects plants which have “used up” the nutrients in the soil, which can happen after the plant has been the same container for several weeks or months.

Can happen in coco or hydro when the grower isn’t providing any extra nutrients (since there is no Nitrogen contained naturally in plain coco or water).

It is very unlikely you have a true Nitrogen deficiency if you’re providing your plants with the recommended amount of cannabis nutrients in the water.

Yellowing appears most on the parts of the plant closest to the light.

Yellow leaves do not pull out easily, even if the whole leaf is dead

Light burn often takes a few weeks to develop and is most common once the plant is past the 6th week of the flowering stage (when plants aren’t making many new leaves to replace old ones).

Yellow or burnt leaves near the light

Leaves start “turning up” at the edges, or forming “tacos”

Magnesium deficiency causes yellow stripes on the cannabis leaves between the marginsYellowing in between the veins on leaves, often located lower down on the plant.

A magnesium deficiency is almost always caused by incorrect pH though if you’re using heavily purified or soft water (such as RO – reverse osmosis – water) you may need a Cal-Mag supplement to make sure your plant is getting enough magnesium.

Iron deficiencies are unique because the yellowing always affects the newest growth; it does not happen to older leaves that are already green.

Unlike most other nutrient deficiencies that cause yellowing, yellow leaves from an iron deficiency will usually turn green, starting from the outside edges and working inwards.

Unless you are using RO or very purified water, an iron deficiency is almost always caused by incorrect pH. This is because cannabis needs very little iron, and most sources of water already contain trace amounts of iron.

When a shell first cracks, the round leaves inside are actually yellow. They only turn green once the plant starts getting enough light.

Note: Adult cannabis plants without enough light won’t grow well either, but they likely won’t have yellow leaves. In fact, adult cannabis plants that are getting relatively low levels of light will actually turn dark green since they aren’t using up nutrients for photosynthesis (the extra unused nutrients get stored in the leaves, causing them to appear darker).

You know your seedling needs more light when…

Seedlings are tall with small leaves

There is a lot of nodal spacing (stem between each set of leaves). Seedlings look “stretchy”.