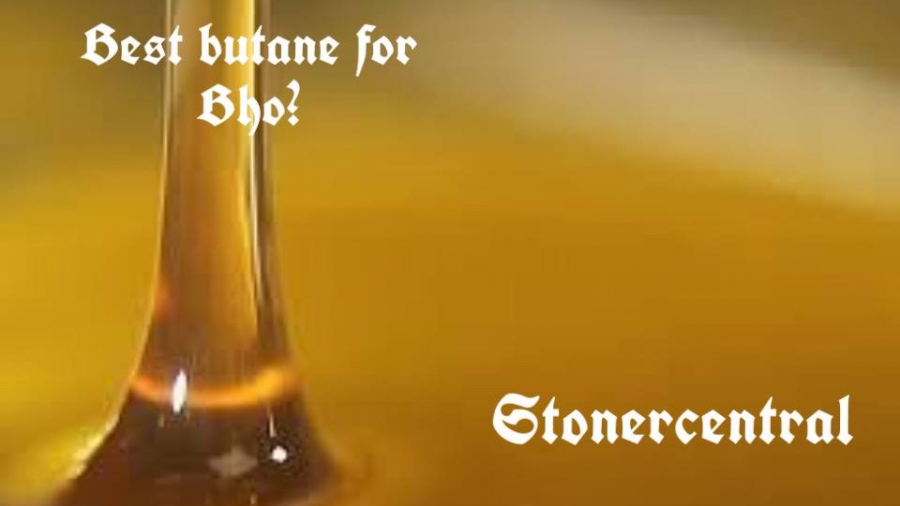 Now, I’m sure if you’re trying to learn how to make BHO that you already know what the hell it is.

But, for those of you that don’t, let’s take a quick look at what exactly it is.

What isn’t BHO? The most common non-BHO concentrates are live resin and rosin.

How to Make BHO with the Best Butane for BHO

It get’s its name from the process that it takes to make it.

So, how is cannabis oil made?

Well, instead of using water or alcohol like you would to make the hash, you use butane to extract the THC.

It’s made by placing plant trimmings or buds in a tube and dissolving the THC into the butane.

It’s not just the cannabinoids that are absorbed by the butane, though.

It also absorbs the various terpenes from the strain that you used.

This lets your wax take on the flavors of your strains—sometimes making them even stronger than when they were flower.

You then extract the concentrate from the butane using a special vacuum or a closed loop system that applies heat to it, keeping it at a low boiling temperature.

The hash that’s leftover is almost pure THC and is not for the faint of heart.

Make sure to be Safe: Is Butane Toxic?

I feel you need to know the dangers of making BHO, and that you’re better off buying the professionally made wax from a dispensary.

The entire process is playing with fire—literally.

And people HAVE died from making BHO.

You should only make BHO in a proper lab or an area with excellent ventilation (i.e., outside).

It’s also a great idea to have a fire extinguisher close at hand while extracting.

You also need to check your local and state laws to make sure you aren’t violating any laws in making BHO.

And it’s not just safety concerning making the BHO that you need to worry about.

Butane is not safe for human consumption, and you can end up smoking butane if your concentrates aren’t properly evaporated.

What Kind Should you Use?

The type of butane you use for your extraction makes all the difference in not only the purity and quality but also the taste.

And, while I’m going to tell you what we found to be the best butane to make wax you should play around with different types to see how it affects your wax.

It also has a LOT to do with the amount of wax you’re able to get out of a batch.

With a better butane, you’ll be able to pull more THC out of the cannabis.

The butane you choose will also determine the color of your wax (light-dark yellow).

But, what a lot of people don’t know, is that it also will affect the purge time.

Different butanes can even add minutes to your times.

Whip-it! is the best butane for BHO and has long been the favorite for avid BHO extractors.

It will give you a light yellow wax that gives you a nice clean taste.

You’ll love how well this butane preserves the terpenes.

What’s the most important factor in Whip-it! finding it’s way to the top our list is that it’s known for producing MASSIVE yields.

It also makes a smooth wax.

I mean, come on, we already cough enough from hitting wax, the last thing we need is for it to be harsh!

It’s also the butane that has the quickest purge time, and it’s easy to work with.

Our Whip-It! butane review comes back loud and clear!

They are the best butane to use for BHO.

Puretane is some of the only butane made here in America from American sourced gas—especially that’s made for BHO.

That’s right, the creator of Puretane is a serial cannabis entrepreneur that wanted to find a better butane for BHO.

Puretane is filtered 9x, and the gas is, according to its manufacturer, is 99.9998% pure butane.

It’s a little more expensive than some of the other butanes you can get.

However, you’ll love the clean tasting wax that this butane produces.

Colibri will give you more of a yellow wax, and the yield won’t be as large as Whip-It! or even Newport.

The wax it does put out is of a very high-quality, though.

It only retains the terpenes on a moderate level.

What this means is not as much taste of the cannabis will transfer to the wax.

The taste is nice and leaves no lingering tastes of gas in your mouth.

You’ll also notice you won’t cough as much when using Colibri.

Newport will produce some of the darkest looking wax you’ll see.

It also takes a really long time to purge—the second purge has been known to take forever.

Now, you may think I’m over here hating on Newport, but it has some outstanding qualities.

For instance, it has probably the second largest yield you’ll find, and it is one of the smoothest butanes that you’ll find.

Plus, it’s one of the most affordable butanes.

You get almost twice as much as the other guys for about the same price.

So, if you have a lot of flower that you want to extract you might want to go with Newport.

This is a butane that you’ll hear recommended by a lot of people—mostly because it’s so cheap.

The wax you’ll get with the butane is going to be a dark yellow, and it retains the taste of the flower pretty moderately.

It’s also known to not produce as much wax as any of these other butanes, but it does it a lot quicker than quite a few of them.

You might get more of a coughy wax with Vector too.

One of the reasons people love Vector is because of how the wax extracts.

It forms a honeycomb and then will quickly dry.

So, if you plan to make BHO make sure to do it in a lab or an extremely well-ventilated room (read: outside) with the proper supervision.

Also, make sure to take all the safety precautions such as PPE and having a fire extinguisher on hand.

The butane you use is going to affect the quantity, quality and taste of your concentrates.