Are edibles bad for your body 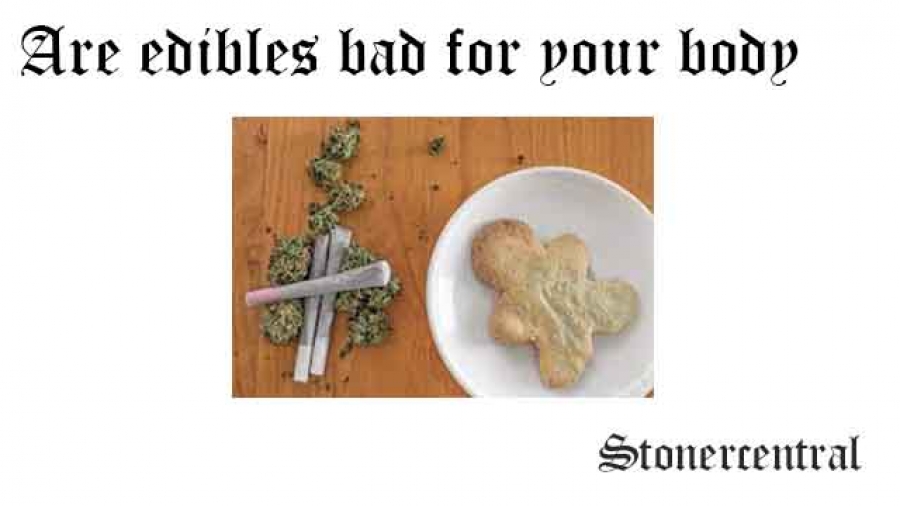 Despite their appearance, cannabis edibles — sweet treats like gummies and chocolate bars infused with tetrahydrocannabinol (THC), the primary psychoactive component of marijuana — can be risky for some users.

They may look just like candy, but these potent products definitely aren’t for kids. And that’s part of the problem.

In a new article appearing in the Canadian Medical Association Journal, researchers outlined the most prominent risks associated with cannabis edibles for different users and found that young people are among the most at-risk when it comes to overconsumption and accidental ingestion.

The other most at risk: older adults. And for those two groups, there are some serious potential adverse health problems that can sometimes result in a trip to the emergency room or just a really, really bad day.In places where marijuana is legal recreationally and there’s data available, cannabis edibles still remain just a small part of the overall industry. However, in some cases, as in Colorado, they’ve put a disproportionate number of people in the hospital.There are specific reasons for that, some of which are owed to the difference in how the body processes cannabis based on how it’s consumed.

How cannabis edibles affect you differently

Smoking results in a near instantaneous onset, whereas consuming cannabis commonly takes between 30 to 60 minutes. But that can vary depending on many different factors including the user’s metabolism and the contents of the edible itself.

“Overconsumption is a significant concern because of the delayed time to onset of its intended effects. Unlike inhaled cannabis, ingested cannabis must be digested first before being absorbed, and once it has been ingested, it’s on board, which means people might not feel effects immediately and hence inadvertently overconsume,” said Dr. Lawrence Loh, MPH, an author of the research and faculty member at the University of Toronto.

Other significant factors in determining how quickly an edible could kick in include: sex, weight, diet, and tolerance to cannabis.

The effects of marijuana edibles also last a lot longer than smoking, with peak THC blood levelsTrusted Source occurring around 3 hours after consumption.

The latency of the high from edibles can frequently result in an all-too-common scenario for some users: eating the edible, not feeling the effects immediately, and then consuming more.

By the time the effects are felt, the user could be in over their head.

Miracle Cure-All? Facts You Should Know About CBD Oil

While a desirable effect of THC is to feel more relaxed, says Stolbach, things can quickly take a turn for the worse if you accidentally overindulge. “Common overdose symptoms might be feelings of panic, a fast heart rate and anxiety,” he says. “These reactions can become really severe.”

Say that brownie tasted fantastic and you went back for seconds or thirds—at this point, excess calories and sugar are the least of your concerns. If that brownie was laced with a high dose of THC, you could be feeling these scary overdose effects for as long as 12 hours, says Stolbach.

The type of edible you consume can impact how your body reacts to it. THC is fat-soluble, meaning it dissolves in fats to be absorbed in your intestines. That’s why many edibles are dessert foods, such as brownies or cookies, because they’re made with THC-infused fats. “The thing that makes me nervous about [THC] dissolved in butter is that if the solution is unequally [mixed], some parts of your brownie or cookie will have a lot more THC than other parts,” says Stolbach.

Some states require edibles to be labeled with the amount of THC per serving—such as individually wrapped packs of gummies. However, many bakeries and facilities producing edibles may not be tightly regulated when it comes to how much THC is in each serving of that product. And even if they are labeled, just as with supplements, you can’t always trust the numbers in the absence of strict regulation. Consumers should do their homework to ensure the source of any edible they’re consuming is credible, as well as be mindful of where it’s coming from. It’s technically illegal to sell any food with THC across state lines, in most cases, according to the FDA.

Perhaps the most prominent difference between smoking marijuana and eating edibles is the delayed onset of effects associated with edibles. Whereas the effects of marijuana usually occur within minutes of smoking, it can take between 30 minutes to 2 hours to experience the effects from edibles. This delay can result in some people consuming a greater than intended amount of drug before it has taken effect.  Marijauna overdose is also referred to as acute marijuna intoxication. Research has shown that edibles are the form of marijuana consumption most likely to lead to emergency room visits for marijuana overdose, and the authors of at least one study believe that this is due to the failure of users to fully understand the delayed effects of these products.

Increased Likelihood to Cause Self-Harm or Hurt Others

Due to the delayed onset and uncertain potency of edibles, many people who use these products may unintentionally consume excessively high amounts of THC.  One of the consequences of taking in too much of the drug too quickly is users can become violent or unaware of their actions. These individuals may exhibit self-harming behaviors or hurt others while in this state, behaviors that they likely never would have engaged in while sober.  There have been several tragic incidents caused by unusual and risky behaviors stemming from the consumption of edibles. One man, while on a family ski trip, shot himself in the head hours after ingesting a number of marijuana-laced candies. Another man, while on a spring break trip with college friends, plummeted to his death after jumping off his 4th floor hotel room balcony mere hours after consuming a marijuana cookie.   Another man was recently sentenced to 30 years in prison for the fatal shooting of his wife. Prior to her death, the wife had called 911 out of concern for the erratic behavior and hallucinations that her husband was experiencing after eating marijuana-laced candies.