What is the Entourage Effect in Cannabis? 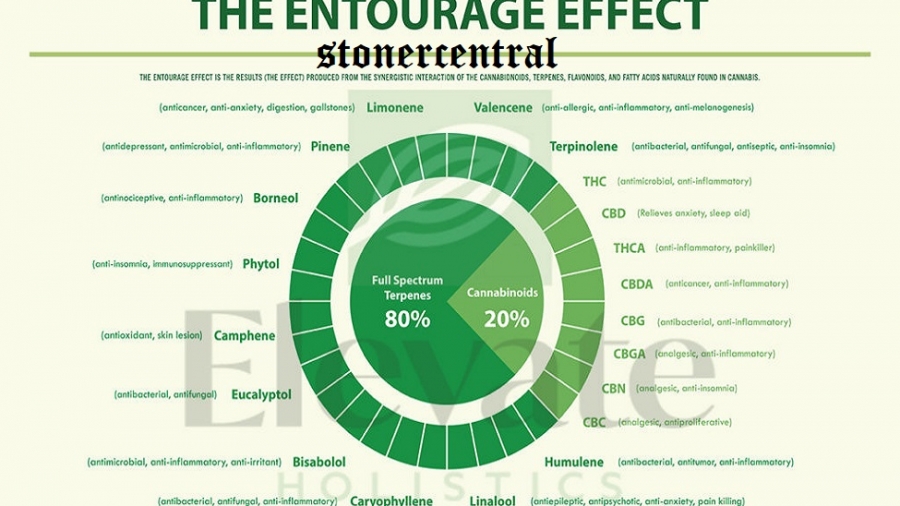 Take a close look at your cannabis buds. They’re covered in sticky, shining dots of resin, and in this resin are hundreds of therapeutic compounds that contribute to the effects and benefits of cannabis.

You’re likely already acquainted with the plant’s two most famous compounds, THC and CBD, but there are many other compounds the plant produces in lesser abundance that seem to play a supporting role in the overall effects of a particular strain.

This theory that various cannabis compounds work together to create unique effects and benefits has been coined “the entourage effect.”

What is the entourage effect?

When we smoke or vaporize cannabis, our bodies take in hundreds of botanical compounds. Each one arrives with unique effects and benefits, and their behavior may change in the presence of other compounds. This is the entourage effect.

It’s kind of like how your mood might change depending on your social environment. How do you behave when you’re alone, at a party with strangers, or hanging out with your best friend? Your mood and the personality you project shift depending on who’s in the room.

To illustrate the entourage effect in cannabis, let’s work with the two compounds you’re likely familiar with: THC and CBD. In a 2010 study, patients with cancer pain were given either a pure THC extract or an extract containing near-equal levels of both THC and CBD—patients given the THC/CBD combo reported having less pain.

But cannabis is far more than just THC and CBD. It also produces other cannabinoids like CBN, CBC, CBG, and dozens more—as well as terpenes, which are aromatic compounds also readily found in the essential oils of lavender, orange, black pepper, eucalyptus, and much more. With such a diversity of useful compounds in cannabis, the possible synergies could make your head spin with excitement.

Unfortunately, there are very few studies that explore these synergies in humans—it’s still only a theory supported by a small body of research, and, of course, loads of anecdotal evidence from curious cannabis enthusiasts around the world experimenting with new varieties of the plant.

Cannabinoids and terpenes potentially work together

This theory of the entourage effect is thoroughly described in a review called “Taming THC: potential cannabis synergy and phytocannabinoid-terpenoid entourage effects,” authored by Dr. Ethan Russo—a neurologist and pharmacologist who has long studied cannabis compounds and how they affect the body.

In this review, Dr. Russo details the studied benefits of common cannabis compounds, and based on their pharmacology, describes their potential synergistic effects. For example, the cannabinoids CBD and CBG have been found to inhibit the bacterial staph infection MRSA—how might they be even more effective when combined with the MRSA-fighting terpene pinene or when prepared with terpenes that increase skin permeability?

Potential synergies: Understanding the potential benefits of THC, myrcene, and caryophyllene, one might recommend this strain to someone looking to achieve sleep (thanks, myrcene), while simultaneously addressing pain and inflammation (thanks, THC and caryophyllene).

The diversity of cannabinoids and terpenes native to cannabis flower is often why some consumers prefer bud over extracts; there are so many compounds with their own respective potential benefits in the flower to enjoy.

A few more potential synergies detailed in “Taming THC” include:

To reiterate, the entourage effect remains an unproven theory. But as terpenes and novel cannabinoids become objects of consumer intrigue, we’re likely to find more research on the horizon.

So which cannabis products are more likely to promote this so-called entourage effect?

Oils, ingestible capsules, dabs, vape cartridges… full-spectrum extracts can come in many forms. What characterizes them as “full-spectrum” is the long list of chemical compounds they retain. That means the extract could deliver THC, CBD, CBG, CBN, myrcene, caryophyllene, limonene, and much more—all in one convenient package.

While many people prefer cannabis products that provide lots of cannabinoids and terpenes, there are reasons to enjoy isolates; you know precisely which cannabinoid you’re ingesting, and you don’t have to worry about absorbing any cannabinoids you may not be interested in.

Among THC-only medicines are synthetic renderings of THC, the two most common being Marinol (dronabinol) and Cesamet (nabilone). These are FDA-approved pharmaceuticals often prescribed to treat cancer-related nausea or pain. But as we saw in the 2010 study mentioned earlier, these isolate medicines may not be as effective as combination medicines that include both THC and CBD.

And considering CBD helps curb the adverse side effects of THC, notably anxiety, it’s not hard to imagine why some prefer a combination over pure THC. A 2011 survey on forms of consumption found only 1.8% of 953 patients preferred synthetic THC isolates over inhaled or infused methods.

A ‘treasure trove’ of medicinal possibilities

Raphael Mechoulam, one of the most esteemed cannabis researchers in history, calls cannabis a “neglected pharmacological treasure trove” in a 2005 paper. Neglected by researchers? Absolutely. But to some extent, by consumers like us, too.

For decades, cannabis has been regarded primarily as a vessel for the almighty high-bringer that is THC. Even in legal markets with a wide variety of options, many people stillreach for the strain with the highest THC content.

In response to this decades-long demand for higher highs, the plant has been bred to contain virtually nothing but THC. Practically every other cannabinoid is a whispered afterthought, with some high-CBD cultivars posing exceptions. Getting the plant to produce a diverse “treasure trove” of therapeutic compounds will require a lot of time—and consumer demand.

Interest in terpenes and rare cannabinoids is beginning to flow in, if only at a slow trickle. We’re starting to see, for example, cannabis breeders focus on CBG production and extract producers capture novel cannabinoids like CBN, CBC, and delta-8-THC. And research on terpene entourage effects is also increasing in interest.

With the continued spread of legalization and information, it’s nice to think we’re not too far off from unlocking the treasure trove cannabis has to offer.