Is indica or sativa better for nausea 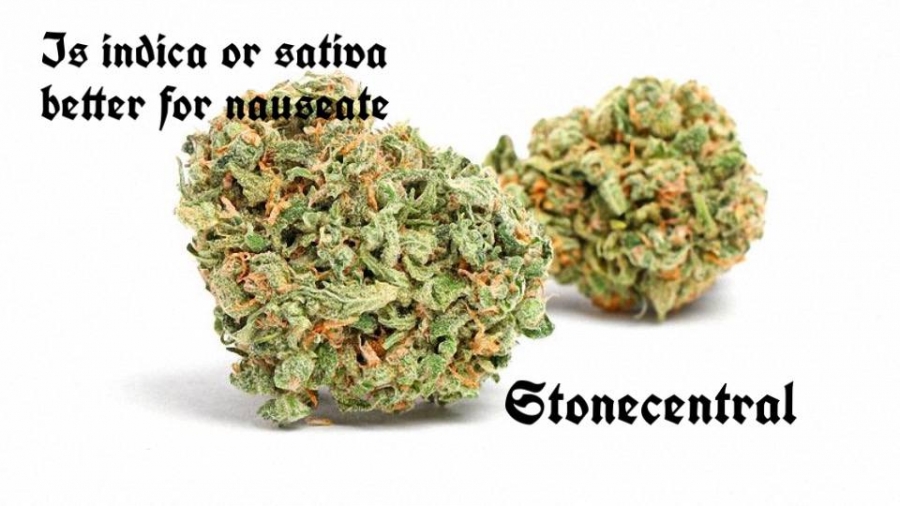 The number of studies that have been done on the medical benefits of cannabis is small – and frankly – embarrassing. Marijuana’s potential to help millions of people on a daily basis is so enormous that it should be a major focus of scientific and medical establishments.

The reason for that lack of substantial research is completely understandable. The U.S. laws that still govern pot make it difficult to conduct rigorous academic studies, so the indisputable evidence on what weed can, and can’t, do is extremely limited.

However, there’s one benefit of cannabis which has been fairly well-researched and is pretty much accepted in medical circles: its ability to stop or prevent nausea.

It’s been used by Britain’s health service to treat nausea, since way back in 1983. And even the American Cancer Society officially recognizes pot’s ability to treat nausea that’s a common side effect of chemotherapy, even though it also warns that doctors in many states still can’t legally prescribe or recommend cannabis to their patients. Marinol and other cannabinoid synthetics are the only available options.

Doctors may not be able to use pot as a first-line treatment for nausea, but that doesn’t mean you can’t use it on your own.

Nausea isn’t a disease – it’s a symptom. And there are many potential causes.

When you see a doctor and tell her that you’re feeling nauseous, that’s not the end of the exam. It’s just the beginning because she has to figure out what’s causing the problem. The cause could be an issue in your gastrointestinal system, anything from Crohn’s Disease to heartburn or food poisoning. It could be mental disorders like anxiety or panic attacks. It could be a bacterial or viral infection, hypoglycemia or motion sickness, an adverse drug reaction, or any number of other illnesses.

Nausea associated with each of those medical issues is normally treated with specific, prescription anti-nausea medications known as antiemetics. Antihistamines, serotonin antagonists and anti-anxiety medications are among the many possibilities, although over-the-counter products like Pepto-Bismol and Dramamine can be used for mild cases of nausea caused by gastrointestinal issues or motion sickness.

What many of the meds have in common, though, is that they’re prescribed based on the root cause of the problem.

Cannabis, by contrast, goes straight at nausea itself.

How Marijuana Use Helps Stop Nausea

When you feel nauseous or begin vomiting, it’s usually due to a sensation that originates in your body’s central nervous system. Whatever the root causes may be, your brain is simply reacting to them and sending signals to your body to indicate there’s a problem.

Research is still scanty, but it appears those signals are sent via neurotransmitters known as serotonin. And small doses of the cannabinoids in pot, particularly CBD, are very effective at blocking serotonin receptors – meaning they intercept the signals before the body begins to feel nauseous. (Apparently, the non-activated form of CBD known as CBDA, that exists before weed is burned or heated, works even better.)

Experts aren’t quite sure why, but THC can help, too. When the THC in marijuana binds to some of the endocannabinoid receptors in the brain, it can often prevent nausea and vomiting. The uplifting effects of some Sativa strains don’t hurt, either.

Bottom line: used in moderation, cannabis is a very good choice to fight nausea – at least until you find out if there’s something else seriously wrong that requires treatment.

Here are the strains that work best.

There are two pieces of good news here: sour diesel is an outstanding strain for mitigating nausea – and it’s one of the most common strains in America, so you won’t have trouble finding it. Sour diesel is Sativa-dominant with a strong but enjoyable head high, accompanied by body relaxation that’s definitely noticeable but usually not incapacitating. Its THC content is somewhere around 20%, with a much smaller but still relevant CBD and CBN presence.

This strain is quick to ease the discomfort of nausea. It’s also used by many patients to cope with depression, migraines, and general pain, or to boost their appetite (so get the nachos ready for post-nausea munchies). Sour Diesel’s effects last for a few hours, more than enough time for nausea to be suppressed. The one warning, which holds for any Sativa-dominant strain with a high THC/CBD ratio, is that those with anxiety issues would do best to stay clear since their anxiety could worsen with high doses.

Blue Dream has similar THC/CBD content to Sour Diesel, but it leans only slightly Sativa. That means it delivers an effective body high which can relieve pain, but its relatively-robust (about 20%) THC content delivers an energetic head high and works quickly to reduce or eliminate nausea.

This strain also has high levels of the terpenes limonene and linalool, so it’s particularly good for nausea brought on by depression or stress (avoid it if you suffer from anxiety, though). Over time, the energy from the high fades into a relaxing calm state which may let you get some rest after feeling sick earlier in the day.

Here’s a strain that’s probably best used right shortly before heading to bed, or heading to the couch for a long nap after a battle with nausea. Lavender is Indica-dominant, so it hits the body hard and is likely either to put you to sleep or induce you to set up shop on the couch for a while. The THC content in most Lavender flower is slightly lower than our first two choices, so the euphoric high usually won’t hit quite as hard. It’s plenty good enough, however, to stem the tide if you’ve been battling nausea.

Lavender is very good at treating problems in the gastrointestinal tract, which are often the cause of nausea and vomiting, so it’s should be the go-to choice if you know that you’re feeling nauseous due to stomach issues. And even if you’re not sure why you’re feeling so sick, this strain is still ideal for keeping you on the couch instead of kneeling on the bathroom floor.

Those trying bud for the first time, or even infrequent users, may want to look elsewhere for nausea relief. This strain is a powerhouse. It’s just what the doctor ordered, though, for experienced smokers who are looking for quick relief. White Fire OG is Indica-dominant with THC content well over 20% and very little CBD. The head high is energetic and creative, with very little chance of body lock.

The high levels of THC also make this the wrong choice for people who believe their nausea is caused by anxiety since those symptoms could quickly get out of hand. Otherwise, it’s fast-acting and effective, and it produces the type of high that will let you continue to function throughout the day once you’re feeling better.

The THC delivers a head high that’s happy and comforting, but this strain is 80-90% indica, so you’re likely to find yourself headed straight to the couch after ending your bout with nausea. You’ll probably have the munchies, too. Northern Lights is also great for dealing with chronic pain, stress, and insomnia.