How to make your eyes red 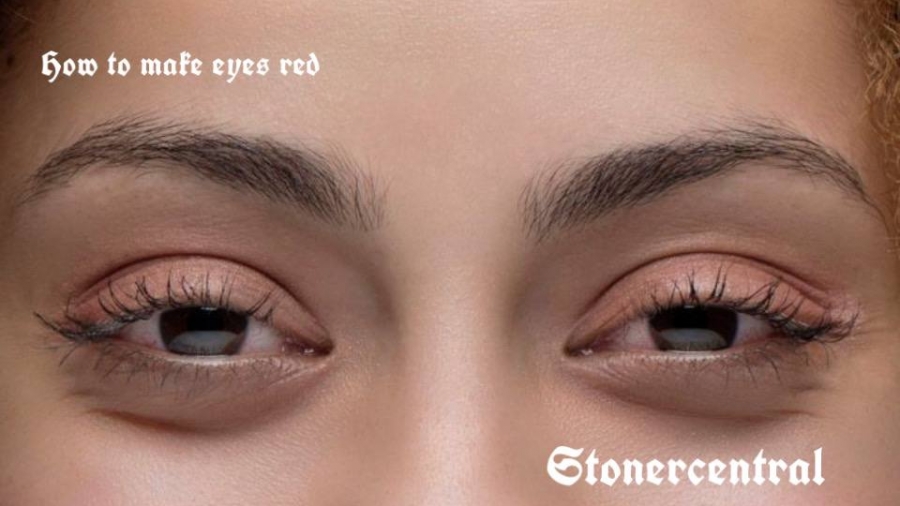 Was this article helpful?Give Feedback

Among the most common effects of marijuana use (and telltale signs you’ve recently partaken) is red, bloodshot eyes. It’s to be expected, sure, but that doesn’t answer the mysterious question pondered by generations of stoners: why does weed make your eyes red?

For weed novices, the onset of bloodshot eyes could cause a panic-induced internet search asking “can smoking weed damage your eyes?” Thankfully, as those who regularly consume cannabis can tell new users, there are no serious health risks associated with your sudden red-eyed circumstance. You’re probably not experiencing an allergic reaction or some bigger complication. Some might poke fun or chastise you for sporting your so-called “weed eyes” in public, but otherwise, it’s a completely natural occurrence that transpires after smoking cannabis.

In fact, your eyes turning red has nothing to do with the act of smoking at all.

After consuming a cannabis-based product (flower, concentrate, edible, etc.), users generally experience an increase in heart rate and blood pressure. This effect is due to the plant’s cannabinoids, which are chemical compounds responsible for some of the therapeutic and medicinal benefits of cannabis, and their initial interaction with the body. This rise in blood pressure and heart rate is comparable to normal physical activities like exercise or sex.

In fact, according to Dr. Melanie Bone, a board-certified OB-GYN who practices in West Palm Beach, Florida, “It’s cannabis’ ability to reduce intraocular pressure in the eyes that makes it a potentially viable treatment for glaucoma, a group of eye disorders that causes damage to the optic nerves which can eventually lead to blindness. It also happens to explain why your eyes become bloodshot after smoking cannabis.”

Evidence that the THC found in cannabis can lower intraocular pressure (IOP) is a major reason why many glaucoma patients have attempted to use medical marijuana to treat and relieve symptoms of the disease. It’s important to know that some studies have contradicted or added a caveat to the claim that cannabis is beneficial for glaucoma. For instance, a 2018 study conducted at Indiana University found that cannabidiol (CBD), the non-intoxicating cannabinoid found in marijuana, could potentially worsen the condition by increasing eye pressure. More research into the use of cannabis for glaucoma treatment is needed.

Do edibles make your eyes red?

Similar to smoking cannabis, ingesting edibles could also make your eyes turn red. Again, this depends on the amount of THC consumed. Remember, it’s not the smoke itself that makes your eyes red, but rather the ability that cannabinoids have to lower blood pressure, causing blood vessels and capillaries to dilate.

The redder the better?

The amount your blood pressure is lowered and how red your eyes become depends on the amount of THC you consume.

Tetrahydrocannabinol (THC), the most common cannabinoid in the plant, is responsible for the intoxication associated with smoking cannabis. The greater the concentration of THC in a cannabis product, the stronger the effects and the redder your eyes become.

So, red eyes can act as a sign that your cannabis has a high cannabinoid content (i.e., it’s potent). In other words, if your eyes are noticeably bloodshot after consumption, there’s a good chance you’ve landed yourself some highly potent weed.

Other than being a dead giveaway that you’ve recently consumed cannabis, you have no reason to be concerned about the redness of your eyes. Cannabis-induced eye redness will typically only last a few hours and can easily resolve if you have the right tools at your disposal.

It isn’t a bad idea to have eye drops (or some sunglasses) on hand. Look for eye drop brands that are specifically designed to reduce eye redness. There are other methods that could potentially help combat cannabis-induced bloodshot eyes, including staying hydrated, washing your face and eyelids with cold water, or simply consuming cannabis products with lower THC levels.

Marijuana use and squinted, puffy and bloodshot eyes go hand in hand, but why? What is it about smoking marijuana that makes you look like you got less than an hour of sleep last night, and what can you do to get your eyes looking normal again?

Before we jump in to how you can get rid of your red eyes, let’s discuss how and when this happens in the first place. Are red eyes a reaction to CBD, THC, or both? If I eat an edible instead of smoking marijuana, will my eyes still like I’ve been staring at the sun without sunglasses for a few hours? Let’s find out!

While bloodshot eyes are common response to marijuana use for many, there are a few primary reasons that marijuana use results in reddened eyes.

The primary explanation happens to also be the reason why cannabis is such an effective treatment for glaucoma: THC lowers blood pressure, and as a result causes blood vessels and capillaries to dilate. Some of these capillaries that dilate happen to be in your eyes, which are known as ocular capillaries. As THC enters your system, your ocular capillaries dilate, allowing for increased blood flow, and thereby making your eyes appear to have a reddish hue.

You might think that if you decide to eat an edible instead of smoking marijuana that you can avoid your eyes reddening, but that’s not necessarily the case. It is the cannabinoids themselves that make your eyes red, not the method of consumption. No matter how you get THC into your system, if the dosage is sufficient, you can expect your beautiful white eyes to become redder than a baboon’s behind very soon.

Another, less common reason, for red eyes resulting from cannabis use is the possibility of an allergy or irritation to cannabis or smoke; however in these cases, the result of reddening eyes is not specific to cannabis, and would likely be a universal reaction to any type of smoke or irritant that touches your eyes.

While red eyes from cannabis use is harmless, many patients understandably don’t want to broadcast their marijuana use to everyone they come face to face with.

And again, it is important to remember that your eyes turning red after cannabis use is not dangerous, and for glaucoma patients the mechanisms that create a reddening of eyes is actually medically beneficial! Now that you are a legal medical marijuana patient in Ohio, don’t be afraid to wear those red eyes as a badge of pride – red eyes mean that you are experiencing the amazing relief of medical cannabis!