How to hide weed in a backpack? 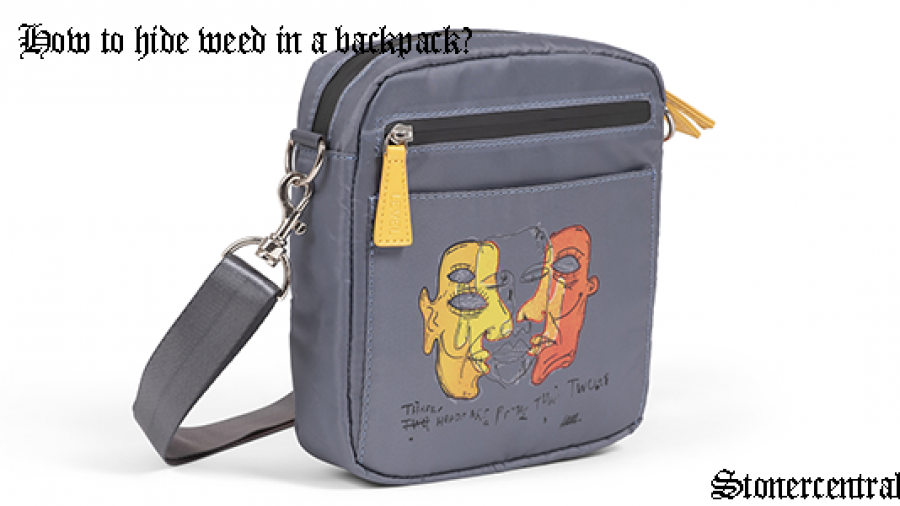 Being a pothead has a lot of perks. There’s a lot of camaraderie in the cannabis community. Studies have shown that there are a lot of health benefits to smoking cannabis, which is why medical marijuana is a thing these days.

However, there are a bunch of issues that make being a pothead inconvenient. Since weed is illegal, you have to figure out ways to stash your weed — especially if you are nomadic and love to travel. Since police tend to search people who smell like pot, it’s important to have a couple of seriously discreet hiding places. Best case, you’re smuggling a vape pen instead of weed. In which case I’ve got just the recommendation for you.

According to longtime travelers and nomads, these are the best places to stash your weed while traveling.

If it’s a few grams put it in a ziplock then get an empty deodorant stick (preferably with a little bit bit of deodorant left and the thing that holds it) take everything out, put ur baggie in the bottom then put the stick back in the deodorant box and close it. if someone opens it they will see the white deodorant and no weed. spray the white part with cologne for extra stealth and do not use the deodorant stick for your body.

If you want to make a point of making it easier to smoke without having to go through a lot of crazy procedures to do so, then the best place to stash your weed on the go is inside cigarettes.

If you can wing a more corporate look and don’t typically have cigarettes around, then you might want to pick up a pack of ballpoint pens for a place to stash your weed.

It’s basically a small-sized weed stash can that can fit in your pocket or purse in a pinch. Best of all, no one ever suspects a pen to be a stash can — ever.

If you are traveling through a major train station, there’s a big possibility of having drug dogs sniffing your bag. This is where using a coffee bag to stash your weed tends to be a good idea.

This trick is fairly simple to do, and the scent of the coffee will throw off drug dogs in most cases. For this, get a good bag of ground up coffee. Grab a skunk bag (smell-proofed plastic) and stuff your weed in it.

Spray the outside of your skunk bag with adhesive, and then cover it in coffee grounds. Shove the skunk bag in the middle of your coffee bag, covering it with grounds.

This can allow you to transport quite a bit of weed without notice.

If there’s anything that people who are searching you for drugs will NOT want to touch, it’s your feminine product stash. So, stoner girls can always use a box of faux tampons to stash your weed.

Doing this is fairly easy. Take your favorite compact tampons in super absorbency. Push the tampon out of the applicator, and jam the skunk bag inside. Then, reseal the tampon bag using a glue stick.

You can easily bring an entire small box of “tampons” with you without raising any suspicion. So, it works pretty well.

Kangol, as some might already know, is a shoe and clothing line that is specifically designed to stash your weed without it being discovered by police. For the most part, cops have caught on to the line’s actual purpose. Some might actually harass you for wearing it — but that’s exceedingly rare.

Either way, Kangol shoes and hats are pretty good places to stash your weed if you’re out on the road and generally are in areas where urban clothing isn’t really noticed.

Hunter S. Thompsonactually wrote about how he stored a ton of drugs in his gas tank, and truthfully, it’s a good place to stash your weed. Most cops don’t check your gas tank, and also won’t check to see if the little flap protecting your gas tank will have weed in it, either.

If you are big on driving and big on smoking weed, it’s a good stash option. However, some might suggest storing weed in the fuse box under the hood instead. Either way,your car can be a good place to store weed when you’re on the go.

No, not the food — the gel bra boosters that are nicknamed chicken cutlets because of their appearance. Many bras will have a special slit that allows women to put these gel pads into their bra for an extra lift.

A good way to get weed through club doors and through a quick frisk, therefore, is to store a skunk bag of weed inside of the bra’s chicken cutlet slit. To totally camouflage the feeling of a skunk bag during a frisk, place a gel cutlet on the exterior side of the slit and keep the bag closest to your chest.

Most policemen will not give a deodorant stick a second glance, which is precisely why it’s such a good place to stash your weed. To make a good hiding nook, grab your favorite deodorant stick and pull the actual deodorant out.

Then, place your baggie at the bottom of the empty deodorant tube. Then, put the stick of deodorant back into the tube. This hides the scent of weed, and also gives you a pretty large amount of space you can use to hide weed if you are smart about it.