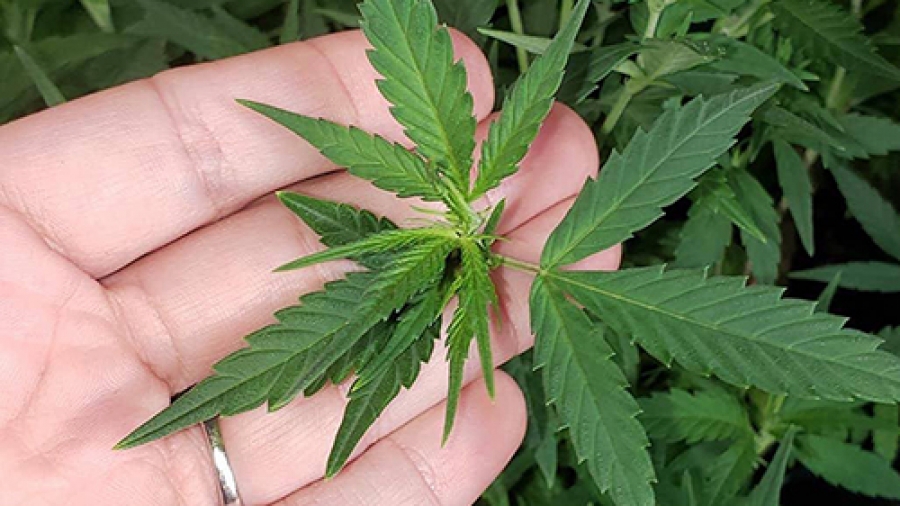 Every cannabis strain is a little different, and some plants grow with more “points” on leaves that others. Most cannabis plants grow a few 3-point leaves as seedlings, but by the time a cannabis plant is mature, the leaves usually have more points.

The second set of leaves after germination usually has 3 points each. After that, leaves normally have more than three.

What is considered a “normal” number of points? Seven is the most common though it varies by strain. Seeing 5, 9, 11 or even 13 points isn’t that unusual. Though typically an odd number, occasionally you’ll see leaves with an even number of points. Your growing conditions affect this, too. Big, fast-growing plants in an ideal environment tend to grow leaves with more points.

Cannabis leaves most often have 7 points

Yet there is a lot of variation between plants, and even on the same plant. This leaf has 13 points if you count the two middle ones!

But what if you had a plant with “normal” leaves that starts growing 3-finger leaves? What does that mean?

It is a stress response when a healthy plant “reverts” back to 3-point leaves. Typically this happens when there are major changes in light quality or light schedule. For example, the following plants were switched from a fluorescent light to a powerful LED. A few days later, all the leaves were growing with only 3 points. In this case, there was nothing really “wrong” as much as different. The plants adjusted to the light and started growing regular leaves within a few weeks.

A change in light schedule can also do it. Plants may grow 3-point leaves if you switch your grow light “on” period from the day to the night, or otherwise give irregular or uneven light schedules.

These plants are growing odd leaves due to re-vegging

For outdoor growers, you can’t control what’s happening in the sky. These outdoor plants in Australia began to grow 3-point leaves after massive bush fires created smoke that blocked out the sun. The odd light periods caused the 3-point stress response.

Smoke blocked out the sun, triggering 3-point leaves in these outdoor plants

Two-toned leaves usually have split coloring in a relatively straight line. This mutation often affects just one or two leaves on the whole plant, though sometimes you’ll get a whole stem or part of the plant that displays this characteristic.

The two-toned leaves don’t seem to have much effect on anything, but it’s kinda cool looking!

I believe this happens due to a type of “variegation” (wikipedia link) and may be due to “sectorial chimera”. Other plants besides cannabis plants can have this happen, too!

This is a mutation I’d love to see on my plants one day Though strangely placed, these buds are like any other buds found on the plant. You just get a couple extra buds encrusted with THC & trichomes!

What’s interesting about this case is that the plant naturally did something that the grower would normally have to do themselves. Cannabis plants normally grow in a triangle tree shape, and growers often must cut or train the plant in order to grow more low and bushy.

Massive foxtailing can be a genetic trait, and certain strains will tend to produce foxtails all over their buds no matter what. This seems to happen most commonly with Haze and Sativa-based strains.

This way that buds can grow is named after “foxtails” because the buds tend to grow in a rounded shape with the fluffy hair-like pistils coming from the end.

Example of healthy foxtailing based on genetics

(notice how there are foxtails all over the bud, instead of just at the top)

However, massive foxtailing is often the result of heat or stress. You know that’s likely the case when the foxtailing seems to be happening mostly in the parts of the plant that are close to a heat or light source.

When a single foxtail keeps growing longer and longer, it is almost always a sign of some sort of major stress to the buds, most often heat.

This massively long foxtail was caused by heat

(it’s basically a very long and thin bud, and will likely never fill out)

It’s completely normal for cannabis plants to have 9, 11, or even 13 points on their fingers. This is just a natural way that some leaves grow. It’s also common to get single-blade leaves growing directly off your colas.

Sugar Leaves Are Normal on Colas

(these single-finger leaves are often called “sugar leaves” and they are much smaller than regular leaves, with a base tucked mostly inside the bud)

A re-vegged plant will grow round single, triple, or quintuple pointed leaves at first, before it starts growing regular serrated leaves.

Re-vegetating a plant means you take a flowering/budding plant and put it back in the vegetative stage. It is also sometimes referred to as “Monstercropping” or “Monster Cropping.” This refers to the fact that a revegged plant will tend to grow much bushy than a plant grown from seed.

Some growers like to reveg a plant on purpose after harvest, instead of throwing it away.